It’s been a long time between quilt club meetings in my neck of the woods with our last one being way back in November, two months in fact. My quilt club, Pinestream Quilters Inc, started the year off with an informal meeting. Instead of the more usual guest speaker, the committee gave the members the opportunity to hold a quilt garage sale. Those who wished to sell some of their unwanted items were responsible to set up their own sales table, run it themselves, including having change available. There was one major flaw to this plan. For some unknown reason, all the tables had been removed from the hall. I wonder why – perhaps they were required at some other part of the complex, or maybe they were being refurbished and having their legs tightened! The down side was that the sellers had to arrange their spare fabric, notions, patterns and magazines on top of a couple of chairs. 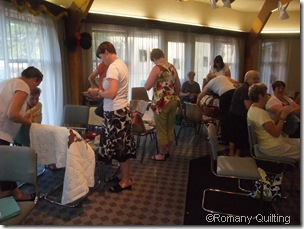 All this selling reminded me of my “other” life many years ago when we owned a dairy in Petone. Standing behind the counter, rolling ice creams, making milkshakes, and selling anything from bread to cigarettes. It was a rather different sort of cliental last night at the quilt garage sale. I sold some orphan blocks, numerous pieces of fabric, a couple of patterns, a bag of checkerboard 2 patches, and some magazines. It was fun, and the buyers certainly picked up some good bargains. 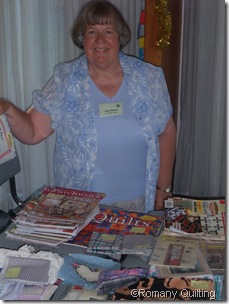 Come and see my wares

What a great idea, it certainly helps 'share the love' of the bits and bobs we collect along the way.