What shall I sew today?

Monday is”roll the dice” day, if I’m home and not tripping around in the caravan.  It’s number 4 today – first time out for my candlewick table-runner.  Sew Wot friend Moira had previously given me eight candlewick blocks which she no longer wanted.  I had used four of the blocks in the outer corners of my candlewick quilt “Whipped Cream and Raspberries – read about this quilt here.  I had quickly assembled three more of Moira’s gifted candlewick blocks as a table runner when I was finishing up this quilt.  Which promptly  got slotted into number four on my List of Six UFOs.

Start of my coffee table runner

Moira had added a touch of colour when she stitched four of her blocks, and I used these three as a table-runner.  And the last block has bright pink flowers so will be the just thing for a label on the back of of “Whipped Cream and Raspberries” quilt.  I had the perfect fabric for the runner, a piece left over from my daughter’s 50th birthday quilt in cream, pale pink and green.

The next step was to add the side borders and get it layered and pinned.  Then I did stitch in the ditch quilting around the three blocks to hold everything in place. 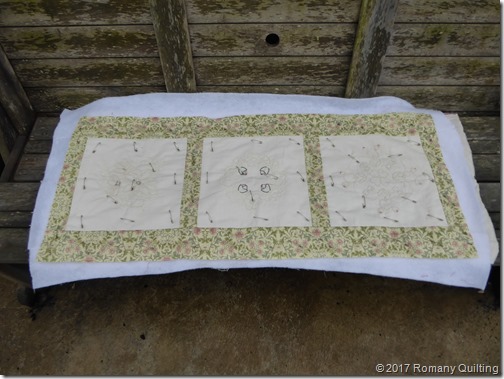 The next job is to add more quilting – perhaps I’ll leave that till tomorrow.  With just a couple of appointments this week, I’m hoping to get it all finished and bound by the end of the week.  That’s the plan, anyway.
Posted by Jenny at 3:57 PM

This will be a lovely finish Jenny - and great that there is a spare block for your label too! Your roll the dice method really is a great way to get through your projects isn't it - and keeps it fun and interesting too!

All caught up again Jenny on your posts. Beautiful stitching from all your stitchy friends and I love this candlewick table piece. Delicate and pretty. Heavy rain here making slushy snow underfoot but temperatures much milder.

The orphan candlewick blocks look great as your table runner.. good luck getting it finished by the end of the week.

looks lovely with the sashing and border, have a good week.

It sounds like you may have to add another project to your list next week, as this one will be finished. A great way to use the orphan blocks.

What a pretty table runner. I always love making small items like this.