My candlewick quilt is coming along steadily, and I’m pleased that the roll of the dice has selected this project two weeks in a row.  And I’m really pleased that this week is reasonably free so I can slot in plenty of sewing time.  I really would like to get this quilt top finished this week.  Then it will be off my List of Six UFOs and I can add another one to take its place. 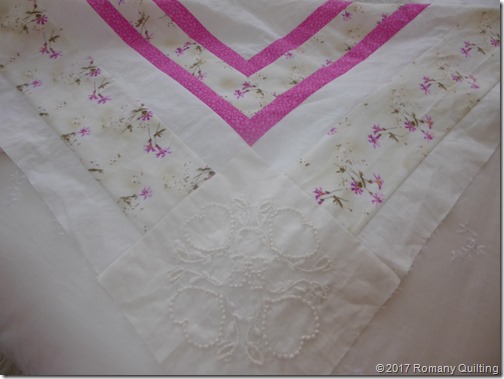 My ideas for the borders has been governed by how much of the floral fabric I had left.  The strippy borders with extra cream homespun doesn’t look too bad, I feel.  And I was very lucky when Sew Wot friend Moira has some candlewick blocks looking for a new home.  I happily took them off her hands and have incorporated four of Moira’s blocks into the corners of my quilt. 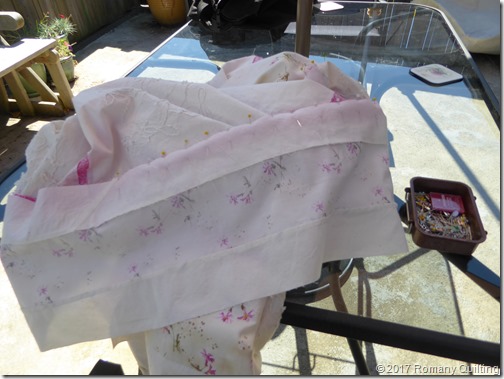 Under the shady umbrella

Adding the borders around the quilt calls for a lot of measuring, cutting, and pinning.  It’s good to get away from the sewing room and I have been pinning the borders using the table outside on the patio, under the sun umbrella.  I can hear the birds chirping away,  and enjoy being outside in the fresh air.
Posted by Jenny at 4:19 PM

How nice you can use your friends orphan blocks in your pretty candlewick Quilt..
Great to be able to work outside and listen to the birds sing 🎶

Adding blocks in the corners was a great idea, and using your friend's blocks makes the quilt even more special. Sitting outside as you work must be delightful.