The smell of freshly baking pizzas filled the air as we sat at a table in the Beach Road Deli at Paekakariki, sipping on our lattes. We were waiting to make the acquaintance of Lis and Alan, who had come across on the Inter Island Ferry from the South Island, arriving in the late afternoon. No doubt by the time they disembarked and got on the motorway, they would get caught up in the homecoming commuter traffic. Lis is a fellow blogger and the pair of them have been enjoying a leisurely holiday around New Zealand. She very cleverly arranged the South Island part of their holiday to include the mini symposium at Timaru last weekend. We had never met before but had exchanged friendly e-mails trying to arrange a suitable time to finally get together. And then a car pulled up, that must be them, they certainly look like those photos on the blog!

You know what it’s like when quilters get together, even if they haven’t met before, it’s just chatter, chatter, chatter. The the two husbands weren’t doing too bad, either. We decided to share one of those delicious pizzas as we got to know each other a bit better. 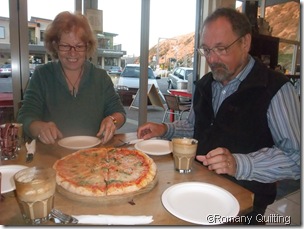 Lis and Alan looking forward to a slice of pizza

I had a little something tucked away in my bag for Lis. A copy of the latest edition of the New Zealand Quilter magazine, hot off the press. And a cute little Kiwi block sporting a Christmas hat. That will help her remember New Zealand when she gets home. 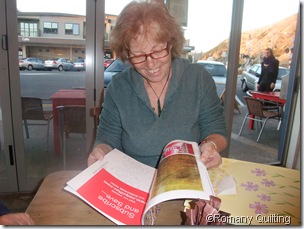 They told us about their trip around New Zealand, and we countered with tales of our recent UK trip. The bells rang loudly outside as the train barrier arms came down as one commuter train after another pulled up at the station to disgorge the workers. The Deli was doing a roaring trade as customers called in to buy something to take home for their dinner. The pizza got eaten, and my coffee was refilled, and still we talked. 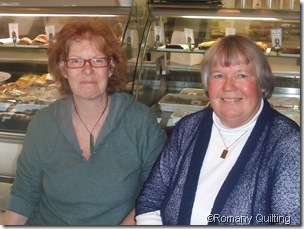 It was so nice to and finally meet in person, after exchanging e-mails. Check out their travels on their blog