Hanging proudly in the RSA (Returned Servicemen's Association) rooms in Paraparaumu is a lovely quilt paying tribute to the Anzac soldiers. It combines stitcheries with pieced blocks, photo transfers, fabric with New Zealand designs, and the border features red poppies. The words “Lest we Forget” are appliquéd in red on black. 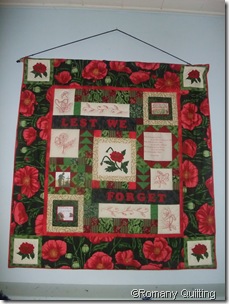 I was particularly taken with the photo transfers, which add a nostalgic touch. Set in the centre of a star block, this one shows a soldier standing at the grave of his fallen comrade. 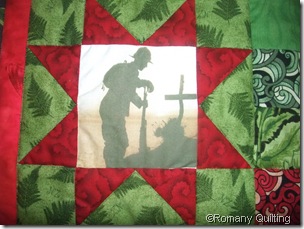 A beautifully appliquéd poppy is placed in each corner, with a larger poppy in the middle of the quilt. The words to the Anzac poem is stitched in red and placed to the right of the centre poppy. 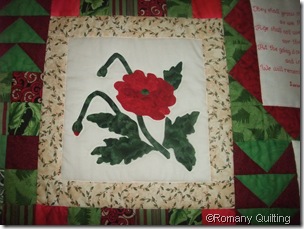 The quilt was made by three local quilters and presented to the RSA in 2005, to commemorate the 90th anniversary of Gallipoli. What a beautiful gift and I am sure it has been much admired. 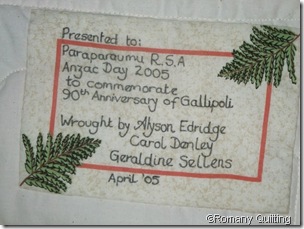 Label at the back of the quilt

I would love to hear from any of the ladies who combined their talents to make this quilt, and find out the story behind it’s construction.

Technorati Tags: Anzac Day,Anzac quilt,RSA,Gallipoli
Posted by Jenny at 9:54 AM

Great quilt isn't it Jenny, I have linked to your post from my blog.

Thanks for that Lis. Now you be sure to whip up a batch of Anzac biscuits today.

Thanks for showing us Jenny
Munaiba

It's a lovely quilt. Well done those 3 women who made it. Thanks for showing us the quilt.

The quilt certainly is a a masterful piece of work .