A new week, and a new roll of the dice – the number of my UFO project this week is 6.  Which is the mega churn dash duvet cover.  Oh good, that project hasn’t been chosen much lately.  So far, I had stitched that giant churn dash together, making the top of a new duvet cover. 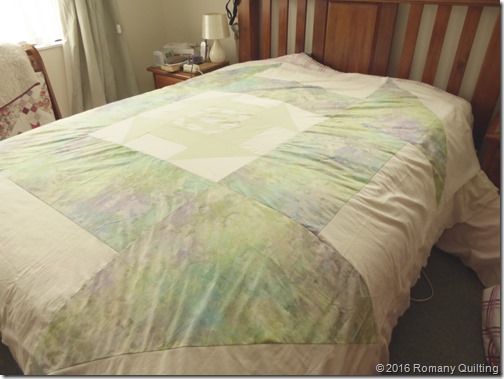 Top of the duvet cover

But a duvet top isn’t much good without the backing, so that’s what I was wrestling with today.  Using an old sheet, I carefully measured it against the duvet top, and you’ve guessed it, not quite big enough.  So I pieced and added extra fabric down one side.  That’s an awful lot of fabric to be dealing with and made me wonder why I was bothering.  Yes, I know that I could probably go out and buy a new duvet cover  without all this hassle.  But the answer is that I wanted to try the mega churn dash design,and had the pretty green fabric to make it with.  And think how pleased I’ll be when it all comes together! 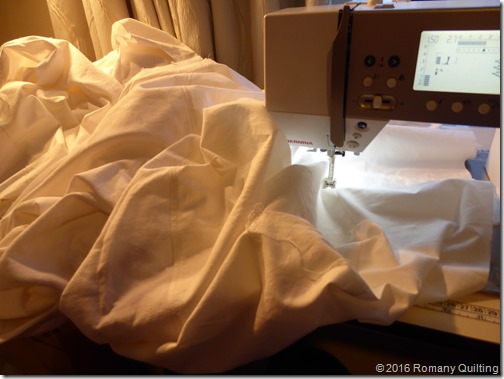 Adding a little extra width to the backing

As it turns out, the old white sheet I’m using is practically an antique.  The name “Briggs” was marked onto one edge, which happens to be Robin’s Mum’s maiden name.  We can only suppose that Bonnie cleared out her parents linen cupboard when they passed away and took the extra linen home with her.    As I did when Robin’s Mum passed away.  No one else in the family wanted anything much from Bonnie’s linen cupboard, so I took some old sheets home with me to possibly use as quilt backings.  I’ll be sure to include this snippet of information when I write up my quilt documentation. 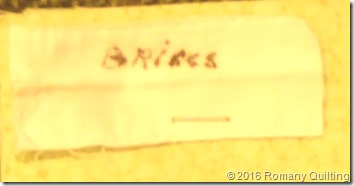 I haven’t really got much to show for my couple of hours in the sewing room today, but in reality I’m one small step further on.  I should be able to do more work on the duvet cover during the week, all going well.  So watch this space.

With several UFO projects crossing the finishing line over the last few weeks, the List of Six now has some new additions.

Numbers 2, 3 and 4 have not yet been called up, so they are still a bit of a mystery to you all.  Not to me though, I know they have been there all the time, lurking in various secret places!

Things are moving ahead with three new additions, and three old favourites.  It’s always exciting to see what number the dice calls up each week.
Posted by Jenny at 8:20 PM

It's a good feeling when you finish something that has been around for a while. Your duvet cover looks pretty, I'm looking forward to seeing it completed.
I think many of us crafters and quilters would head for the linen cupboard when it comes time to deal with a loved ones belongings. So many treasures to be found in there.I have a cotton pillow case hand embroidered by my grand mother and one or two items made by mum.

I have a bedspread that was in about 1938 or so, an embroidered tea cloth the same, and the last of the sheets from 1962, I guess they were part of what some might call " a dowry" in those days a glory box full of sheets, blankets towels and more, before we were married. This is a wonderful memory, and to think it will be part of a quilt now, is so special.

The old white sheet I'm using is in excellent condition, and very good quality, sort of a twill fabric. They don't make sheets like that any more! And it's nice to think that a sheet from Robin's Grandparents home is now being used on our bed as part of my new duvet cover. How is that for recycling!