Another week – and another UFO finish!  Although I didn’t finish my mega churn dash duvet cover till early last evening (Sunday) so the light was not good enough for photos.  But here’s a couple of Monday photos, although I’m claiming it as a finish for last week. 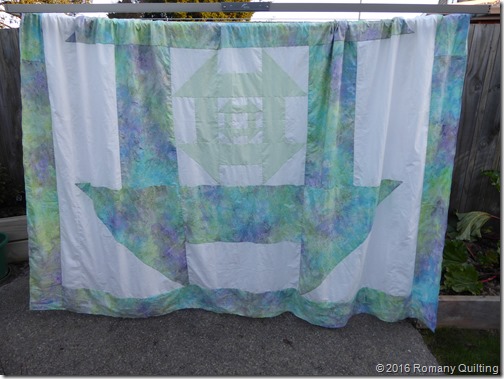 Duvet cover on the clothesline

I added a strip of the pretty green, blue and lavender, speckled with gold fabric down the two sides, and across the bottom, where it hides the button fastening. 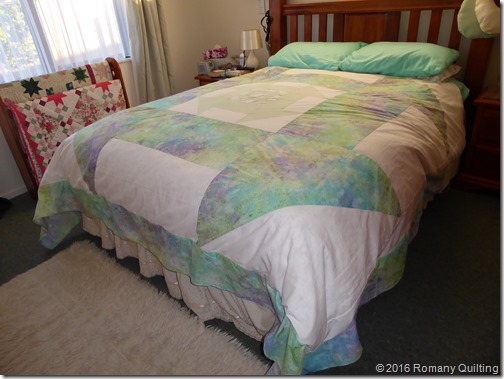 We always have a quilt on top of the duvet, (I am a quilter, after all) during the day anyway, although we do remove the quilt when we go to sleep in the warmer months.  So the new duvet cover won’t really be seen too much.  I’m pleased I persevered and made it, although it was a bit difficult manipulating all that fabric.  But as I said earlier, I really wanted to try out the mega churn dash design, and yes, it really is mega.  And the green fabric was just sitting in my stash, waiting for inspiration to strike.

The really nice thing I got out of this project (wrestling with all that fabric doesn’t count) was discovering that the old white sheet I was recycling for the back had quite a family connection.  The name “Briggs” was marked onto one edge, which happens to be Robin’s Mum’s maiden name.  We can only suppose that Bonnie cleared out her parents linen cupboard when they passed away and took the extra linen home with her.    As I did when Robin’s Mum passed away.  And I stitched 15 pyjama buttons on the button band, digging into mother-in-laws button collection which I now have in a big jar.  Perhaps they were snipped off and saved from Robin’s outgrown pyjamas when he was a little boy?  That’s what I like to think, anyway.

And no – I doubt if I’ll ever make another duvet cover again.  Once was enough for me!
Posted by Jenny at 5:17 PM

Lovely Jenny, that soft patterned fabric is gentle, and goes so well with the mega design. Buttons, always good to have some on hand.

Your Duvet cover looks fabulous on your bed sew worth all your work..how nice to have some family connection with the sheet backing and buttons....

The repurposed family sheet and buttons make this project quite special indeed.

It loks fantastic. And made even better by the heirloom connections.

Well that’s just fabulous! I know people make duvet covers, but I haven’t had the urge to try it. Well done you! :-)

That design is really "mega" and it looks stunning on the bed. I can't imagine making a duvet cover, I have enough trouble getting the bought ones on the duvet!! It is so lovely to use old linens, old buttons, especially when there is or you can imagine a story attached, very special.

That's a lovely design in beautiful colors, but I can understand why making one was plenty for you. It would be for anyone, I think! I'd have to have a duvet before I needed to make a cover for it. =)

I love your mega finish but like you, I have a really hard time handling large pieces of material. Eventually I will only be able to make mug rugs, I think. Love the idea of using the old family linens and buttons. So special.