It is nice to say hello again to the horses and UFO number 5, which I am making for my grand-daughter Emma, and  came up on the dice roll today.  It’s been a wee while since this quilt surfaced, and I’m pleased the number rolled around again. 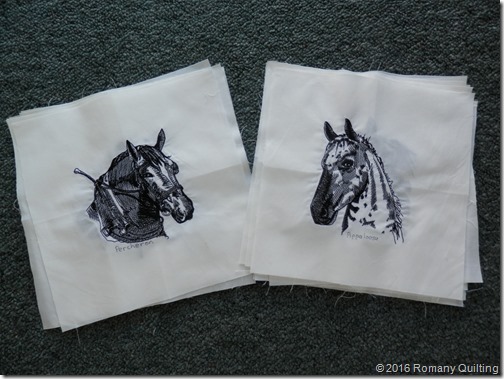 There are different horse breeds featured on this quilt

The middle portion had been previously sewn together over the last few months, so now I just need to add a couple of extra rows to the top and bottom of the quilt.  So today I pinned, sewed then pressed two rows.  Next I need to add a line of sashing strips at the bottom of each row of blocks before attaching them at the top of the quilt. 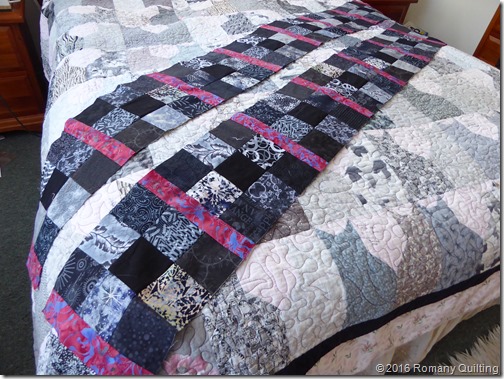 Stitching another two rows together

As an avid “leader and ender” fan, I’m also using a pile of half square triangles (from another project which hasn’t made the UFO list yet) at the beginning and end of my stitching.  But it really doesn’t matter how long I’ve been doing this quilting business, I still make mistakes.  Can you see what I’ve done? 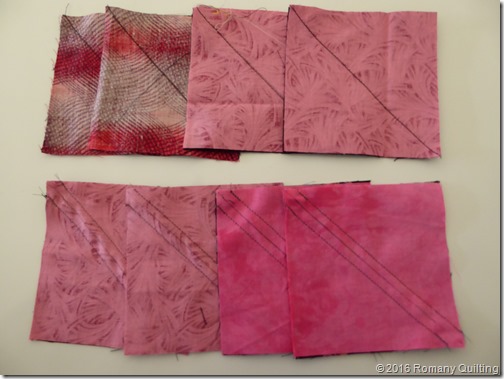 After carefully drawing a line across the squares, I then sewed along the line on the top four squares – I had stitched along the cutting line.  Instead, of course, each side of the drawn line, as I’ve done on the bottom squares.    Luckily there are only four small blocks to unpick and re-stitch.  That’s why I’ll never be an award winning quilter!
Posted by Jenny at 5:40 PM

Hehe not the first time that's been done - nor the last I bet!! I don't even bother to unpick that mis-sewn line nowadays as it will be cut along anyway! Emma will be happy to see the horses re-emerge! :-)

Thanks for the tip Raewyn. Don't know why I didn't think of that myself - after I patiently unpicked those stitching lines. Of course I would be slicing straight through it - silly me!

Oops! Good luck on making progress on this one.

Yes, Raewyn's thought was mine. You're going to cut it anyway, why bother to unpick it? I usually do the opposite. I make so many HST that when I DO have to stitch on the middle line, I often find myself stitching right in the fold (because I press a fold instead of drawing a line) instead of 1/4" away. But it all worked out, right?

I have made that exact mistake Jenny. I guess we see the line and immediately think to sew along it. Sadly I'm glad to see I'm not the only one who makes mistakes. The horses are beauties.