I’m on a roll – three, no, make that four finishes in three weeks!  Can you tell I’m feeling rather pleased with myself?  Mind you, three of these four finishes were partially/almost completed, but it’s still a great feeling.

I’ve just finished putting the last stitches in the hanging sleeve of International Maples.  Like most of my UFOs this one has been hanging about for a while.  Way back in 2000 I took part in an international block swap organized by Morgan of Down Under Quilts (DUQ) Internet quilt group.  The idea was to stitch a maple leaf block using fabrics which related to your home country. 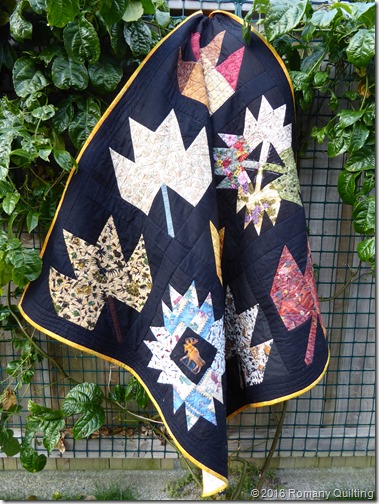 I have used seven large maple leaf blocks, and two sets of four little ones in my quilt.  The blocks arrived from Australia, New York, Ontario, Alberta, Indonesia, plus mine made with a New Zealand inspired batik.  Sadly, over such a long time, I have misplaced the names and origins of the other blocks.

The blocks languished in a bag for quite a while, until I finally decided to “just do it” and assemble them.  The quilt top was then layered and pinned, and was added to my UFO List of Six when I decided to get serious about my indecent number of UFOs.  And finally, it’s finished. 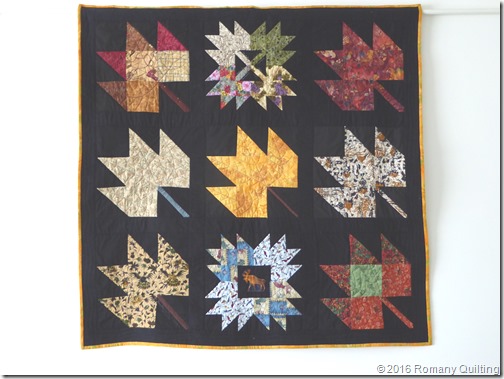 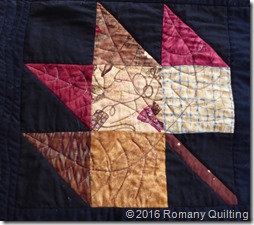 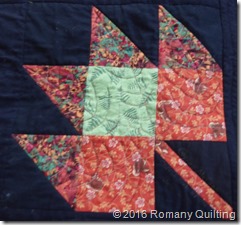 Cowboys and lassos from Calgary, and autumn colours and squirrels from Adirondack Mtns 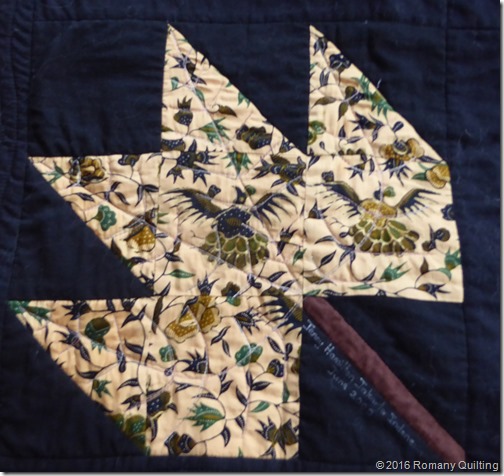 And from the Swap Hostess, who lives in Adelaide, Australia, who chose to make four small blocks.  The pale block features motifs from the indigenous Aborigine people, and the green fabric shows the outline of Australia and the Southern Cross star constellation.  The grape fabric acknowledges the world famous Australian wine, and the floral block features some of Australia’s unique wild flowers. 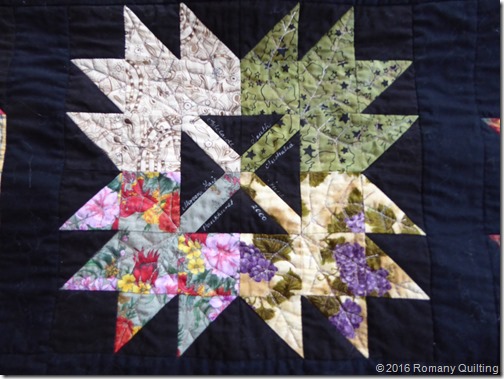 And from the Swap Hostess, who lives in Adelaide, Australia

I am thrilled with my finish, and feel the quilt turned out wonderfully well with all the different fabrics glowing against the black background.  I machine quilted in the ditch around all the blocks and sashing strips.  And then, with a little trouble as I'd forgotten how to go about it, I free motion quilted veins in all the maple leaves using variegated thread. That gave some texture to the blocks.   Many thanks to all the quilters who took part all those years ago.
Posted by Jenny at 11:19 AM

Wow Jenny, you are on a roll, it's a good feeling to finally get a UFO finished and your International Maples quilt looks fantastic.

Congrats on your UFO finish, the blocks are all unique, some lovely fabrics amongst them. Enjoy the rest of the weekend.

It’s fabulous! It certainly is a good feeling to finish our projects. :-)

And all done in time for Canada Day. You are really getting so much finished, and quilted, the ( IMO) in my opinion, hardest part of all.
A bit wet outside, after a very cold morning yesterday. Love those leaves, I can see this one might be on the wall soon.

Congrats on your finish....its beautiful!

It looks beautiful Jenny. I have wanted to make a maple leaf quilt for a long time now. One day I will, and add that to my long list of UFO's LOL.

Love all the thought that has gone into each of the leaf blocks! Great job!

It looks lovely. I especially like that beautiful golden yellow leaf in the centre. Great finish.

A lovely finish to a delightful quilt. Is the sizing a wall hanging? Do you get to keep it or send it to the person who started it?

Thanks to all for your comments. This was a great swap to be in, we all made X number of blocks, which were posted to the swap hostess. She then shared them around the others involved and sent us back a nice assortment of different blocks. I am keeping this wall hanging, and it will be up on display just as soon as I've taken it to my next quilt club meeting for Show and Tell.

Congratulations on such a beautiful finish, Jenny! Of course, as a Canadian, I love the Maple Leaf. The blocks are all sweet and the quilting is gorgeous!

What a sweet quilt and what a great idea that swap was. Maple leaves make a great motif, but maybe I am a little biased. :)