It’s binding time – with two quilts collected from local quilter, Paula of Rabbits Patch Quilting.  One is a quilt I’m making for a friend’s grand-daughter and the other much smaller, my Aussie Adventure quilt.  I had every intention of quilting this smaller wall-hanging myself.  But my attempt at machine quilting was disastrous, puckers underneath which meant I had to spend some time with my quick-unpicker.  So in the end, I decided to bundle it up and take it to Paula to do as well as the other one – I had decided on edge to edge meander patterns. 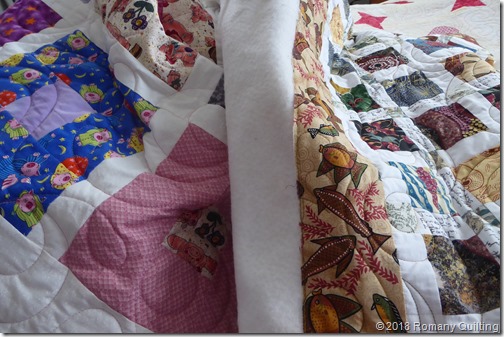 I’d prepared the binding for both earlier and tucked it away in a safe place, so safe I couldn’t find it at first.  There it was hiding under yet another UFO. 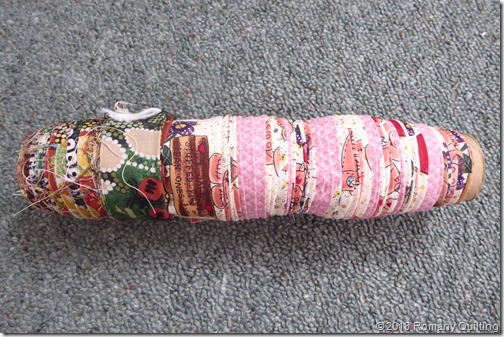 Something I prepared earlier, as the cooks say

Yesterday I machine stitched the binding on both quilts, using the walking foot.  You may remember that I’d having all sorts of bother finishing the final seam neatly, and getting in a real pickle.  But thanks to Linda of Razzle Dazzle Quilter fame who sent me this link,
https://www.facebook.com/MichellesPatchwork1/posts/10204377984125767

I’ve finally found a quick and easy method to complete that pesky final seam.  Perhaps I’m the only one who fumbles over this last step, but now I’ve got the answer.  Thanks Linda, for your help.

So I’ve spent a wee while pinning the binding down ready to hand stitch, something I can do while watching TV tonight.  Still haven’t bought any of those new fangled binding clips, I really must see about getting some.  This is a big quilt, so no doubt I’ll still be working on it tomorrow too. 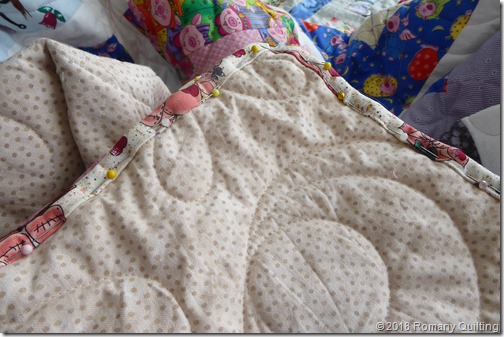 Are you ready on another update on our kitten Gemma?  She was spayed last week but her post op appointment showed that it wasn’t healing as it should.   The vet started to clean the wound then suggested that we leave her behind so that she could be put out and worked on properly.  Although Gemma couldn't actually reach the site to lick it, she was trying hard, and I think the edge of the plastic cone must have been rubbing against the wound and it got inflamed.  So she went back on the op table, had the wound cleaned out, the edges tidied up and stapled, and a bigger cone on her head.  Poor little thing, all this is taking much longer than anticipated, and we have extra antibiotics to keep poking down her throat.

Today while I was sitting at the dining table with the sunshine streaming in as I was doing all that pinning, Gemma was stretched out on the carpet, enjoying the warmth.  It’s so nice to see her relaxed and happy, but I know she will be pleased to get rid of that cone off her head! 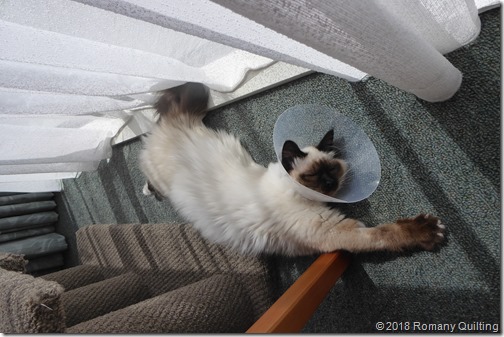 Relaxing in front of the sunny window
Posted by Jenny at 5:05 PM

Always love doing the binding....bonus when its all sorted ready to go. Your poor kitty....glad she has accepted her stylish collar lol!

I'm sure those cones around the head much be uncomfortable on pets but so needed in times of healing - hope she comes around soon.

I'm with you on struggling getting the binding joined. I'll have to have a look at the link you have provided. Poor little Gemma. It's good that the vet is taking such good care of her. She certainly will be happier once the cone can come off.

Pleased you sorted your pesky problem and the quilt is ready to hand sew.
Poor Gemma, do hope it heals soon and she can be cone free.

Well done sorting out your binding problems. Great to see the binding ready to finish.
I do hope that Gemma bounces back quickly this time.