One of those Days

Do you ever have one of those days when nothing seems to go right?  I wanted to do a quick bit of machine quilting “secret sewing” with my walking foot but the stitching just wasn’t going well at all.  Something was wrong, but what?  Perhaps it was the reel of thread I was using, I admit it was an old reel I’d picked up somewhere along the way.  No change, so I took the walking foot off and reattached it.  No difference, but the foot didn’t seem to be working as it should as the layers were shifting.  The backing fabric I had chosen was puckering, so maybe it was a mixture and not quilting fabric quality, so that was changed as well.  Each of these changes entailed a whole lot of unpicking, some more careful pressing and pinning, and a whole lot of time.  I concluded that my machine was due for a service, and I’d get the walking foot checked out as well.  What a pain, I’d wasted hours with nothing to show in the end.

Interesting though, was the fact that there was no problem with ordinary stitching.  So I joined a few lengths to make some binding for my hand quilting project, and prepared a hanging sleeve.  Thank goodness that small job went well. 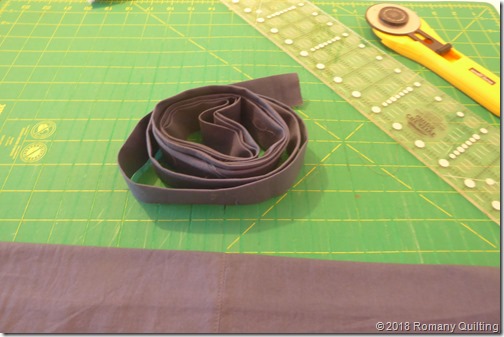 It was time to roll the dice again, and with two projects on my List of Six up to the machine quilting stage, I had previously been hoping, before my troubles started,  that one of these would see the light of day this week.  But it seems it will be mostly hand sewing this week, as the dice landed on number six.  Which is, after several years of neglect  “Yo Yos – just do it” with all sorts of bits and pieces tucked away in this bag. This might take a bit of sorting out before I actually start – wish me luck! 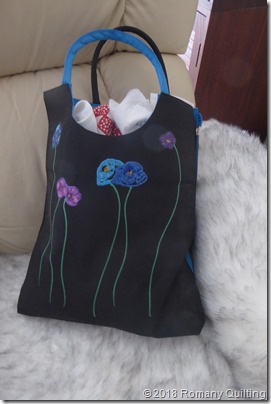 Yo-Yos hiding in this bag

Winter has officially started down here in New Zealand, and will continue during the months of June, July and August.  It’s one of those cold, damp days today, so I’ve got my crock-pot (slow cooker) looking after the evening meal for me.  I’ve prepared steak and kidney casserole with heaps of veggies added in.  There's something quite therapeutic chopping up the meat and browning it, chopping and slicing carrots, parsnips and onions to add to the meat.  And then you get that lovely smell of slow cooking wafting through the kitchen as meal gently cooks all day – I love winter food!
Posted by Jenny at 10:53 AM

I had a lot of trouble once with the walking foot and then realised I hadn't attaching to the screw that makes it fed, did you check that or did drop the fed dog ??????? Sometimes I forget these simple things..
Have fun sorting your bag of YoYos....

Don't you hate it when things won't play. I hope you can get it sorted out fairly soon. We had slow cooked steak and kidney recently. It really is comfort food at its best. Enjoy working out what you are doing with your yo-yos.

Winter comfort food is hardy and tasty, too. I use my crock pot more in the winter than in the summer.

Did you try replacing your needle? Sometimes it can be the culprit to stitching difficulty.

It sounds very frustrating and I hope it's just a simple fix in the end. It's about time I got my machine serviced but I don't want to be without it...! Just as well you have plenty of handsewing to do while you wait. (as I would have too!) Have fun with the yo-yos :-)

What you describe Jenny, happens quite a lot for me. I'm always having to sort through something going wrong,etc. I wind my own bobbins and sometimes that is the issue; I also have one white cloth that will cause problems and I hate to discard it because it is very white, strong and very smooth so feels good in a project. It must have been a sheet originally because I still have some it around.
Oh, you can't beat the idea of something home made cooking away for supper. I love your description.
We are launching into summer now with a bit of heat and all the growing things.

I love putting on the slow cooker at the start of the day and knowing that no matter what happens there will be a tasty meal ready in the evening.
Hope you sort out the machine and walking foot. Sometimes and service is not a bad idea. Just a shame about all the wasted work.
Good luck with the yo-yos.