Roll the Dice – Pink or Blue?

In the weekend I did an unscientific experiment with my dice.  As you know, I like to give my pink dice a shake, rattle and roll on the carpet to determine which UFO I will be working on for the current week.  But I’ve long suspected that not all numbers are coming up regularly – in fact, I don’t remember number 6 being selected for many months.  So with Robin’s help as scribe, I rolled my pink dice, just as I usually do, ten times.  Interesting enough, two numbers did not get selected at all.  Perhaps that is what “the dice is loaded” means.  Mr Google tells me, that when  the dice are loaded, weight has been added  to one side or another of dice so that they will always come up with certain numbers facing upward. 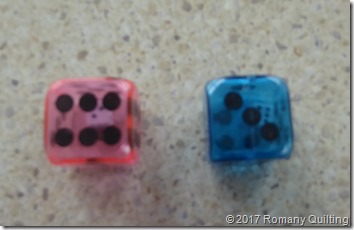 Luckily the bag of dice I purchased from the $2 shop contained several more of different colours.  So I repeated the experiment with the blue dice, and this time all numbers came up.  Strange but true.  Robin doesn’t think this proves anything and tells I would be better off using a random number generator each week instead.  But I feel that’s a bit too new fangled for me and would take all the fun out of choosing a number.

My pink dice has been pensioned off, and it’s blue cousin had a turn.  It’s a new project, first time called up, and this week I’ll be working on my New Zealand native bird wall-hanging.  What's in the bag?  Let’s see how much of this I had actually started.  Lots of birds cut out with fusible attached, all ready to be appliqued. 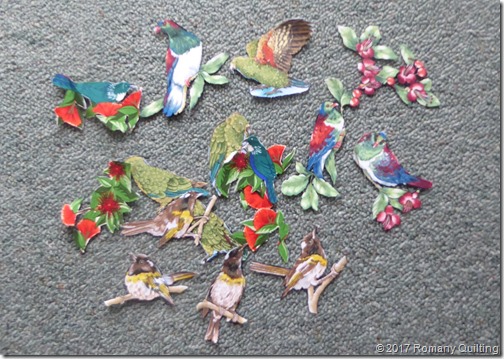 Birds cut out ready to applique

I've had a busy morning out and about, doing a few quilty things, such as buying more batting, and some cord for a future project.  Did a little shopping, and went to the library – I just can’t live without a book or two to read.  And just look at this lovely sight I saw while I was driving around, the first sprinkle of snow on the Tararua Ranges.  In our part of New Zealand the snow seldom falls on the ground.

First snowfall of the season

So I didn’t really feel like sitting at the machine in the afternoon.  But at least I know where I’m up to,  and I’ve also prepared some “leader and ender” sewing as well, and hopefully can make a good start tomorrow.
Posted by Jenny at 3:33 PM

Very interesting about the dice. I think I need to follow your lead and use your system. Only trouble is I don't have much time for stitching my own projects.

Snow, I knew it was close. Does it make any difference if you roll the dice onto a hard surface? The little birds look great.

Hmm, I'd use the blue die if it gives more number selection. Looks like you've done a lot of prep work already for the wall hanging. Enjoy your stitching.

Yes that is interesting with your dices...
Your NZ birds 🐦 will make a nice wall hanging...
That snow ❄️ looks lovely....

I could just imagine one of my sons saying that I should use a random number generator rather than rolling of the dice - difference between the male and female mind?

Let the blue dice rule for now and let us see how your applique project progresses this week.

How interesting to use dice to decide what you'll be sewing this week. :)