It was time to get started on those black homespun borders for grand-daughter Emma’s horse quilt.  So the first job was to stitch several lengths of the border fabric together, and give it a good press.  Then I pressed the top, measured it carefully, measured and cut the first border to size, and got pinning.  Lots of pins – that’s how I like it, the more pins the better. 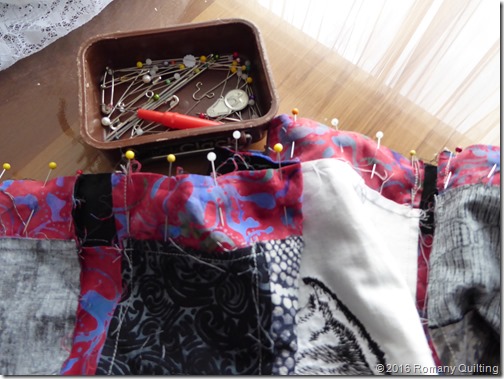 I know I’ve said it before, but I really like utilising “leaders and enders sewing” when I’m working at the sewing machine.  And I have to admit that I’m quite well organised at the moment.  There is one lot of “darks” for when I’m stitching with black or dark grey thread, and another lot sitting there waiting for when the machine is threaded up with light thread.  All this leader and ender sewing is bonus stitching, as far as I’m concerned, and the pieces getting stitched really mount up quickly.  That's one border on, three more to go. 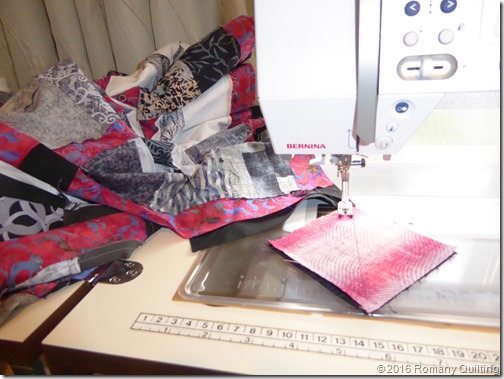 Finishing the seam with an ender – for another project.

With so much machining done lately, I’m almost out of cream thread, and getting low on some others.  A visit to Spotlight while we were in Palmerston North soon fixed that.  And I received a 15% discount with my Gold Card, so that was a bargain. 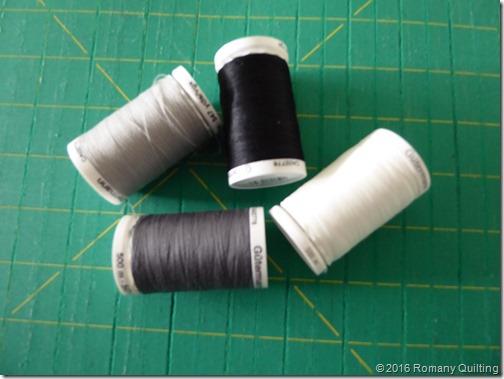 Replenishing the threads
Posted by Jenny at 7:54 PM

Getting there with your GDs quilt...

Looks like you have Gutterman as a favourite thread too. I always make sure I have cream, white, black and that pale taupe I use for joining almost everything. Good idea to have those enders saved for something else.

I like to machine sew with leaders & enders. The bonus units are ready in no time. Love the string blocks you made.
Have a great week
Ivani