We woke to a lovely Saturday morning and looked out the window.  The sun had risen in the east, and the full moon was up in the west. The morning sky had just the lightest touch of pink, which doesn’t really show in the photo.  So with the sun and the moon in the sky in the same time, it look’s like we are getting a two for one deal today, wouldn’t you say! 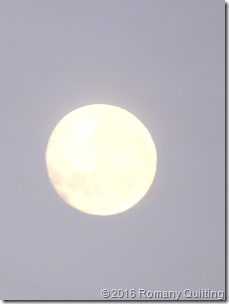 Full moon in the morning sky

In between hospital appointments this week – nearly over, thanks for your concern, I worked on the checkerboard borders of my caravan quilt.  More by a stroke of good luck rather than any particular skill on my part, the side borders fitted exactly down each side of the quilt top.  As this is a square quilt, it followed that the border would also fit on the top and the bottom. 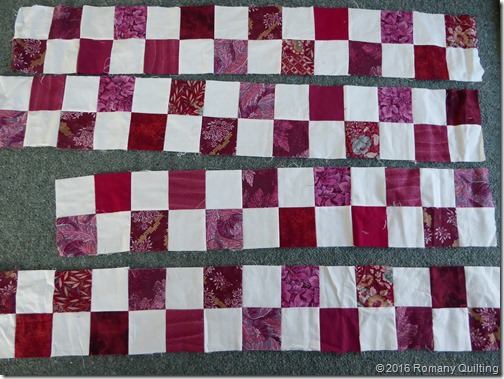 But…….. when I went to lay the last two borders in place across the top and bottom, the coloured squares weren’t playing nicely at the corners at all.  Instead of following on burgundy, white, burgundy, I had two whites side by side, plus two burgundies.  How an I going to fix this, I wondered, without pulling everything apart?  So I started playing  around with a couple of four patches and finally folded one in half and laid it over the other.  That should do it – pinwheels in the offending patches.  Problem solved! 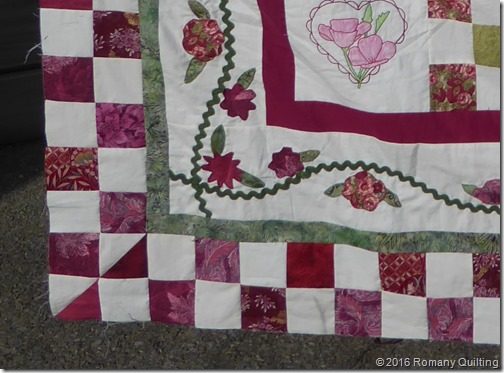 Solution to the corner problem

With the problem of the corner blocks solved, I just had to pin the top and bottom borders in place, (I like to use lots of pins) stitch them on, give everything a good press, and finally, another top finished.  This project is UFO number one on my List of Six, finally completed. 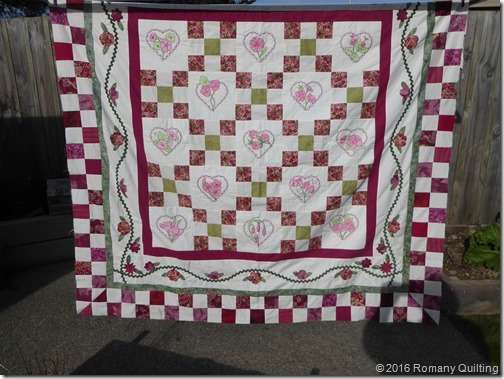 Quilt top for our caravan – finished

The stitchery designs used are “12 Days of Redwork”, by Alex Anderson, although I had to add another design as I needed 13 stitched blocks.  I have happy memories of stitching them while travelling around New Zealand in our caravan.  The flowers and leaves were then coloured in using fabric pens.  And I must say – I love how it’s all come together.
Posted by Jenny at 3:27 PM

Brilliant idea to use the pinwheels at the corner! It's a beautiful quilt, Jenny!

How clever are you Jenny... The pinwheels look perfect in the corners....
Pleased your appointments are nearl,y over....

Happy to hear you are recovering. You are really putting a dent in your WIP list. Thanks for sharing your clever border fix with Oh Scrap!

Woo hoo! How good to have another finish. Very ingenious with the corners. They really do set it off.

wonderful fix and a lovely quilt.

What a pretty top. xx

I love this top, too. Brilliant solution for the corners, and they look just right to my eyes: interesting and comfortable. Good job on your treatment, I am glad the cycle is almost over.