Finished just in time for Christmas

It’s always nice to stitch homemade gifts, especially when the recipient has actually asked for something.  I had a few leaf applique shapes left after completing a quilt for my daughter’s BIG 50th birthday back in August, (see quilt here) and when I mentioned this to her, she said she would like a cushion.  So cushions it was, for her Christmas gift.  I don’t know why I put off stitching them until last week, but they didn’t take to long to whip up, just as well. 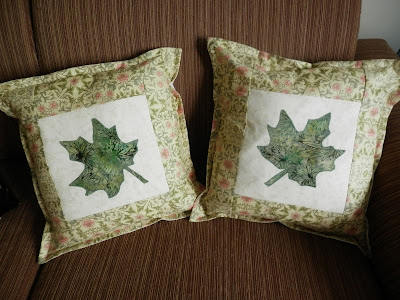 Two cushions for my daughter

No sooner had the cushions been completed that I had a bit of a panic attack.  The gift I had ordered for elder grand-daughter Emma hadn’t arrived, and we were due to meet up with my daughter Nicky for lunch, and exchange gifts as we were not getting together on the big day.  What to do?  Emma lives and breaths “horses” and the last time we had met up she told me that if I wanted to make her another oven cloth to replace her well used one (the girls do a lot of baking) she would really like a new one with horses on it.  So horses it was.

I beavered away in the sewing room cutting and stitching, getting her present done just in time to get it wrapped and delivered with the other family gifts.  This is what I came up with:  an apron and a matching strip pieced double handed oven cloth, both covered in horses. 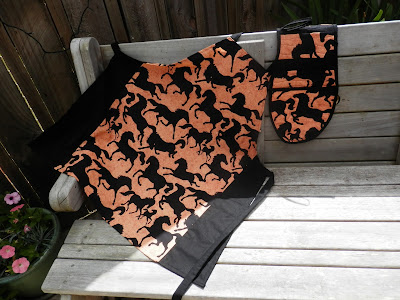 The apron was an easy make, but what a mess I got in making the oven cloth.  I used sacking (burlap) on the back, and as I cut it roughly to size, then trimmed it more neatly, bits of the sacking unravelled and got everywhere.  But at last it was completed, wrapped up, and duly delivered.

And wouldn’t you know it, the missing parcel arrived the very next day!  Never mind, I’ll tuck it away somewhere safe, and use it for the next birthday.

Well done to get the sewing in time. I have one bag, maybe an hour to do the fiddly bits, and then a table runner or place mats, have not decided yet. It looks like the Open Live Writer is going to be OK, until the other day, I could not load it, although the website said it was ready to go. I find it easy to use, and would probably suit you too, do all the post offline. Almost the same as Live Writer, but no spell check,( at least that is what I found the other day)

Your cushions are beautiful, Jenny, your daughter will be delighted.