With an appointment to keep in the Big City, we stopped off at Porirua for lunch.  But the real reason was to call into the wonderful shop that is Pete’s Emporium.  They sell all sorts of things, something for everyone really, from dress up items and wigs, to hardware, flags, and all sorts of interesting low priced items.  But the draw card for me was the amazing range of haberdashery, laces, trims, buttons, plus fabric too. 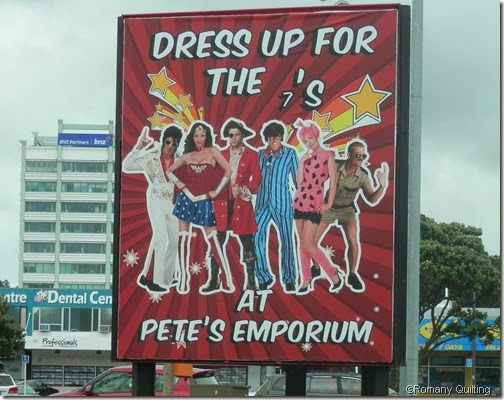 Robin was happy checking out all the blokey stuff, and I made my way to the haberdashery.  There were all sorts of interesting items in jars to look at, from bells, beads, and motifs, and all so very reasonably priced. 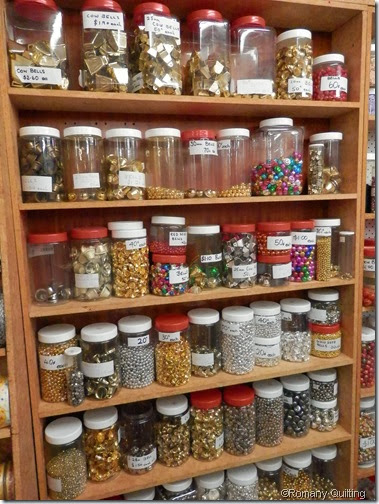 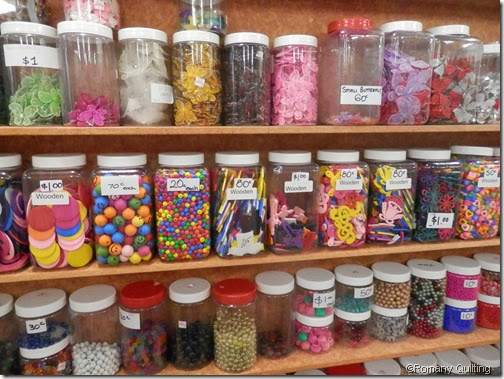 Jars and jars on interesting items

But it was the trims I had really come for.  There was lace, and fringing, elastics and ribbons.  Sparkly stuff glimmered and glistened under the lights, and I could have been there for hours, slowly going along the rows, inspecting it all.  But I’d really come in for something quite ordinary, some ric rac, and a few buttons.  Robin started hovering as I was getting served so I had to leave all these delights behind.  This is the sort of place to come without the husband, by yourself, or perhaps with a quilting buddy so that you have all the time in the world to check everything out. 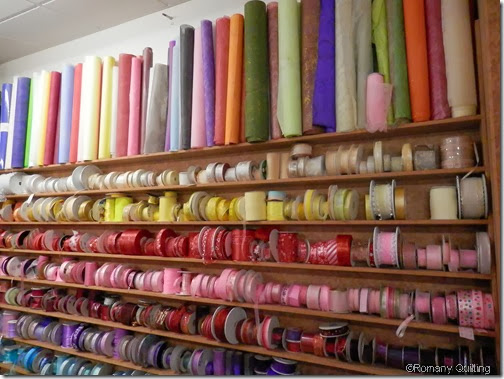 Ribbons of all colours

We planned to have an early lunch in the nearby North City Plaza Food Hall, before travelling on into Wellington.    The place was really crowded, it’s still the Christmas school holidays here so there were family groups everywhere.  The three older ladies servicing the large Food Hall were really earning their wages, clearing tables, wiping them down, stacking plates and cutlery, and tying up and removing rubbish bags.  They never stopped moving, but did their work quietly and efficiently.

After checking out what was on offer, we decided to eat Chinese, making our way around the buffet taking a bit of this, some of that, adding a few “crunchies”  to the top of our plates, such as tiny spring rolls, a wonton or two, and how about one of those delicious stuffed and battered mushrooms.  Sadly, our stuffed mushroom wasn’t a mushroom at all – instead we found a ball of rice with a few bits and pieces mixed it, then battered and fried.  But this disappointment soon vanished when I sipped my decadent cup of Hot Chocolate from Butlers Chocolate Cafe.  So rich and yummy, and I was invited to chose a chocolate (free of charge) to accompany my drink.   What luxury! 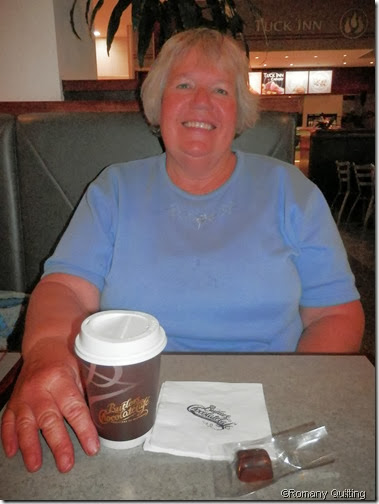 Travelling on to Wellington for my appointment with the Eye Specialist, I was put through a battery of tests, had bright lights shone in my eyes, and photographs taken of the retina.  While on holiday over the New Year, I had experienced flashing lights in one eye, and was quite concerned as I had previously suffered from a detached retina.  Luckily this recent incident seems to have righted itself, and no damage has been done.  Thank goodness for that, eyes are so precious, aren’t they.
Posted by Jenny at 11:12 PM

Pleased to read your eyes were fine.. We do have to look after them..
WOW Pete's is like an Aladdins Cave... Sew many lovelies in there.