At long last, I’ve finished another long drawn out project - my first attempt at smocking.   Actually, I completed the smocking several years ago, and have only got around to sewing it all together.  This dates back to those dark days when I was diagnosed with cancer, and had to stay in hospital for two weeks while hooked up to a chemo pump.  The oncologist told me that I wouldn’t feel too bad at all, and I wouldn’t lose my hair.  There was no need for me to stay in bed all day, and I was advised to bring day clothes in.  That sounded promising, I thought, so decided on what hand sewing project to take with me.  The back and front pieces of my pretty voile night-gown had been drawn up and was all ready for smocking, so I took that along to work on.

Life in the Cancer Ward was very sobering, and some people were very ill indeed.  At least I had the option of getting dressed each morning, and taking my chemo pump (on wheels) for a walk while I went down into the Day Room for a little stitching.  The nurses were quite interested in what I was doing, and most of the older ones had smocked for their babies and children many years ago.

My night-gown was recently rediscovered, and the time felt right to finally complete it.  Just a matter of constructing the bodice, stitching the sleeves on, and sewing it all together.  And it was finally completed today, I’m happy to say. 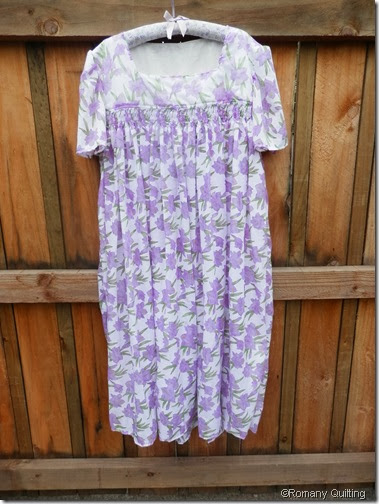 Long time in the making, my voile night-gown 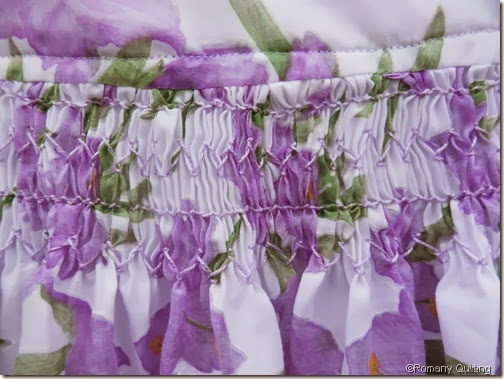 Not perfect, but finished

I had to take a break from sewing yesterday while Muffy was snoozing on the chair by my machine.  After all – I can’t disturb the cat!  She had just been to the vets and had taken herself away for some “time out”.  The poor old girl had suffered all sorts of indignities and was most put out, so I just let her be. 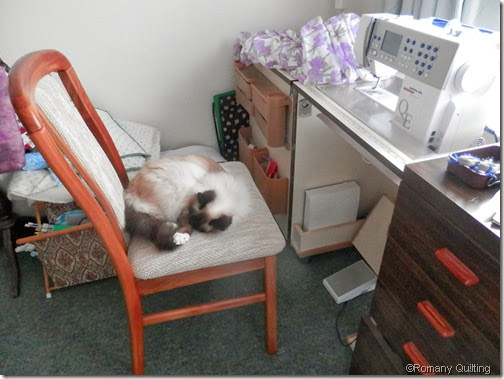 Now that my first attempt at smocking is finally completed, I don’t think I’ll be doing any more.  I’ve since discovered counter-change smocking, and that seems to suit my abilities (or lack of them) better.
Posted by Jenny at 5:03 PM

That is so pretty. I bet you are glad you finished it.

Thanks Linda. Yes, another very old UFO finally gets finished!

This is so pretty! I love purple so this is right up my alley. And Muffy... Oh my what a beauty! I looked at your blog header for several minutes.