I didn’t really know what to expect from the movie “The Railway Man”, starring Colin Firth and Nicole Kidman and based on the autobiography written by Eric Lomax.  The film starts softly, and shows the meeting of Eric and Patti as they share a compartment during a train ride.  They soon marry, but Eric is tormented by flashbacks of his prisoner of war treatment.  His unit was defending Singapore when the country fell, and the soldiers were sent to work on the construction of the Thai / Burma railway (the Death Railway) during the second World War.  Decades later, Lomax discovers that the Japanese interpreter he holds responsible for much of his treatment is still alive.   He goes back to confront his former enemy and see again the place where he was brutally tortured.

There is not a hint of the former Mr Darcy in this film.  I found it frightening and brutal, and spent most of the time trying to subdue sobs while wiping tears from my eyes.  Not a “feel good” movie, by any means, but I felt it told the story of this terrible time very well.

The film reminded me of that other hell-hole, Changi Prison in Singapore, where civilians were detained in atrocious conditions.  But out of this horror came the four Changi quilts, made block by block by the women prisoners out of whatever they could find.  Each woman was asked to put “something of herself” into the square, together with her signature.  The quilts were the idea of Mrs Ethel Mulvany. Supposedly made for the wounded in Changi hospitals, the quilts were actually meant to relieve boredom, to boost morale, and to pass information to other camps.

Prior to our trip to UK in 2008, I had found out that the British Red Cross in London holds one of the quilts, and arranged a private viewing with the Curator of Archives.  Sadly, it was kept down in the basement, and there wasn’t a lot of room around it with all the other things in storage.  But the quilt was beautiful, with heartfelt simple blocks, and I felt very honoured to have seen this wonderful piece of history. 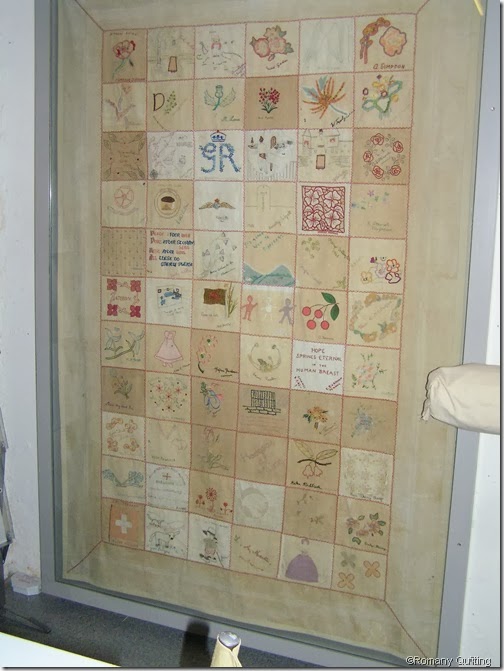 Changi Quilt in the London Red Cross Building
Posted by Jenny at 6:09 PM

A great honour Jenny, and a quilt to be admired, with many thoughts of those whose hands stitched their lives into a square. No harm in crying at a sad movie, I do it at home, and am sure would be the same when out. I'll take lots of hankies if I go to see it. Cheers to you both, Jean.

Thank you for showing us this photo of the Red Cross Changi quilt from London. Last June I was lucky enough to see the Girl Guide Group Changi coverlet on tour with the V&A Quilts 1700-1945 exhibition in Brisbane and some years ago we saw the two in the War Memorial in Canberra. They were on public display but kept in a glass case with very subdues lighting which was not good for photos. They certainly have a fascinating story behind them. Take care