It was my turn to host the Sew Wots today, a small friendship group which meet fortnightly.  Moving away from Upper Hutt last year meant that I had to leave behind the couple of quilting groups I met with regularly.  So I am very pleased that I was invited to join this small group of friendly ladies who took me under their wings.  Although I joined the local Town and Country Quilters Guild and enjoy the monthly meetings, it is so nice to belong to a smaller group as well.  Thanks so much ladies, I really appreciate your fellowship and getting to know you all. 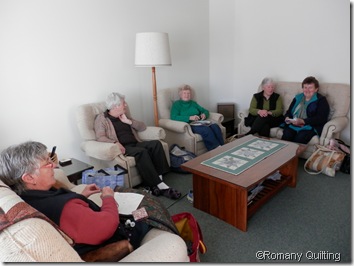 After having a “grand tour” of our new home, everyone settled down with their handwork as we chatted away.  Heather was stitching away on her hexagons, while Rae was working on her stitchery panel to be made into a cushion.  I got my knitting out, and Mary was working away on the prettiest little baby cribs.  She was crocheting around the base of the crib, which extends to a tiny draw string bag, so nice for little girls to carry around with them.  Inside the crib was a tiny little dolly, complete with a knitted dress, hat and panties.  I had never seen anything like it. 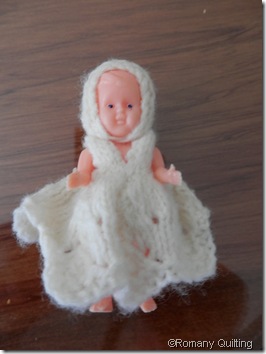 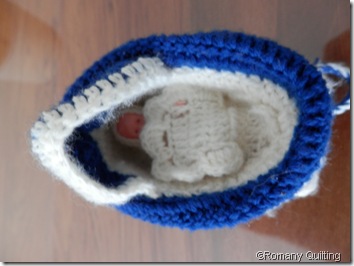 Fast asleep in the baby crib

Moira had finished her sashiko panels with the Maori inspired designs and is now turning them into a set of placemats.  These will be packaged and sent all the way to Nova Scotia for a Christmas gift. 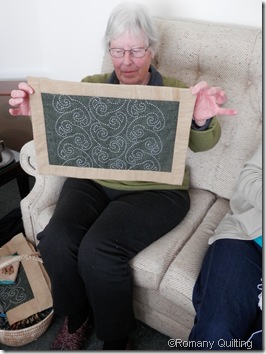 Place mat made by Moira

Some time ago the group took part in making a Row by Row quilt each, with Mary supplying the guidelines for each row.  These ideas could be open to interpretation, however the maker chose.  Two of the finished quilts were brought along today for Show and Tell.  It was interesting to see how they both turned out. 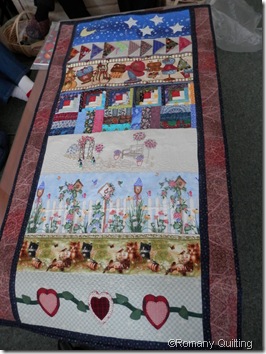 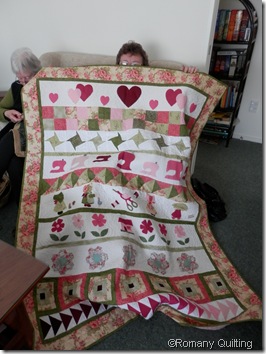 Mary hiding behind her Row by Row quilt

Our elderly cat Muffy spent the morning snuggled up on the couch beside Pam.  I commented that Pam should feel privileged, as Muffy decides whether or not she wants anything to do with visitors, depending on her mood, I think.  Pam does not have a cat anymore and really misses her pets, so it was nice that Muffy was happy to share the couch with her. 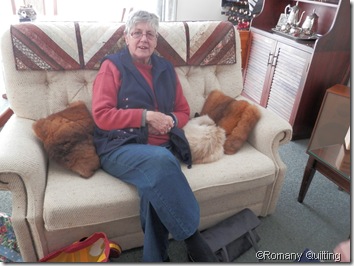 Muffy and her new friend Pam

Seeing other peoples work is always inspiring so when the Sew Wot ladies left I had a rummage around through a crate full of UFOs.  There are plenty there, and some I had forgotten about.  One only needs a border added, so I pulled that one out of the crate to think about.  I don’t think I’ll ever run out of something to sew!
Posted by Jenny at 4:44 PM

Jenny, a real treat to belong to such a group, and no need to lug those heavy machines, handwork that leaves silences to be filled with news and friendly chatter, did anyone find out how many days old they are??? Cheers from Jean

If readers are interested to find out "how many days old you are" check out our other blog on
www.romanyrambler.blogspot.co.nz

Jean (Nancy J)gave this fun link on her blog, and I "borrowed"it!