It was a step back to bygone colonial years when we visited the quaint little Golder Cottage in Upper Hutt.  This was built in 1876 by John Golder, home to his wife Jane and their 12 children.  Jane was the first white girl child born in Upper Hutt.  John added extra rooms to the cottage as the babies kept coming, and he also made much of the household furniture.  As we looked around the cottage, and climbed the very steep staircase to the two tiny upstairs bedrooms, we wondered where on earth the family of 14 all slept.  A lovely selection of hand stitched clothing was displayed in many of the rooms, such pin tucked and lace adorned garments are always a delight to see. 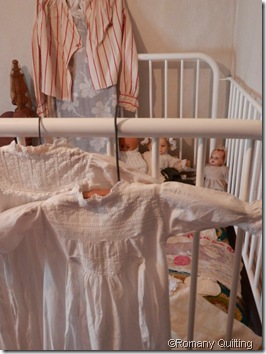 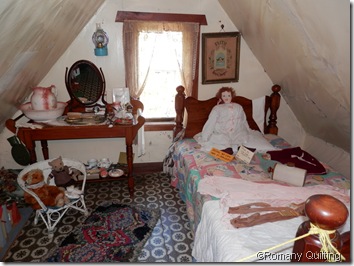 The very steep roof line in the upstairs bedrooms

Downstairs there was plenty of hand craft of the period to admire.  A sewing machine and a spinning wheel were set up just waiting for the busy lady of the house to start work.  There were several aprons stitched with glamorous designs. 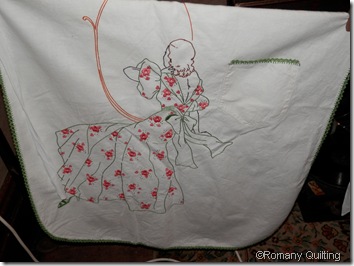 This hexagon patchwork quilt,  was stitched by a local lady using remnants of her sister's frocks. 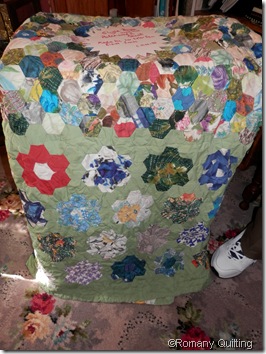 Quilt by Elyse Boyce of Upper Hutt made 1940s 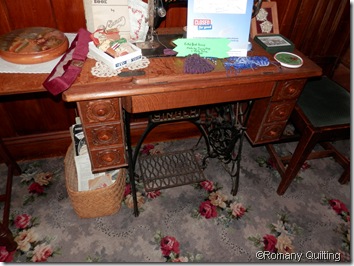 I learnt to sew on one of these 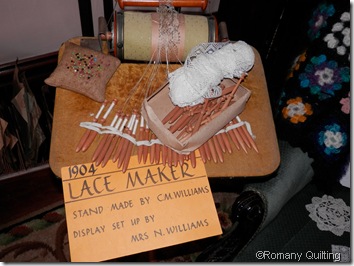 Display of hand made lace

Particularly poignant were the white crotched mantle banners with patriotic wording which were attached to two timber fireplace surrounds, and presumably date from WW1.  One banner said:  “God bless our soldiers in the trenches and our sailors on the seas.  God send them safely home”.  The other banner stated:  “Keep the home fires burning till the boys come home to Bonnie Scotland”. 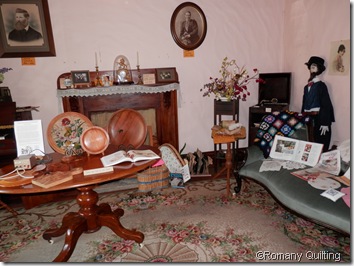 Sadly, John Golder was killed in 1902 when his horse bolted and the trap overturned.  Jane was left a widow with a very large family and there was no such thing as a Widow’s Pension to help out in those days.  Their eldest son Alexander never married, and helped with bringing up the family.  Jane Golder died in 1942, and the cottage stayed in the family for another 40 or so years when daughter Theresa Golder moved into a rest home at the grand old age of 92.  Ownership of the cottage was transferred to the Upper Hutt City Council to preserve it as part of the city’s heritage.  We enjoyed a very interesting morning seeing how the early settlers lived in colonial times. 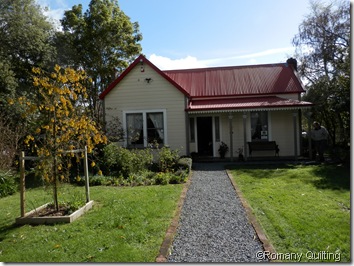 Jenny, I too learnt to sew on the old Singer, now I truly appreciate the lovely cabinet, remember that treadle that went in reverse all of its own. My Dad had a motor put on, as Mum did sewing for so many of the farmers' wives in our area. When she was given her first real electric Bernina in about 1952, it would have been like gold. I think Dad must have sold 2 cows and a bull to pay for it. Greetings from Jean

It was quite a soothing past-time treadling away when I was young. And then I remember how excited I was when I started using an electric sewing machine at Intermediate school sewing classes.