Sadly, too busy to Stitch

There hasn’t been much sewing happening here lately, I’m sad to say, I’ve been much too busy to stitch.  Instead, I seem to have been spending an awful lot of time in the kitchen.  I had some very special baking to do yesterday, when I baked a long awaited carrot cake with cream cheese icing for Robin’s birthday.  That certainly put a big smile on his face.  And I also prepared the fruit for a batch of of marmalade yesterday too.  So all in all, I seemed to be standing for hours, slaving away at the kitchen bench.  But all for a good cause.

We took a road trip to Palmy this morning to buy Robin’s birthday gift, a new Ryobi drill.  Plus a few bits and pieces for the back garden, a couple of shrubs, some weed mat and some bark chips to put on top and keep the weeds away.  Hopefully, the garden will get finished in the weekend.  Then in the afternoon I finished off my marmalade, after the chopped fruit had been soaking overnight.  I felt a bit like one of the witches in Macbeth as I stood over the boiling pan of fruit.  “Double,double toil and trouble; Fire burn and cauldron bubble.”

But the results were well worth the effort, as I ladled the golden marmalade into the jam jars, and listened to the satisfying “pops” as the jars started to seal tight.  Doesn’t it look nice?   Not bad for my first effort in the art of marmalade making, I feel. 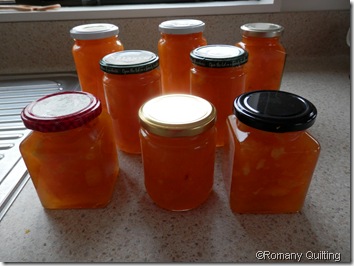 My first time making marmalade
Posted by Jenny at 8:07 PM

Love home made marmalade.
You can make it without soaking, but the shreds end up much firmer.

Lovely home made, so tasty. I too soak mine, but shred it in the Whizz!! A whole lot easier, when we have so much on the trees, I get it to the once boiled stage, then freeze to make into marmalade later. Greetings, and Happy Birthday to Robin, hope your day and cake went well, very well!!! Cheers from Jean.