Not quite a rugby quilt

Now that all the hoopla surrounding the Rugby World Cup is over life as we know it can get back to normal.  No doubt some quilters with mad keen rugby supporters in their households have whipped up a rugby themed quilt or two, as I’ve noticed rugby panels for sale in my local quilt shop.   Robin already has his own quilt with a slight rugby theme – although not quite a rugby quilt it has many memories attached.
For Robin’s 60th birthday several years ago,  I wanted to  make him something special. Some of his unwanted tee-shirts had interesting pictures so I decided to use them in a quilt, a sort of “this is your life” quilt. I used iron-on non stretch Vilene to back the knit fabric, and a black and white New Zealand silver fern print as the background. The quilt is backed with winceyette and is machine quilted. 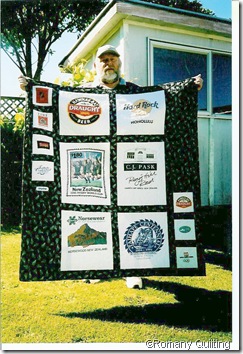 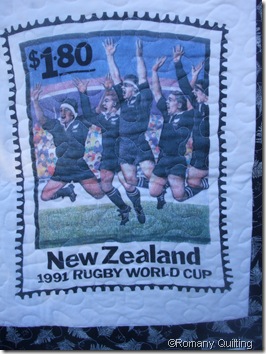 Rugby World Cup 1991 tee-shirt
Down the side borders are logos from former workplaces, New Zealand Post Office, New Zealand Fire Service, Cityline Buses  and Toops. Also included is a logo from Caravan Camping NZ, and one from a treasured and sadly worn out Rugby World Cup fine red wool jersey.  I named this quilt “Memories of Work and Play.”
Posted by Jenny at 10:21 AM

What a wonderful quilt full of memories!