With two English Royalists (quilters too) staying here for the weekend, I was busy planning my version of a Kiwi Royal Party.  My friend Kathryn was invited to boost the numbers, a bottle of bubbly was chilling, and an elegant supper was planned.  As luck would have it, I just happened to have a tiara and a feather boa to wear, and Kathryn brought along her hat too.  I found a couple of hats for the visitors to don, and we were ready.  What fun, the excitement was mounting as we settled down to watch the live TV broadcast. 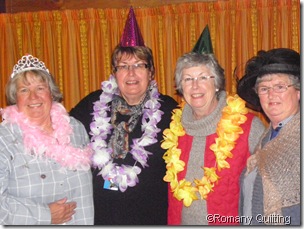 Robin was doing a bit of “Bah, humbug”, as I placed his Scottish hat on his head.  “I’m not sitting here all night with that on my head”, he declared. 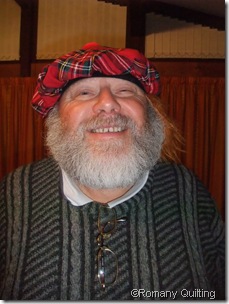 We sat patiently and watched as the TV presenters walked around the streets interviewing the general public.  Then the important people started arriving in Westminster Abbey.  Politicians, including our own Prime Minister John Key, together with other heads of state and various film stars and singers.  Oh, the waiting, perhaps we will start on our supper. 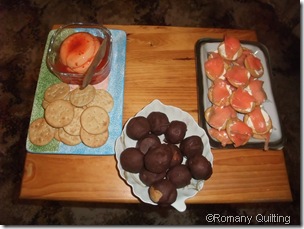 Finally the minor royals started to arrive, and we gave our opinion on their outfits.  Oh look, there’s William, doesn’t he look wonderful in that dashing uniform, we gushed to each other.  Then the moment we had been waiting for, when the bride started on her journey.  We watched the whole ceremony with  rapt attention and raised our glasses of bubbly to drink a toast to the young newlywed couple.  The royals ride back to the castle was a sight to behold.  Beautiful carriages pulled by well trained horses, and the mounted horse guards trotting along side, it was just magic.  No one does this sort of pageantry better than the British.  What a wonderful night we had.  Our cat Muffy decided it was all too much for her as we sat glued to the TV all evening and didn’t pay her any attention.  She sat firmly in the middle of the room and turned her back on us all! 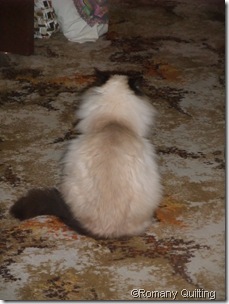 Muffy says, “I’ve had enough of this wedding business”

Looks like you all enjoyed the wedding. Oh except Muffy.

Sounds like you had a great night. I watched it all too and my hubby sat through most of it after saying he wasn't interested. He even watched the highlights again with me last night as he enjoyed watched the carriages and horses.

Sounds like such fun. Over here people had "teas" or "breakfasts" I didn't go to any, but when I got up with the kids at 6:30AM and turned on the TV, there was Queen Elizabeth in her yellow. My husband didn't understand the royal wedding fun at all. I can remember watching Diana get married when I was a child, so it was nice to watch this Royal Wedding too.