It was quite a different feeling for me at the Stitching Monday as for the first time ever I didn’t have to request a day’s leave from work. Oh no, for this one, and all the others to come, I am free to attend as a “retired worker”. What a great feeling. There was a nice friendly group in attendance. Some were still working on long term projects (as I was) but there were also several new and exciting works on the go. Pamela brought along her almost completed version of the Disappearing 9 Patch in black and white with lime green accents. With just the binding to stitch down she was almost there. Pamela has plans to make three black and white versions of the interesting quilt block, and was busy stitching blocks with red for her son. The final quilt in this mammoth task will be set with blue squares, what lucky children. 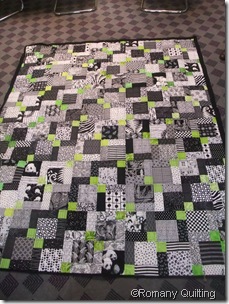 A touch of lime green also featured in the Block of the Month that Petronella is busy stitching with a group of friends. Called Lime Spritzer, the lime fabric and pattern for each month’s block is sent out over a period of nine months. Petronella’s version is so pretty with her choice of pink and purple fabrics used with the green. 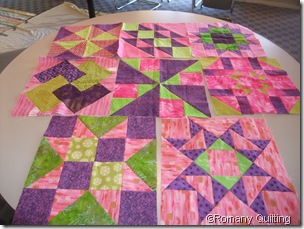 Maureen was working on small coasters for a craft fair. These certainly had a country look as they featured hexagons of pigs and cows appliquéd onto a coral fabric. Nicely finished with a black binding, they are sure to be a good seller at the craft fair. 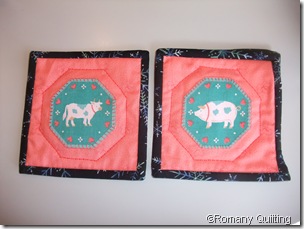 Now my own black and white quilt is all finished (and ready to be presented in the weekend), I took along another WIP. I am making blocks for a burgundy and cream quilt for my niece and laid them out on our bed in the weekend . Still not enough! So I cut some more strips and spent most of the day sewing extra blocks. I forgot to take my cutting board bag along, so many thanks to Joyce for lending me her tools so that I could trim up my blocks. I think my blocks are called Cobblestones, but I could be wrong. If anyone can correct me, please oblige. 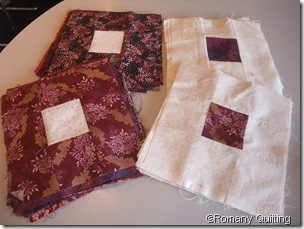 My burgundy and cream blocks

Sylvia loves hand appliqué, and also loves working with William Morris fabrics. Here she is with the last block for her latest quilt. Sixteen blocks this size will surround a large appliqué centre block. Sounds intriguing, and knowing Sylvia, it won’t be too long until we see it all assembled and ready for hand quilting. 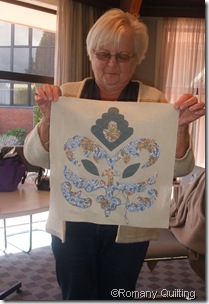 We all enjoyed another pleasant Stitching Monday working away, chatting, offering advice, drinking coffee. Thanks ladies, I always enjoy these stitching days.