There was a very big turn at the October Club Night to listen to former member Karen tell of her time spent in the Cayman Islands. Karen’s idea was that she would have all the time in the world when they relocated to get her UFOs under control, but as they say about the best laid plans….. The luggage did not arrive till several months later, and then her sewing machine blew up! When these problems had been sorted, Karen took on a teaching job, so those free hours had disappeared. She managed to achieve a little stitching, but life on the Caymans is fraught with worrying about the typhoon seasons, which lasts 6 months of the year. Cayman Islands are extremely low lying, and one’s possessions have to be secured and wrapped in plastic every time yet another typhoon warning is announced. In between work and dodging those extreme weather events, Karen and her husband enjoyed swimming, diving and underwater photography. Karen wowed us with a very professional slide show of life on the island and underseas. 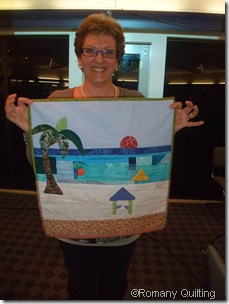 Show and Tell was great as usual, with many members bringing along quilts they had made for younger family members. The youngster in question is sure to love this bright “I Spy” quilt. 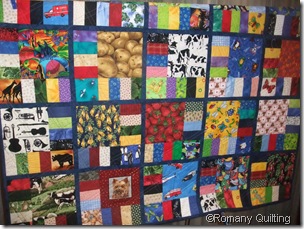 The recipient of this one is obviously a sports mad little boy. I think the quilters get just as much fun making kids quilts as the children do when they are given them. 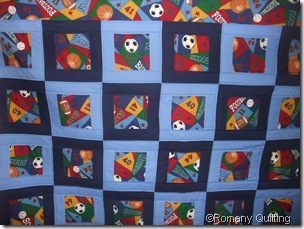 Sporty quilt for a young lad

Rose’s little ABC book had us all itching to come up later and have a really close look. It is full of photos of Rose and her family members, and is sure to be a treasured item for years to come. The pages are held together by a buttoned panel, such a clever idea. Ann brought along a blue and white quilt she was making for a friend, and it is just beautiful. I love the pieced blocks set off with appliqué, and Ann is well known for her wonderful stitching. She did say that she has had quite enough of blue fabric now! 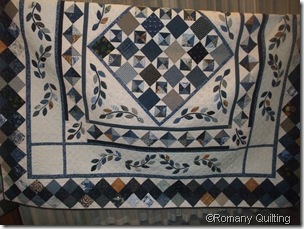 June brought along several quilts to show us from her girls at “Shut In Stitchers” at Arahata Prison where she teaches on Saturday mornings. These girls work with what ever donated fabric is available and proudly turn out some great quilts. Here are three of them, a strippy quilt, one made with a panel, and blue and peach pinwheels. 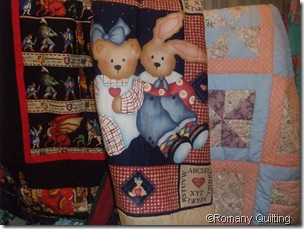 Quilts made by the Shut In Quilters

It was another great night, and I always go home with lots of quilty ideas buzzing around my head. No wonder I had trouble getting to sleep, so many ideas to think about.

Your group do some really beautiful quilts.