Black & White and a Splash of Lime

We had lots of family celebrations in the weekend, including the 25th Anniversary for my daughter Nicky and her husband Robert. I had been working away for some time on a black and white, with lime accents quilt for them. To be honest, I had finished most of the top some months earlier and it was sitting there just waiting for me to add the black border. Time was marching on, and there was a bit of a last minute rush. Julie Lister, of Coastal Quilting, did a marvellous job and I collected the quilt with a couple of weeks spare to complete the binding and label. As we were spending the weekend at Himatangi Motor Camp, it was just a just an hours drive to visit the family on their small farm at Kiwitea. Several new horses plus Henny Penny the chook had arrived since our last visit so of course we had to walk over the paddocks to admire them. Emma proudly led her very pretty filly Saffron out to meet us. 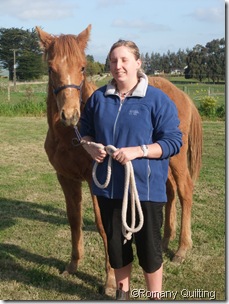 The working farm dogs were not terribly impressed with Emma’s new puppy Sasha, a foxie cross, who seems to be hyper active. A couple of nips from the big dogs soon put Sasha in her place, but her puppy brain soon forgot and she was rushing around all over the place again. 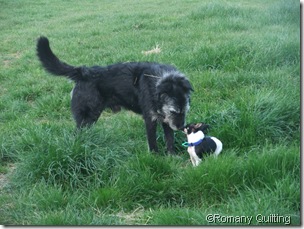 After our delicious birthday dinner we collected the quilt (hidden away in the car) to give to Nicky and Robert. They had no idea that the quilt was coming, so it was a nice surprise. Nicky has commented some time ago that I had made the grand-daughters three quilts each and she only had one! So now she is up to number two. 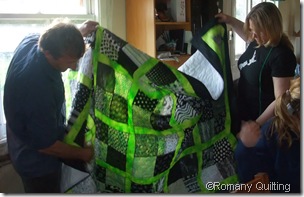 This quilt started with a collection of black and white squares that were swapped at the Southern Cross Quilters Retreat in Auckland way back in 2004. What to do with them? I decided to keep it simple and not to cut them up but to make dark/light 4 patch units and sash these together with lime green. It was soon apparent that my collection of squares would not be enough to make a queen sized quilt! No problem, I already had some nice black and whites in my stash and went shopping for others. To give even more variety, I asked my overseas quilting buddies if they could send me a few squares too. Quilters are generous people and always happy to oblige and I received a nice assortment from friends in England, USA, Australia., and not forgetting Canada. There are NZ and Aussie feature fabrics, spots, checks, stripes, cats, music, florals and goodness knows what else. 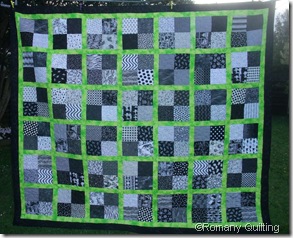 Black and White and a splash of Lime

The quilt had a life of it’s own and turned out quite large at 106 inches long by 90 inches wide. The photos do not show a true colour as the lime is much more yellow/green than is shown. 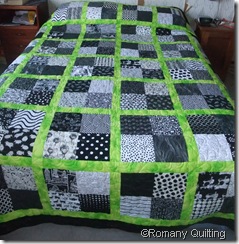 To all those Squilters who attended that long ago Retreat, thanks so much for swapping. And special thanks to my quilting pen friends who generously chopped bits off their own fabrics to send me. Now. that’s one UFO finished, which one shall I work on now?

So pleased you had a nice time visiting and the quilt is just gorgeous.

Gee is a big quilt too, well done it looks great, I really like the lime green.

Don't forget Canada! Some of those black and whites came from the great white north.

Sorry Gail, how could I have forgotten Canada! Have amended the list of participating countries now.