Golder Cottage is one of the earliest pioneer homes of Upper Hutt. It was built in 1876 by John Golder and he also made most of the furniture in the cottage. It is hard to imagine that this little home housed the growing family of John and Jane, and their twelve children. Some of the original shrubs and trees are still thriving in the garden, including a large kowhai tree growing in the front of the house which is estimated to be at least 100 years old. 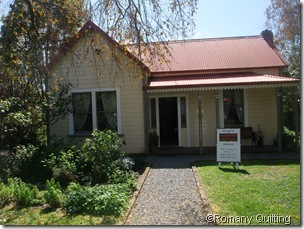 Golder Cottage with kowhai tree on the right

This historical cottage made a perfect setting for an exhibition of nine patch quilts. The dozen or so members of this friendship group decided to take part in a nine patch block swap, which started in June 2008. Each month the members were required to make two sets of 12 blocks, one set to keep and the other to swap. The swap was completed in May 2009 and by then everyone had 248 blocks to work with. Then the work began. It was decided to exhibit their quilts in 2010 to coincide with the Pinestream Quilters exhibition at Expressions Gallery. Two of the group were at the cottage to welcome visitors and tell about the different quilts. Here is Marion with her quilt, and a matching cushion. 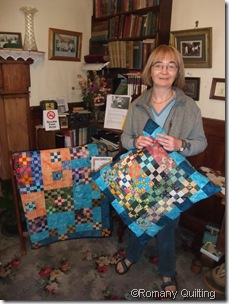 Marion with her quilt and cushion

Not everyone managed to get their quilt finished in time. Lee-Ann arranged her blocks on the vintage sewing machine in the cottage. This gave non-quilters an overview of the steps needed to assemble and complete each block. 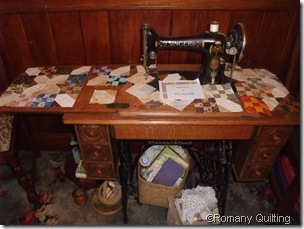 Even though the blocks were all the same, the different settings made each quilt quite different. Jenny’s use of alternate light and dark setting triangles gives a completely different look to the nine patch blocks. The two quilts on the couch were different again. Janet used deep pink in her quilt while Penny joined four of her nine patches together and used sashing and setting squares. 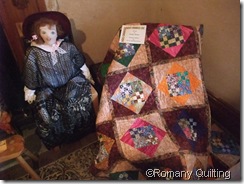 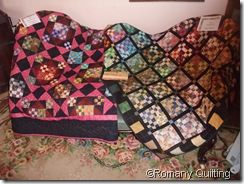 The same nine patches but all quite different results

As my middle aged legs carefully climbed the steep and narrow wooden stairs up to the two bedrooms, I imagined the children rushing up and down the stairs without any effort at all. Jean had scattered her nine patch blocks over the deep blue quilt on the bed. Ruth’s version was more structured. She had stitched many of her blocks together for the centre of her quilt, and used others to make a border, all set off nicely by the rich red fabric. Beautiful vintage nighties and underclothes were also displayed in the bedroom with it’s steeply pitched ceiling. You would certainly need to watch you didn’t bump your head on a ceiling like that! 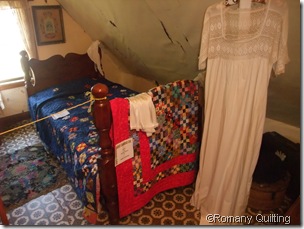 The humble nine patch it may be, but the results are stunning, and set off to perfection in such a lovely setting. Wonder what they will come up with next? 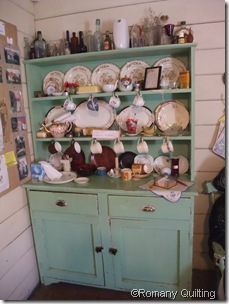 Kitchen dresser in the cottage

What a lovely display of nine patch quilts and what a superb setting for the show. Sometimes less is best and a simple design says it all. Happy stitching!