Getting Ready for Christmas

Christmas is coming up fast!  I’ve done all the food shopping, thank goodness, as I really don’t want to have to go out to the shops on Monday.  This morning I spent a little time in the kitchen making some Christmas goodies.

I’ve never done this recipe before for festive ice-cream, but it certainly is easy enough to do.  Made from whipped cream, a can of condensed milk,  several chopped  Crunchie bars and a generous dollop or two of Kahlua, a coffee-flavored liqueur from Mexico. it was quick to make.  (The recipe called for whisky but I didn’t fancy that). The mixture is residing in the freezer till Christmas Day.  I’ll be sure to let you know what it tastes like – if successful I imagine it will be rather like that Kiwi classic, Hokey Pokey Ice-cream. 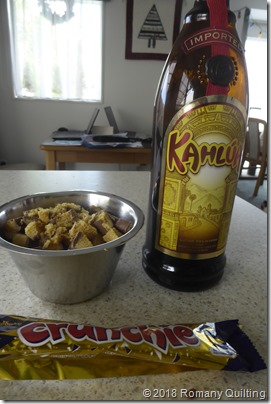 Then I made some Chocolate Truffles, another very easy recipe which I could make several days in advance, and they keep well in the fridge, as long as no one starts nibbling them.  These also have a couple of of slugs of Kahlua.  I’ll have to leave some of the Christmas food prep till Monday, so it is good to get a couple of things done early. 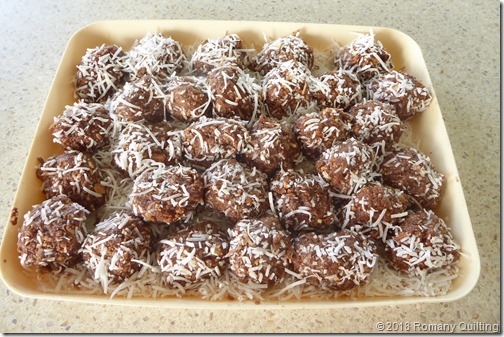 There’s just the smallest bit of hand stitching being done, in between the busy shopping and cooking.  This is where I’m up to on this small project. 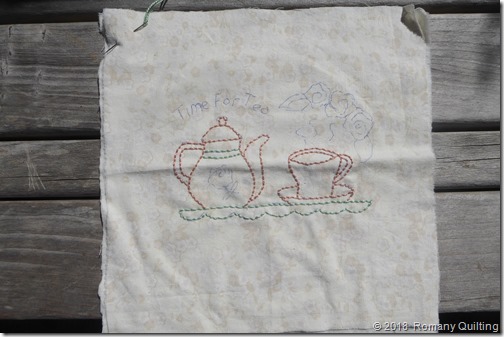 Working on my Time for Tea stitchery

Recently I read a quilting blog which showed their  Christmas wreath on the door.  My old wreath which I had made in a class many years ago finally broke and had to be replaced, so this is my new one.  Not actually on the door, but hanging above the window.  There’s a saying down this way that it is “Windy enough to blow the dog off the chain”.  We don’t have a dog, chained or otherwise, but the wind was strong enough to blow my wreath off the hook the other week! 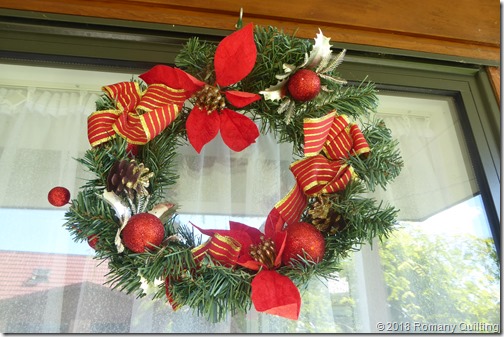 And I have a second, smaller wreath, which is quite special, as it was made for me by my daughter quite some years ago.  This one hangs outside too, beside the door. 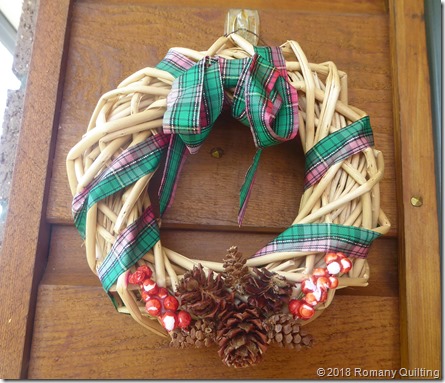 How are your Christmas Day plans coming?  I’m sure everything will fall into place on the day.
Posted by Jenny at 4:45 PM

Good to be organised for christmas . Both your special treats look delicious..
Nice to still have some time to relax and stitch..

Wishing you a Happy Christmas XX

That ice cream sounds rather tasty. It’s good that your are organised. I did the bulk of the food shopping today. We have neighbours coming over for drinks in about half an hour so that is all organised. Mick and I have a prawn, mango and avocado salad on Christmas Eve so I will have to duck in early on Monday to get the prawns. I even made Grandma’s pudding in a cloth a week ago. I haven’t done that in about 20 years. Other than that, all I have to do before the big day is wrap the last couple of gifts to pop under the tree. I think the next couple of days may be rather relaxing. I can’t quite believe it. I may even get a blog post of our decorations up. You’ve Inspired me to share our wreaths. Yours are great, and the hand made one is very special.

You sound very organised and well planned for Christmas.
Love the wreaths.
And the food sounds delicious.

It's nice to be on top of the Christmas preparations. Your ice cream and truffles look/sound delicious - would you consider sharing your recipes after the holidays.
Happy Christmas!

I used to make ice cream that was something like that - minus the spirits and if I remember right it turned out quite well. It is always nice to have special wreaths - I made one for my mom that came back to me after she died and I always use it and I have two that I made for me at the same time I made hers that I still use one above the fireplace and one on the front door. Merry Christmas to you

It would be hard not to nibble the treats you made. I'm going to my niece's house today once the roads are cleared of the snow that fell last night.

After a whirlwind trek through the grocery this morning fraught with racing shoppers, I am taking a respite!! ;000
All I have left is the wrapping of the gifts...
Your ice cream sounds fabulous...I may have to try it...will be watching to hear how it came out...
We will be traveling Christmas Eve day to my son's (about 2.5 hrs from here) and at home Christmas day just we two ;}}}}...
hugs and Happiest of holidays to you and yours, Julierose

Those treats look delicious. Nice to have a new wreath. We have that saying too lol! Merry Christmas to you and your family Jenny xx

Your Ice cream sure sounds like a tasty treat and your truffles remind me of the rum balls I made with friends years ago, truth to tell we ate more than we saved and none of us made it home that night choosing instead to sleep on floors, chairs and a sofa or two, oh the things we do when we are young. Love your Time for Tea stitched piece is looking sweet. Merry Christmas to you.