It doesn’t seem two weeks since I last met up with my Sew Wot buddies, but of course it is.  Heather B was playing hostess today, and she lives out in the country, and up a long rural road running up a hill.  I had collected Heather E and we drove up and up the road, until we came to a house at the end.  But it wasn’t Heather’s home, we had come too far, it seemed.  Oh dear, that’s what happens when there is too much chatting going on.  So we turned the car around, drove a little way down hill and stopped and asked a nice young farmer for directions.  Goodness knows what he thought, as we were practically outside the house in question!

It was lovely to catch up with everyone again, with just a couple of ladies away.  Everyone settled down to do a little handwork, or in my case, knitting for a change.   Pam brought along her  Row by Row quilt from a few years ago.  It was a bit of a mystery quilt, it seems, as clues were given for each row, with those taking part making their own interpretation of the words. 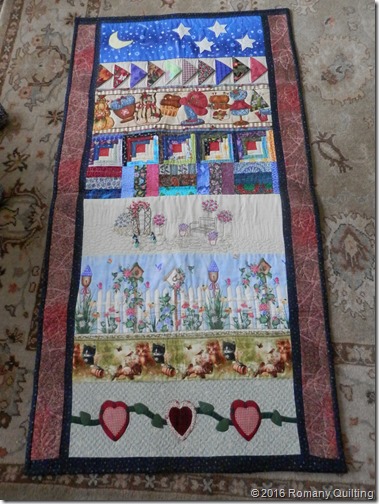 Helen was busy doing a little stitchery, which looked familiar to me.  It’s just like one I did and put on the cover of my quilt documentation folder.  The pretty little circular stitchery features a sewing machine, and is surrounded by a line of text.  Moira was busy hand piecing more blocks for her 1718 quilt. 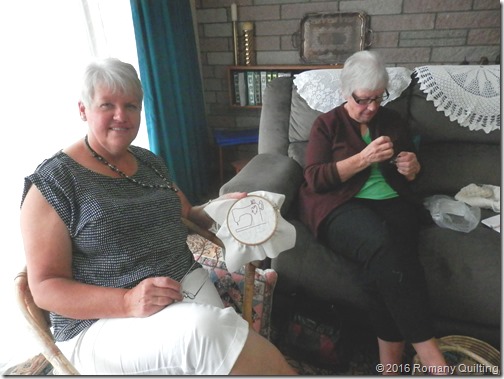 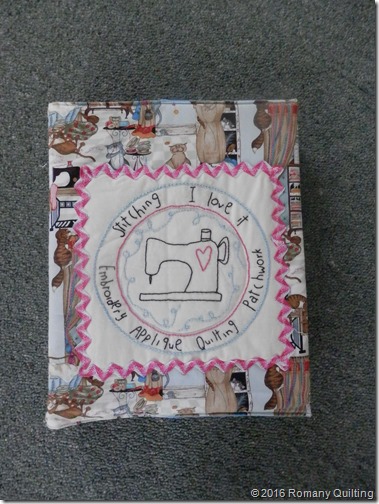 There was a little story behind the cushion Carol and Heather B are holding.  Carol stitched this lovely piece, made it into a wall-hanging and then gifted it to Heather.  Who later decided to change it into the pretty cushion is is today! 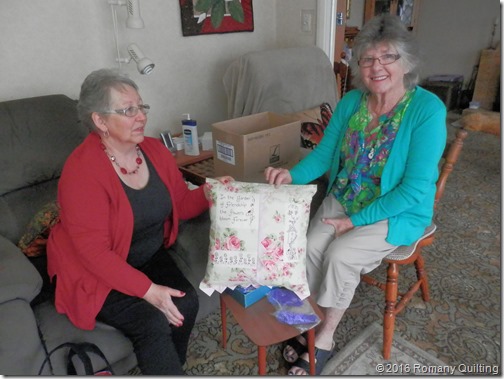 Carol and Heather B

Walther the cat wasn’t shy when all the Sew Wot ladies came to call, and curled up on the coffee table while we were out of the room enjoying our delicious morning tea.  He certainly earns his keep, we were told, and so far this year has caught and dispatched 24 rabbits, 2 stoats and 1 rat.  Good on you, pussy! 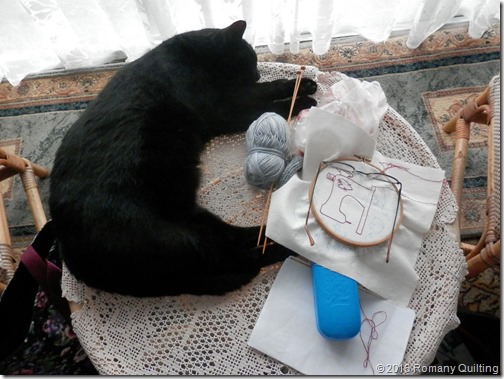 Gotta love that cat too!

It sounds like a great day, when you finally found the venue. You will know for next time now. Funnily enough I have stitched the same pattern as you and made it for the first ever swap I went in way back in 2009. It had to be a red work cushion. My recipient was Jenny from Elefantz, before she was well known. I was so worried about if my work was good enough. And what fabric to use. Looking back, I think it was OK. I blogged about it here. http://jannimary.blogspot.com.au/2009/04/warm-fuzzies.html

Lovely get-to-gether, and Walter is the best cat of all right there. great hunter, and wonderful company, ladies included!!!