At last my Santa has some nice new clothes to wear.  No more standing around in the “altogether” and looking sheepish, he really didn’t want anyone to see him like that.  With just his snowy white beard to keep the chills away he was really feeling the cold.  Finally he is respectably clothed, and ready to meet anyone who comes to call.  Santa started out a little flat, and looked like this. 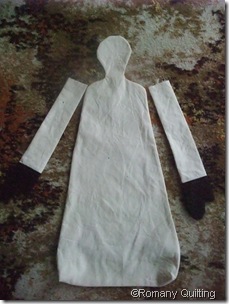 A large amount of stuffing filled him up nicely.  With his arms stitched on he looked almost human.  Pity about the legs though, he doesn’t have any.  I drew a couple of dots for eyes, and sewed his dainty little nose on.  With the addition of his beard, he was really starting to look like Santa.  Now, what about those clothes? 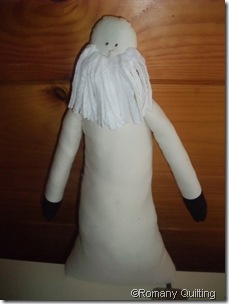 Once I finally started stitching the clothes, it didn’t take too long at all.  The burgundy check Santa gown covers his ample figure quite nicely, and the outfit is set off with matching hat finished with a tassel.  He certainly looks a whole lot more like a Santa should, doesn’t he?  This Santa was designed by Margaret Hart of Primitive Hearts and was published in Homespun magazine. 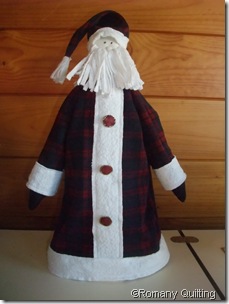 I must tell you that Santa has been threatened with grievous bodily harm!  I had him standing beside the fire just to show him off before he gets packed away till Christmas.  The man of the house said to me, “A couple of tennis balls would be handy.  Then I could knock that Santa over”.  How cruel is that!

Now now Robin I could do something else with those tennis balls!

I love your Santa - the new outfit gives his real personality. Happy stitching!

Boys! They are the same everywhere! (Girls too_ Following you I´m going to start thinking about Christmas!

Hi Jenny,
He looks a treat! How about sending us some pics and text to be considered for the Readers' Showcase pages of Homespun?
Deputy Editor, Homespun