Our speaker at the September meeting of Pinestream Quilters was the highest ranking woman in the Defence Force. Dr Anne Campbell, Brigadier (Rtd), told us of the trials and tribulations of starting an army career over 30 years ago. It was not easy to be a lone female in the male dominated defence forces. Becoming pregnant caused a uniform crisis, which Dr Campbell solved by having a loose fitting dress made in army green, modelled on one of her army shirts, complete with epaulets. This allowed for her expanding figure, as the months went by. Her work as a doctor took her all over the country, and more recently, to help with the medical issues after the various tsunamis that have ravaged so many countries over the last few years. We were fascinated to hear of all her adventures over the years, and she certainly paved the way for women in the services today. After retiring from the Defence Force, Dr Campbell is now health advisor at Veteran Affairs. Dr Campbell was introduced to patchwork and quilting during one of her postings, but admitted it was not really her thing at all. She did however, admire all the quilts brought along for show and tell. 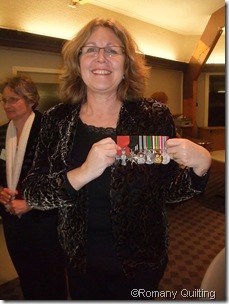 Dr Anne Campbell and her medals

Gaye brought along a lovely floral Kaffe Fassett design quilt, which every one oohed and aahed over. The colours were just lovely, so fresh and Spring like. 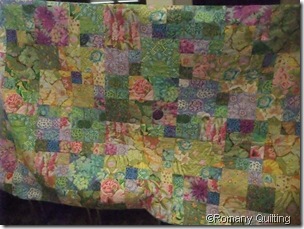 Brenda is our President, and showed us her paisley quilt in glorious bronze colours. Made in the “Turning 20” pattern, this is being sent away as a gift to her daughter and son-in-law. Seems that Brenda’s daughter has a bit of a passion for paisley designs. 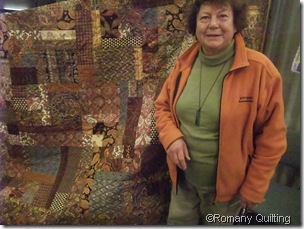 Brenda with her paisley quilt

Quilters are very generous and often make quilts for good causes. Sharon showed us her blue and brown Log Cabin quilt, which will be donated to the hospital. 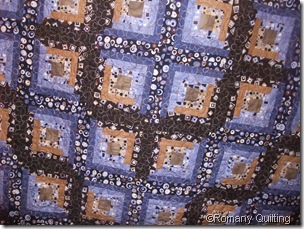 New Zealand fabrics were used in Rosemary’s quilt, which she had just completed for her husband’s birthday, and made in the ever popular Disappearing 9 Patch design. An excellent choice of fabrics as Rosemary’s husband is President of the Forest and Bird Society. 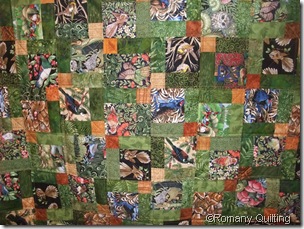 All in all, another great club night. Lots of quilts to look at, friends to chat to, a nice supper, and an excellent speaker.

Some lovely quilts and it sounds like you had a very interesting speaker at your meeting.