There are two quilts hanging in the Pinestream exhibition which celebrate different cultures. “Celebrating Diversity”, by Ruth Nicholas is made up of ethnic style fabrics and appliquéd figures of various colours, with the splashes of orange enlivening the browns. Ruth states that “each person brings special cultural values and benefits to the world”. 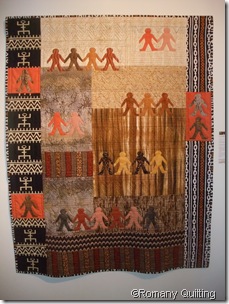 Maureen has made several African inspired quilts in her time, and this hand appliquéd quilt, titled “Under African Skies”, is a gift for her 13 year old great-nephew. With the sunset blazing in the sky, and the appliquéd motifs throughout the quilt, it is full of the rich colours of Africa. 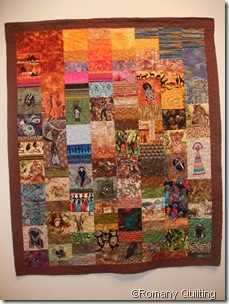 “Under African Skies”, by Maureen Adams

New Zealand is a land of diverse cultures as well, and what better way to show it off than the large traditional Maori carving in the foyer of Expressions gallery.The four faces on the carving represent the people in our community and their cultural diversity. The stones at the base have been gathered from the Hutt River, our local river which runs through the Hutt Valley and down to the sea at Petone. This carving is made from New Zealand Totara, weighs 1.3 tons and was carved by Dave Te Hira. 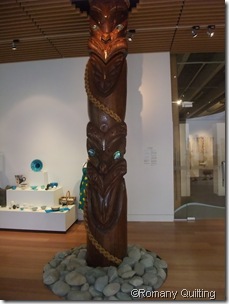