We were away at a caravan rally over the weekend, and since today is the 4th July, we had a special Independence Day quiz to complete. Now, as a Kiwi, I’m no expert on this subject, but I certainly knew the answers to these two questions.

Q: Who sewed the first American Flag? I know that, Betsy Ross of course.

Q: How many stars and stripes on the first American Flag? The answer of course is 13 stars and 13 stripes.

In June 1776, brave Betsy was a widow struggling to run her own upholstery business. Upholsterers in colonial America not only worked on furniture but did all manner of sewing work, which for some included making flags. According to Betsy, General Washington showed her a rough design of the flag that included a six-pointed star. Betsy, a standout with the scissors, demonstrated how to cut a five-pointed star in a single snip. Impressed, the committee entrusted Betsy with making the first flag.

Happy Independence Day to all those who celebrate this special day. 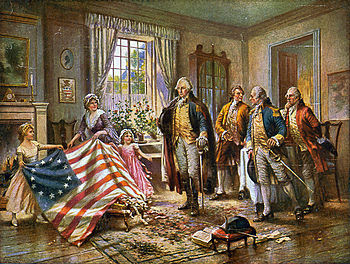 Thank you for recognizing our Independence Day. I'd venture to guess that you know more about the history of our flag than - sadly - do most Americans.