It’s great being on holiday, but it’s always so nice to come back home again.  Our cases are unpacked, and the laundry up to date.  And talking of laundry, while walking through the busy concourse of Central Station at Sydney, people were giving away packets of Colour Catchers to the commuters.  They will be handy to use when I wash new patchwork fabric purchases, especially batiks which can bleed in the wash. 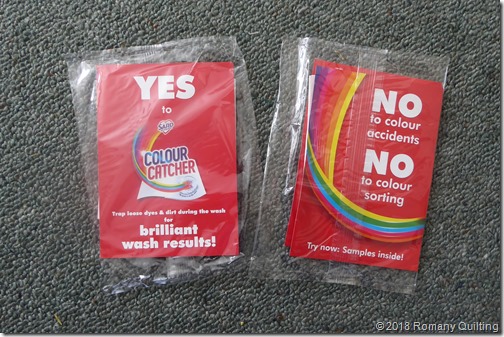 We went to collect our kitten Gemma from Yvonne, the breeder, who had been looking after her while we were away.  She was on the armchair with two other cats, looking quite at home, legs akimbo, as she busily got on with grooming duties.  We swear she has grown while we’ve been away. 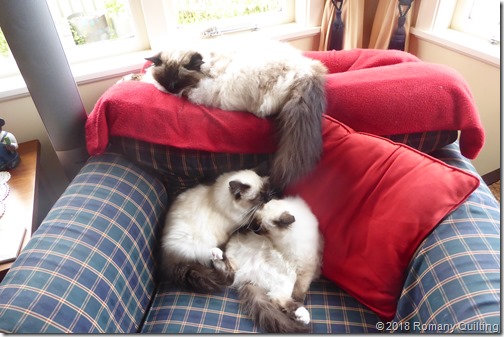 I bought her a little present from Sydney, a tiny soft toy, a kangaroo.  She has been patting it around the floor, and pouncing on it. 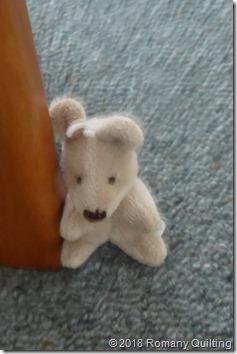 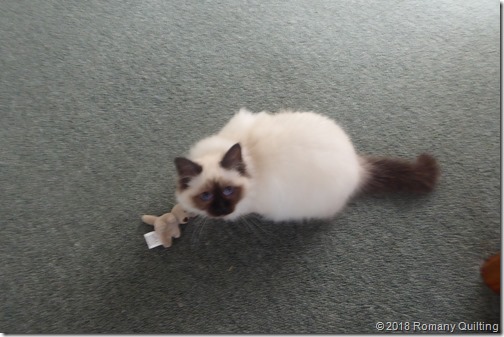 Gemma and her little kangaroo

I’ve decided not to “roll the dice” this week.  Instead, I want to work on my Aussie Adventure blocks.  Remember these from our earlier trip?  Hopefully, I’ll get them assembled into a top, that’s the plan. 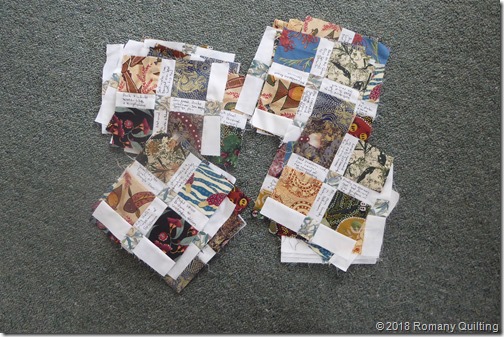 And I’ll pass on a conversation we had at Sydney Airport.  We were sitting down quietly when another couple, from Malaysia as we found out,  came and sat down on the chairs across from us.  They were about our age and the man said “You two look lovely”.  Lovely, I thought, what on earth was he talking about?  We admitted that we were a bit tired, after getting up quite early, and traipsing all around the airport.  He wanted to know how long we had been married, and informed us he and his wife were 10 years more than us.  After that unusual opening sentence, we had an interesting conversation about Singapore, Malaysia, the war years, and New Zealand, where his son now lives.
Posted by Jenny at 9:28 PM

that was an unusual opening to a conversation but always nice to pass the time in an airport chatting!
I use the color catchers all the time with quilting and they work, but if it is a big quilt I put in 3 of them and sometimes depending on color wash again

Loving your Adventure blocks...that sashing fabric is amazing with the fabrics...hugs, Julierose

I love Color Catchers! I use them when washing Quilts of Valor (red, white, and blue fabrics). Strangely, blue fabrics tend to bleed more than the red ones.

Gemma is a sweet bundle of fluff. I bet she's glad to have you home.

Colour catchers -what an interesting thing to be handing out and to a quilter who just happened by!
I remember those blocks and it is always interesting to see who will strike up conversations when out and about.

Home is always nicest. Your little kitty is very sweet. That was a very interesting intro into conversation lol! But seems it was very enjoyable. Looking forward to seeing your Aussie quilt take shape xx

Glad you are settled in back at home. Relax and enjoy.
Don't you meet interesting people when you travel!

How funny to be giving away colour catchers. We always carry them on holidays, as we’re more likely to do a load of mixed colours while travelling. They came into their own a couple of days ago. We find also, while travelling, that you meet the most interesting people and nearly everyone is friendly. It’s appropriate that you work on your Aussie quilt, seeing you have just visited again. I’m looking forward to seeing it progress.