It’s that time of year again when all the Christmas functions start coming thick and fast.  Instead of our usual Tuesday morning stitching day, we met for lunch  at the Emporium Café.  But before we got down to the serious business of eating, a few non Christmas gifts exchanged hands first.  Heather B presented Mary with the gift of a “Bessie Bag”, made to honour the memory of Mary’s Aunt Bessie who passed away recently.  Such a lovely kind thought and we all thought is was so pretty with the hand made doily on the flap. 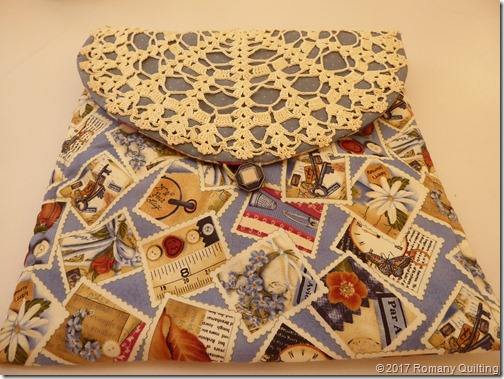 Bessie Bag made for Mary

As I was unable to attend several Sew Wot mornings in a row due to holidays and appointments,  I received a couple of belated birthday gifts, and took them home to open.   From Mary I received a pair of hand knitted thick wool slippers, they will be handy in the caravan, plus two fat quarters. 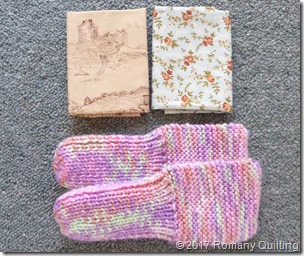 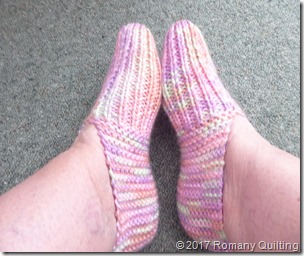 And Helen chose two vibrant fat quarters for me.  They go so nicely together and the floral one looks rather like an Impression painting to me.  Thank you both so much. 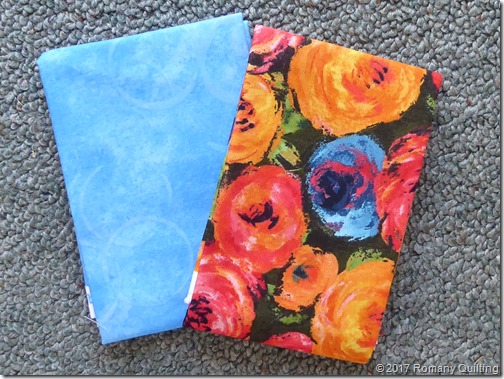 There was plenty of choices on the menu, from quiche, to pancakes, eggs benedict, and BLTs, all very tasty.  With a cool drink, coffee or tea, we were well satisfied.  I asked the owner if he would mind taking a photo of us all when he had a spare minute, and he kindly obliged.  Here we are, all dressed in our “glad rags”. 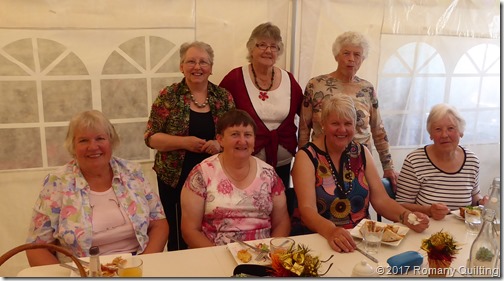 Back row: Carol, Heather B and Heather E
Seated:  Me (Jenny), Mary, Helen and Moira

Several months ago we were issued with a Christmas Challenge, to make a pair of “Mug Rugs”.  First I had to go online and find out what size a mug rug was.  Smaller than a place-mat, and bigger than a coaster – the criteria seemed to be that it should be big enough for both a mug and a small side plate for a biscuit or two.  Of course, I found pictures galore online with a huge variety of shapes and styles.  I made mine early as I was worried about running late as we had several trips planned.  We placed our wrapped parcels in the basket and each chose one after lunch. 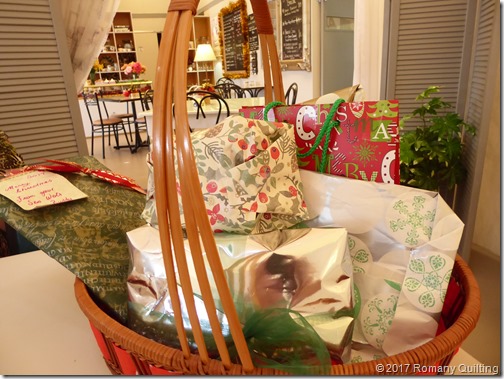 It was a lucky dip, and we took a parcel as the basket was passed around.  Oh – how exciting as we each unwrapped our parcels.  They were all gorgeous, made in such a variety of styles, designs and colours.  Some had a little extra gift enclosed too, such as a little packet of tea and coffee bags, and a hand made dish cloth, which was very generous. 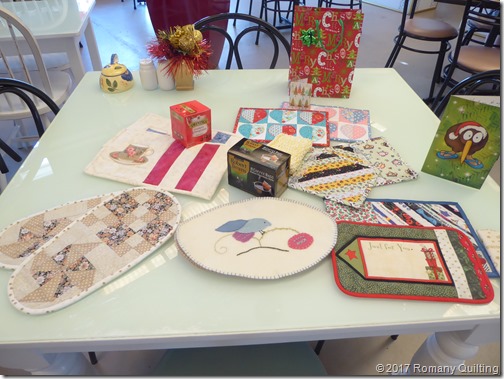 Such an assortment of mug rugs

I am so thrilled with my set, hand stitched on wool by Moira, featuring two pretty little birds.  Plus a box of  Twinings Cranberry and Pomegranate tea bags.  Sounds very tasty and exotic, especially as the box reads “Close your eyes, imagine yourself on a beautiful island and savour this flavoursome pairing.”  How’s that for a piece of descriptive writing!

We were then issued with our next challenge – to make something with a very large rubbery button before February when we start meeting again.  Goodness me – what on earth shall I do with this? 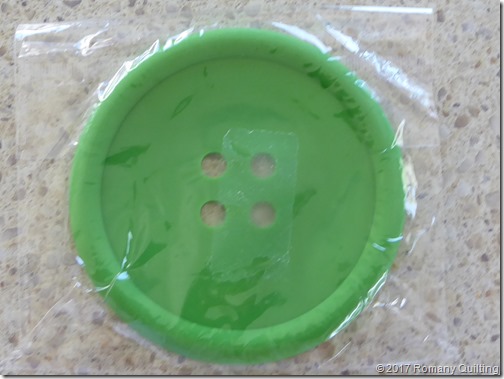 I have really enjoyed another year of friendship and get-togethers with the Sew Wot ladies.  And someone mentioned at lunch, the group has now been running for eleven years.  Long may it continue.

Looks like a wonderful outing, Jenny. I look forward to seeing what becomes of the large button. :)

Lucky dip gifts, what a great way to share, and you fat quarters, stunning together.

What a fun idea to have a challenge project for an exchange. The wool mats are lovely with the appliqué birds.

The button does present a challenge. I'm eager to see what everyone creates with it.

A lovely Christmas wind up with your Sew Wot friends... sew many lovely mug rugs were made and swapped.
Your hand appliquéd pair are great.
Handy pair of socks and nice FQs you received for your BD.

There was a lovely variety of mug rugs made. I love the ones you received. My goodness, what to do with the button? You will have to put your thinking cap on for that one.

Great outing with our sew wots, it seemed to go so quickly I guess thats because we all enjoy each others company, seems such a long time till we meet up again. Lovely mug rugs and food. Have a great down south Holiday Jenny and Robin and Im looking forward to the travel blogs. Happy Christmas and New Year. Heather B

Thank you all, for your nice comments. I do have an idea for my large button, but will have to give it a try to see if it works out!