It was great to attend our October club-night as I had missed the previous two months with our travels.  Our speaker for the evening was one of our own, Fay Davies.  Fay started her talk telling us she started sewing seriously as a teenager when she would whip up a dress for the Saturday night dances – I can relate to that, and did the same myself, all those years ago.  Quilting came some time later, after several years of sewing for children, and making curtains.

Fay is certainly one of those prolific quilters and showed us some of her lovely work.  I was amazed at the work going into these tiny blocks of the 365 Days Quilt, designed by Susan Claire.  Each little block is a work of art and the borders are made up of a series of different landscapes, such as hills, trees and mountains. 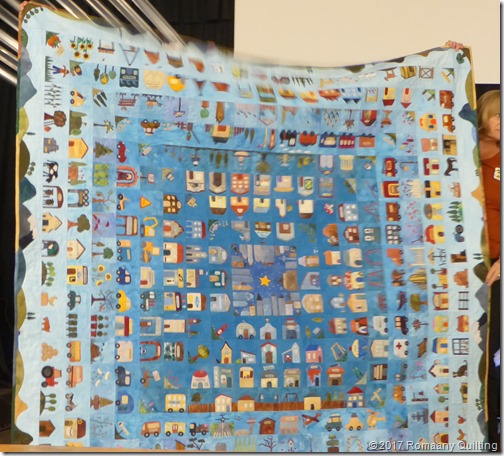 The striking navy and white star quilt was made for Fay’s grand-son for his 21st birthday.  And the Postage Stamp quilt, made of 1 1/2in squares took several years to stitch together.  I certainly couldn’t work in that tiny scale. 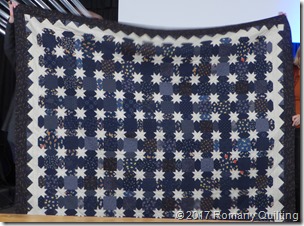 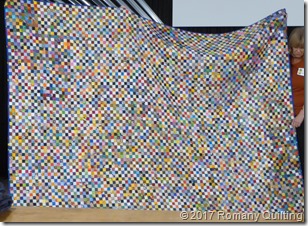 Kay is very much at home with all the features on her sewing machine and had brought along a huge pile of machine embroidered and embellished blocks which members were keen to check out. There was also a large quilt on show made from even more of these embroidered blocks. 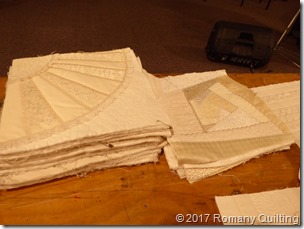 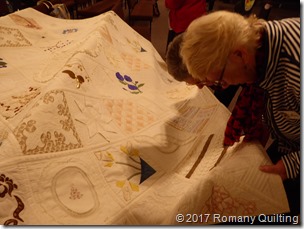 There was great interest in these machine embroidered blocks

Club members also brought along a little Show and Tell as well.  Sarah had been busy sewing as there were two family members expecting babies.  She had stitched a cot quilt for one of the expectant Mum’s featuring the family’s two cats.  And a cheery yellow changing mat for the other new arrival. 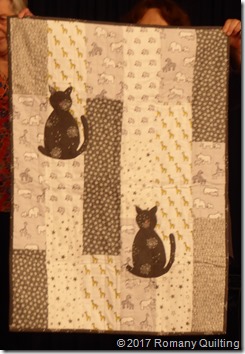 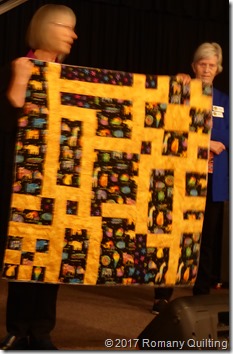 Made by Sarah – for two new babies in the family

And this lovely machine applique quilt made by Frances is hanging over my own candlewick quilt Raspberry Ripple which I was happy to show off at our club-night. 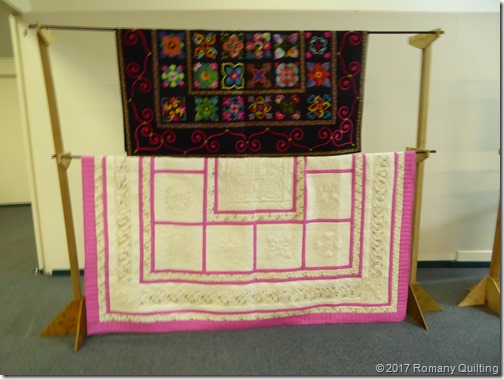 Applique quilt made by Frances, and my own Raspberry Ripple

We adjourned to the Supper Room for a cuppa, to check out the library books, and the raffles were drawn.  No luck again for me, I’m sorry to say, but two lucky ladies got to take home an interesting wrapped parcel each.
Posted by Jenny at 4:41 PM

It sis always nice to see what others are up to. Kay is very talented and obviously has lots of patience.

Club member Kay does beautiful work an brought along dozens of quilts - but of course I could only show a few of them here. They all were lovely in their own way, and covered may different styles.

Up to date on your posts now, Jenny.
Loved seeing Moira's fox! Such a great idea to cut apart a panel and then construct again with smashing.
Beautiful quilts and your Raspberry quilt shines!