Catching up on the Mending

After the frustration of not being able to deal with making the Rustic Reindeer pattern, and tossing it in the rubbish bin, I decided that maybe I would be better doing a spot of mending.   You know what it’s like – mending is put on one side while more interesting sewing takes place.  And then when you actually get around to the mending, it really doesn’t take too long at all. So a pair of Robin’s jeans were mended, in double quick time.  Then a new pair of jeans of his were measured, the legs shortened, pinned, and quickly stitched around.  I drew the line at shortening two pair of “real” trousers purchased on our Aussie holiday though – these were done by the professionals.

Next job was to add a simple inside pocket with a button closure on the inside of my shaggy denim bag.  This bag with the long shoulder strap is so handy to take away on holidays, and the new pocket means I can put my phone, wallet or keys in the pocket, instead of rummaging around in the bottom of the bag trying to find them. 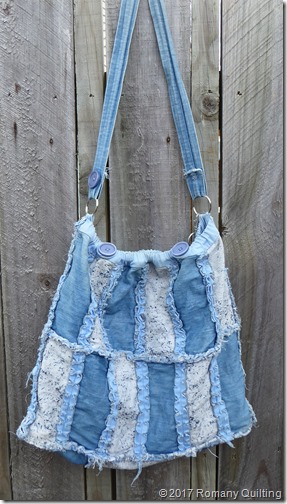 And finally I decided to stitch up a drawstring bag to keep our “Karcher Window Vac”  tidy.  We use this in the caravan to remove the moisture from the shower walls, and it had nowhere to live in-between times.  Much better to keep it and the power cord safely contained in the new bag, and I can now hang it on a hook in the bathroom. 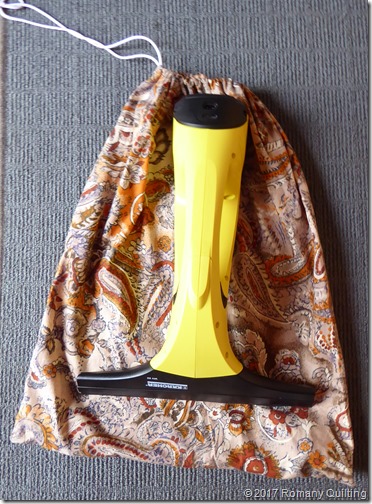 None of these small jobs took very long at all, and it certainly feels good to get them finished.

And with my birthday fast approaching, there are a few more gifts from the wonderful Sew Wot ladies.   Yes, I opened them early, just because I couldn’t wait!  Heather B gave me a pretty coffee mug decorated with cup-cakes, and some matching paper serviettes.  Plus a piece of “no-calorie” fabric covered with sweets, chocolates, licorice, and peppermint sticks. 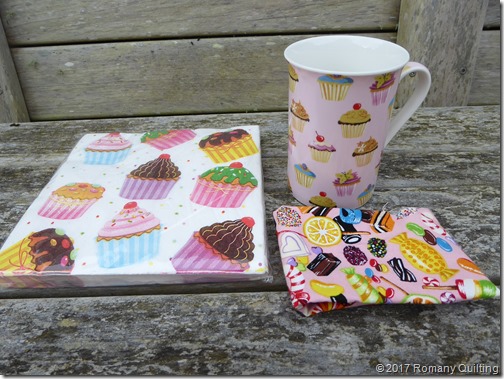 Moira popped around with a parcel too.  I received a plant pot and seeds to grow some Micro-Greens, little sprouts named Mizuna Red Gems.  Just the thing to cut and sprinkle on salads, egg sandwiches, and the like.  Plus a block of New Zealand’s own Whittaker’s chocolate – how delicious and yummy does “Nelson Pear and Manuka Honey Milk Chocolate” sound? 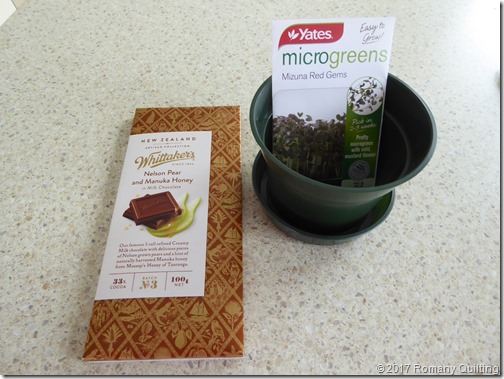 Monday is a public holiday here and we are having a triple Birthday Bash.  Both my grand-daughters and I celebrate our birthdays in a two week time frame, so it will be great to all get together for a family birthday lunch.  More about that later…….
Posted by Jenny at 2:56 PM

Getting all that done, and opening goodies early, a good start for the long weekend. Cloudy and quite windy here, after a day yesterday that was "Sunshine" all the way.

Well done Jenny. Sew good to get those annoying little jobs done...
Lovely birthday gifts from your friends.
Happy Birthday and have a wonderful time celebrating with your GDs..

Good on you for doing your mending. Would you like me to send mine over? Enjoy your long weekend.

Mending can be a satisfying job. You've received some lovely gifts. Enjoy the family celebration.

I have a pile of mending that I need to do as well. Perhaps, I will tackle that this weekend.

Your birthday surprises and gifts are delightful. Enjoy!

Very impressed to see all the little jobs getting done. There is a sense of satisfaction when they are completed.
Cheers, Karen
http://sunburntquilts.com.au/