Mystery in the Laundry Room

Goodness knows what happened.  It all started like this – when I did a load of washing in the motor camp laundry while we were staying at a motor camp in Rotorua.  I added the soap powder, put my three $1 coins in the slot and returned back to the van.  Being a considerate camper, I kept an eye on the clock, and popped back every so often to see how the wash cycle was going.  There is nothing more annoying to finding someone else’s washing in the machine, all washed and not collected.

This load is taking an awful long time, I thought to myself, as I went to check yet again.  I’ll give it another 10 minutes, then go back again.  Then success – the washing was finally done.  Now I’ll hang it out in the line to get dry.  But what’s this?  Someone has put a sweatshirt in my washing!  A closer look showed that none of it was mine.  It all belonged to another camper – but where was mine?  Not in the tubs, or on the table.  I couldn’t find it anywhere.

Then I noticed that the dryer was going.  Surely not?  I peeped inside to see my load of washing being tossed around in the drier, and it was nearly done.  Now – how did that happen?  Why would someone take my load out of the washing machine, put it in the drier, and pay $3 to do so? 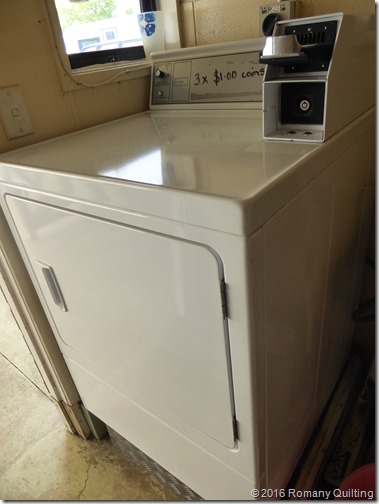 Who put my washing in the drier – and paid for it?

I wondered if someone’s husband had been sent over to the laundry with instructions to move their washing from the washing machine into the drier?  A mere husband wouldn’t be able to tell the difference between one lot of wet washing and another, I’m sure.  So I took my perfectly dried laundry back to the caravan, folded it all neatly, ready to put away.  And I never did find out what happened. 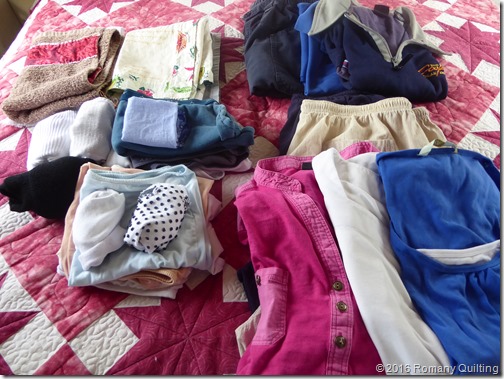 In between all this rushing around, I did some more stitching on my Christmas ABC blocks. Much more restful than trying to solve the mystery in the laundry room.
Posted by Jenny at 8:57 AM

Well, all I can say is that was one of those FREE bonus goodies. And it would have to be a man who didn't know his washing from yours!!!! Enjoy it all, cool wind here, showers on and off, a good day to hem some long summer pants and finish a bag.

Now that is a mystery. Just as well it was all OK to go in the dryer.