It was the final Town and Country Quilters stitching day of the year, and I was determined to get there!  But you know how it goes – things sometimes conspire against us and I had another meeting to attend in the morning.  So I squeezed both things in, attended the morning meeting, rushed back home for a quick lunch, and then I took myself down to the hall by 1.00pm.  Whew, life gets very busy, especially at this time of year with the pre-Christmas rush.

There were eight or so members working away on their various projects.  Ladies were pinning, or slicing fabric, a couple were pondering the next step on their work, and the sewing machines were whirring away.  I took along my very large horse quilt, with all the binding carefully pinned down.  My goodness, that quilt is heavy, and rather bulky, so it was just as well I had a nice large table to spread it out on, as I sat quietly stitching away.  By the time I had packed up at home time,  I was up to the last side – almost there now! 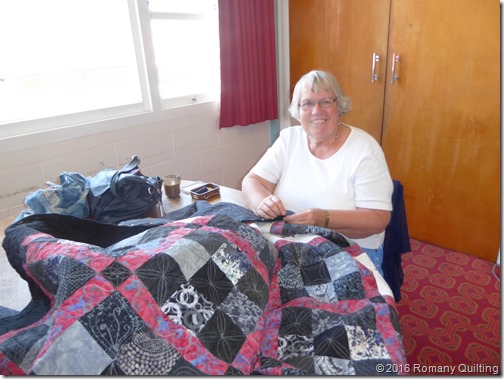 Ute had recently attended a club workshop on free motion quilting and was practising some of the designs shown by the teacher.  She was doing a great job, Ute’s quilting is wonderful. 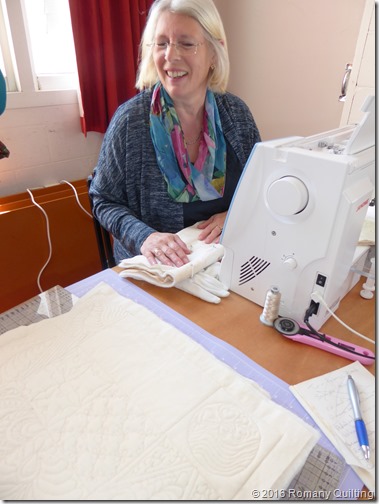 Ute with her free motion quilting

I think one of the secrets of free motion quilting could well be those quilting gloves.  I noticed that Lynne was also wearing them as she machine quilted her Pacifica quilt, using gold thread while making tiny little swirls, no less!  (I’m certainly not that clever.) 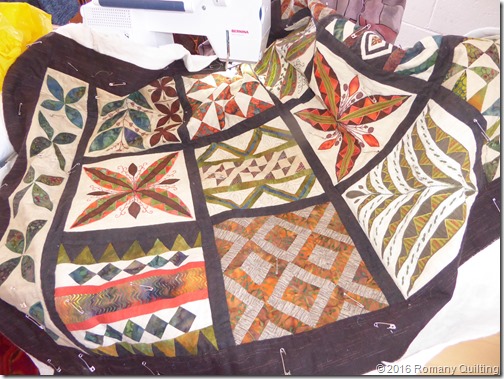 Another lovely design was Gill’s quilt colourful quilt top.  Made with an interesting pieced block with curves, I thought the floral applique border finished it off rather well. 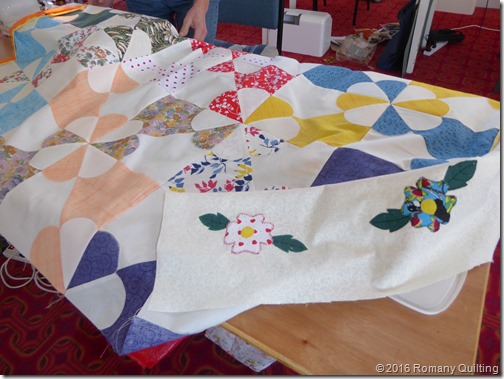 It was a lovely peaceful afternoon spent stitching in the company of other quilt club members.  Thanks for your company, ladies.
Posted by Jenny at 5:58 PM

I enjoyed the show & tell. Your quilt is beautiful, Jenny, and huge .... will be interesting to see how you gift wrap it. :)