A mighty earthquake shook us awake at midnight while we were tucked us in our bed. The bed shook, the house rattled, but luckily no damage was sustained in our home.  Although the quake was centred down in the South island, the effects were felt over a large part of the country.

Luckily, loss of life has been minimal, but there has been a lot of damage to the roads and rail system in the South Island.    All this damage will take quite some time to put right. 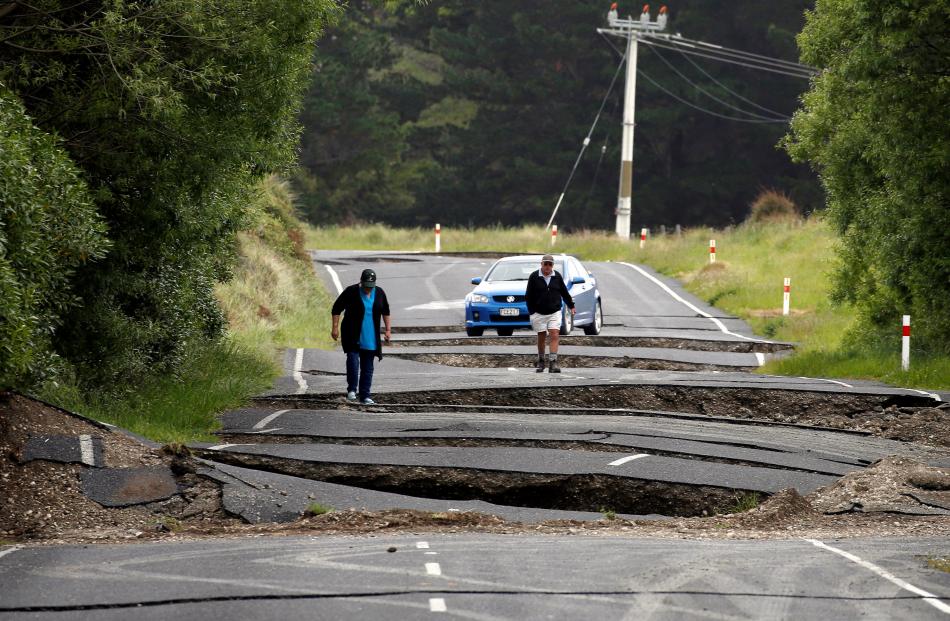 Now GeoNet has confirmed it was in fact a quake collision, and they say:  "Our reports indicate that the combination of these two quakes lasted two minutes, with the most severe shaking at around 50 seconds. It was widely felt throughout both the North and South Islands. It looks like one was a strike-slip and the other was a thrust fault."
Scary stuff indeed.  Our thoughts go out to all those who suffered damage to homes and property.
Posted by Jenny at 8:58 AM

I've been concerned about several quilters I know in New Zealand, you among them. Thanks so much for posting to let me know you're okay. It must certainly be a scary experience, especially when it happens in the dark, out of a sound sleep! Goodness. Do take care.

I remember the Chch quake in 2011 so vividly, but we didn't get any shaking up here. Monday morning was so different, maybe the way the 2 different quakes happened. We had side to side for about one minute, which was west to east, then a round and round, and up and down, for another minute. I, too, hope those down south can take comfort in the fact that so many of us care, and that help is being arranged as fast as the authorities can manage. I hope the weather holds for the NH190 helicopters to rescue those stranded at Kaikoura , and then take in supplies for those further inland. So glad you are home and all is OK. I see there is flooding a little way south of you, and we already have a lot of wind here.

Thanks to quilting friends who have expressed concern about the earthquake. It certainly was a big one, and it is the South Island which has suffered the brunt. The capitol city, Wellington, also has some damage to clean up, but it could have been a lot worse. Up here in our little part of paradise (Levin) we are relatively unscathed.

We are planning on a long weekend away in the caravan - some quiet stitching will settle my nerves!

So nice to know that you escaped damage, etc. from the quake - cannot imagine what it would be like to experience one.

Pleased all good with you but so sad to hear of the loss of life and so much damage.. sure is scary.

It is good to know that you, and all my friends in NZ, are safe after such a big quake. I am so glad it wasn't a repeat of ChCh. Enjoy some quiet stitching now.