Let’s get that Dice Rolling again

I’m a little late working on my “roll the dice” UFOs this week.  What with a three day weekend away in the caravan – that was fun, and great weather too.  Followed by a hospital appointment on Tuesday, him, not me, for a change, and goodness knows what happened to Wednesday.  It’s now Thursday, and I’m raring to go again – but not till I do the vacuuming, I told myself.  Do you make deals with yourself like that, I wonder?

Most of you know about my system to deal with all those UFOs by now.  I have numbered and listed six, roll the dice, and then work on (for that week) whatever number comes up.  And this week it is a new addition to my List of Six, my assortment of Christmas Stars and Nine patch blocks.  These were from two internet block swaps I took part in many years ago, run by Southern Cross Quilters. 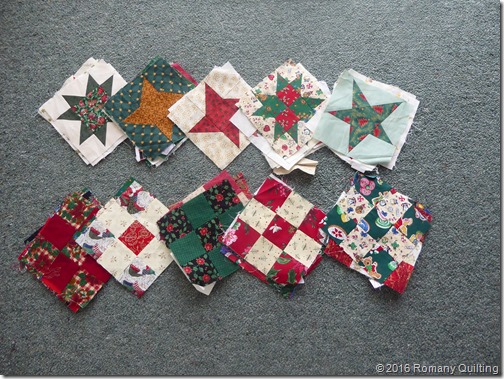 The criteria was to make 6 1/2 inch blocks in Christmas colours, red, green and cream.  But a bit of yellow and blue got sneaked in too, I noticed, along with a few in more country colourways.  The stars could be pieced or appliqued, it was our choice.  We stitched up the blocks in sets of 10, posted them off to the Swap Mistress, and received the same number back.  Goodness knows how long ago I took part in these two swaps, but the blocks have been waiting patiently for ages to be made into something.

I’ve laid them out to see how big it will end up, and discovered that I’m one nine patch short.  That didn’t take too long to whip up, with a few strips of suitable fabric from my box of bits. 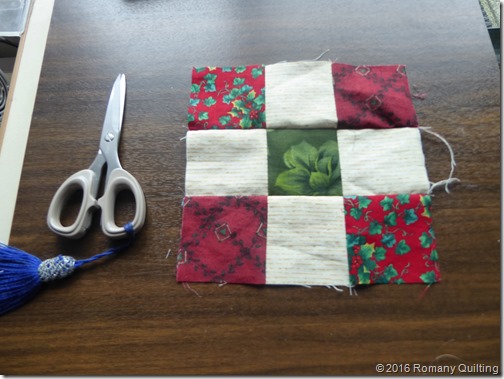 One more nine patch made

Guess I’ll be spending a bit of time arranging and rearranging all the blocks then I’ll start sewing the rows together.

It was my birthday in the weekend, and the postman continues to bring me cards, so nice to be remembered, isn’t it?  And a parcel from my pen-friend Rose who lives in Southampton, UK, containing several pieces of lovely fabric shimmering with gold thread.  Thanks so much Rose, I’ll have to find something special to make with this lovely selection. 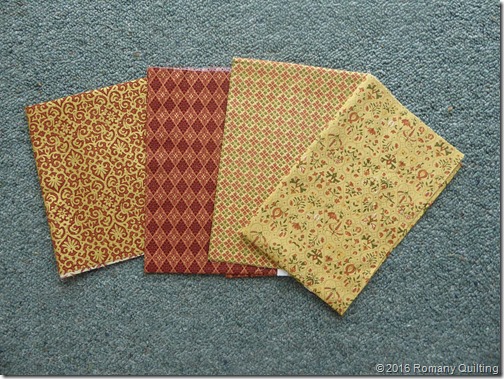 Birthday gift from Rose
Posted by Jenny at 4:01 PM

Have fun with this week's project. You may even have it finished for Christmas.....I won't say which year.

Nice to see you back into a routine again with your Rolling Of The Dice. I look forward to seeing what you do with these swap blocks. Birthday Greetings too, I hope you had a wonderful day!!

Yes, I absolutely make those deals with myself!!!

Happy Birthday Jenny and here I am with the questions again. What are pikelets? Sounds interesting. I love your Roll of the Dice and now a Christmas project added. Reminds me that I may have a Christmas UFO somewhere too...hmmm.

Many thanks eeryone for your birthday wishes another year older, but I can't complain. Jocelyn - pikelets are also known as drop scones, I believe. And I don't want to trump you (dare I use that term?) about Christmas UFOs, but I know I have several more Christmas ones tucked way. But I can only cope with 6 UFOs on my list at a time so I'm not even going to look for these other ones yet. Ignorance is bliss, in my case!