I’m on a bit of an apron roll this week.  Completing my Amanda Jean apron (UFO number 2) by Friday, and the prospect of a weekend at home, got me thinking.  Perhaps I could whip up another apron which was waiting in the wings, and hadn’t even made it to my UFO list?  So I did.

Like most of my projects, this one has a long history.  I made and swapped a whole lot of Signature blocks when I attended the annual Southern Cross Quilters Retreat in Auckland way back in 2004.  (SCQ were an internet quilt group, although most of the traffic seems to have changed to Facebook these days.)  We also had to provide a square of black and white fabric with each signature block we swapped.  My black and whites went into a quilt I made for my daughter’s 25th wedding anniversary.

I had already starting stitching a few of these blocks together, then put it away – seems to be the story of my life.  But they were reasonably big blocks at 6 1/2 square, so it didn’t take too long to assemble.  Although I had originally planned to line the apron, in the end I stitched green ric-rac over all the seam lines, which should hold it all together through repeated laundry cycles.  The neck band and ties were made from a New Zealand floral print. 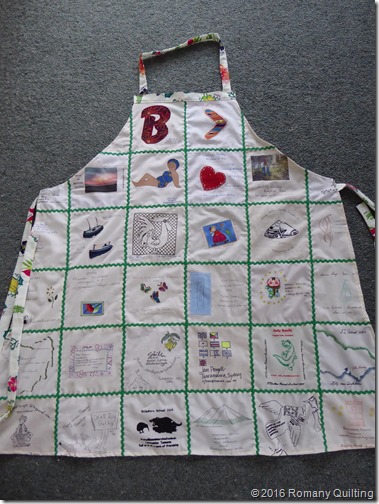 The signature blocks were a mixture of applique, embroidery, stamping, photo transfers, and free hand drawing, in all sorts of colours and styles.  There were a couple of maps showing where the swappers lived, two versions of Mt Egmont from Kiwi swappers, hearts, butterflies and the expired dog from Dead Dog Gully.  Such an interesting, eclectic mix which made me smile each time I looked at them. 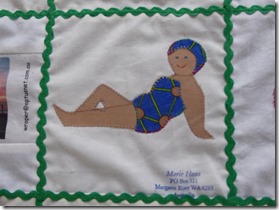 With the apron done, I still had a dozen blocks left over.  Then inspiration struck.  Stephanie had recently blogged about making some new kitchen tea towels.  I stitched 6 blocks together, adding a little of the NZ fabric as narrow borders, and backed it with some lovely soft cotton waffle cloth I had stashed away and didn’t know what to do with.  And the result is this. 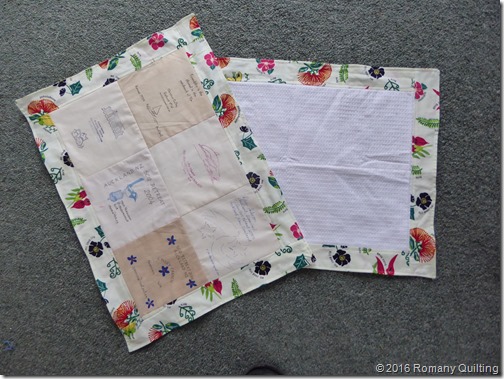 To be honest, I don’t really need more tea towels.  They are the sort of thing I tend to buy on our travels and there were so many in my cupboard that I gifted a lot to my daughter a while ago.  But it gave me the chance to finally use up all those signature blocks, and also the untold yards of green ric-rac, so that’s a good thing, I feel.
Posted by Jenny at 6:50 PM

Well done. A bonus project and one less UFO. It has turned out well.

Love this project. I would love to see each block and get a closer look at the New Zealand fabric, Jenny. But I know your time might not allow.

Golly, Peggy and I were at that retreat as merchants and we also taught some classes.

Using that ric rac for the seams was a brilliant idea. So were the dish towels. Thanks for sharing with Oh Scrap!

The whole idea of turning these into an apron would never have occurred to me. It's great!