It’s always such a nice surprise to expectantly come across a Quilt Show.  We are spending a couple of days with family in rural Kiwitea, and drove down into the town of Feilding.   Doesn’t that sign say “Quilt Show”?  How lucky was that!  The quilt show was put on by the Feilding Kowhai Quilters Club. 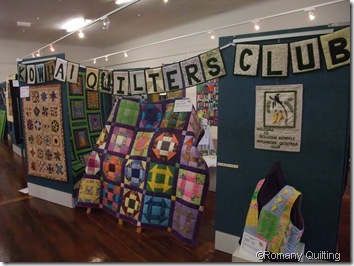 The Art Society rooms were filled with colour as all styles of quilts were hung and draped about the area.  The colours used in Joyce Waugh’s Trip Around the World quilt are very smart and contemporary looking. 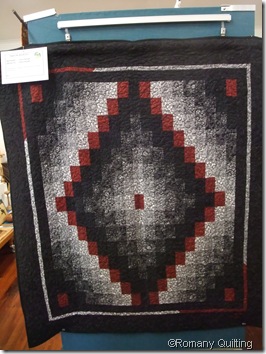 “Around the World”, by Joyce Waugh

There was an awful lot of work doing all the appliqué in “A Journey to Light”, a winter season story quilt featuring North American wildlife, including  wolves, bears, reindeer, and Father Christmas.  This was made by Pam Koat. 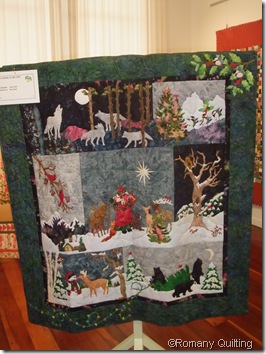 “A Journey to Light”, by Pam Koat

“Hide and Seek Bears’, is a Lil Blokes design stitched by Elizabeth Macdonald.  This lovely little child’s quilt was hung over a cot full of Neo-natal quilts stitched by club members to be donated to the Neo-natal Ward at Palmerston North Hospital. 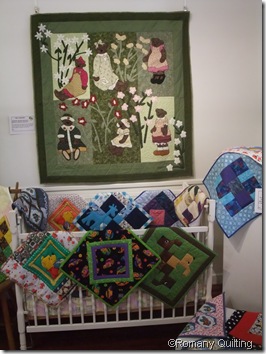 “Hide and Seek Bears”, by Elizabeth Macdonald, and Neo-natal quilts

I really liked the simplicity yet modern look of “15th Birthday Quilt”.  This was made by Rosalie Stead for her grand-daughter. 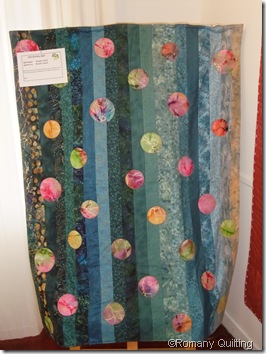 The Feilding Kowhai Quilters celebrated their 25th Anniversary last year, and some of the members stitched small blocks to commemorate the Silver Anniversary.  Each block had to be 25cm square and had to include some of the supplied kowhai fabric, and tell what the club meant to them. 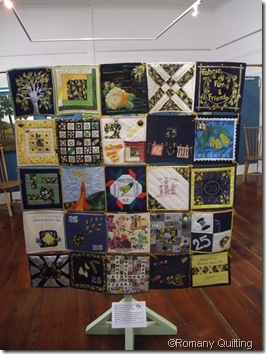 Liz Wakelin made this pretty 50th Anniversary cushion as a gift.  It’s full of lace, beading and ruffles. 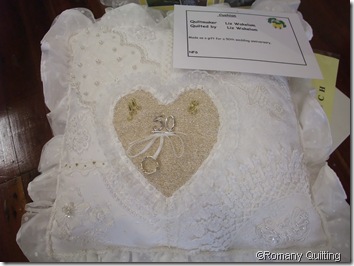 “Red Hot” just pulsed with life.  Mary Lloyd purchased the pattern and fabric as a kit from Cherry Pie quilt shop in Levin, and it all goes together beautifully. 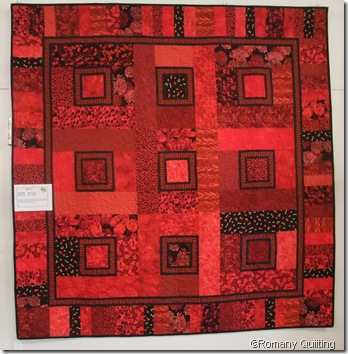 So that is just a taste of some of the quilts on display.  I really enjoyed this unexpected “quilt fix”.  Wonder if I will have any luck with the raffles?  I’ll keep my fingers crossed.
Posted by Jenny at 3:11 PM

How did I miss that Jenny? Did not see it advertised here at all. Kiwitea is a lovely place to visit or to live, such a friendly community. Cheers from Jean,

Thanks for sharing. My Aunt belongs to the club and last year when staying with her, my friend Annette and I went to one of their meetings.

So glad you enjoyed our little exhibition and many thanks for adding it to your blog. Regards, Mary Lloyd, Feilding Kowhai Quilters

Congratulations to all who organised the show, and had quilts hanging to view. I spent a most enjoyable morning having a good look around!