At last I’ve found a use for those black and white squares collected way back in 2004. I attended the Southern Cross Quilters Retreat in Auckland, and we all swapped fabric squares and signature blocks. After languishing in a bag all this time, I am finally putting them to good use. Of course, when I started on this current project, I found that I really didn’t have enough. My quilting pen friends kindly sent me some squares from their stash, and I went out and bought some extra black and whites as well. 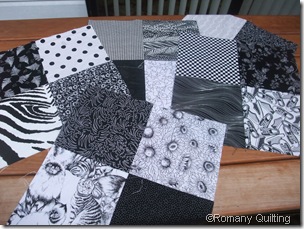 I’m keeping it simple, and have assembled lots of 4 patch blocks. This will be for my daughter and her hubby, who will be celebrating their 25th Anniversary later this year. To give it a bit of a zing, I’m using lime green as sashing. Will decide on the borders (or not) after the top is assembled. Although this would be classed as “secret sewing” as it is a gift, in this case I don’t need to worry about talking about it on the blog. My daughter home must be one of the few which does not have a home computer, and even if she did, I don’t think she would bother reading about her Mum’s sewing habits!

the lime green should really add a zing to the quilt. Love black and white quilts

Yes, it's starting to look quite good with the lime green. But wouldn't you know it, I've made it too long, will have to remove a row. I laid it out on the floor to assemble instead of on top of the bed.

What a wonderfully simple way to show off such stunning fabrics...I shall file away the idea for when I can bring myself to begin my B&W quilt!