That’s what the small ad in the local newspaper said – a collection of 100 handmade Santa's on show at the home of local couple Moira and Allen. So I collected my friend Adele and we went for a drive to see all these Santa's on display. After all, Christmas is coming up fast so a “Santa fix” will get us in the Christmas spirit. Just inside the door was a large decorated Christmas Tree. A couple of youngsters were enthralled as they watched the train circle around and around the base. Allen was chief train driver and and he seemed to be having just as much fun as the children. Moira told us that she had made most of the faces for her creations, using tin foil and clay. Each figure was exquisitely dressed and we were invited to pick them up and check out their clothing. The display covered three rooms and we wandered slowly around admiring each and every Santa. 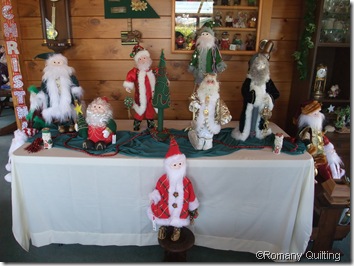 One of the many groupings

There was a delightful Nativity scene in the dining room, all dressed in hues of blue and purple. The three Kings were dressed luxuriously in shades of purple and gold. Mary and Joseph were more plainly dressed, and the shepherd was carrying a little black lamb. Moira told us that she had made the figure of baby Jesus herself from clay. 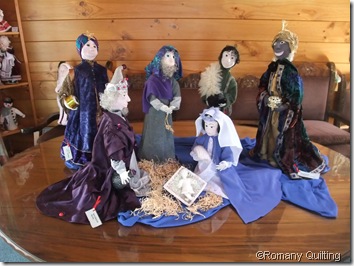 There were other figures too. We noticed Charlie Chaplin, Merlin the Magician, Genghis Khan, an Inuit Eskimo and a setting of carol singers. Christmas wreaths and wall hangings adorned the walls and there were Christmas cushions and stocking scattered around. We loved the snow white Polar Claus, whose outfit was made from their daughter’s wedding dress. Polar Claus rides astride his own polar bear. 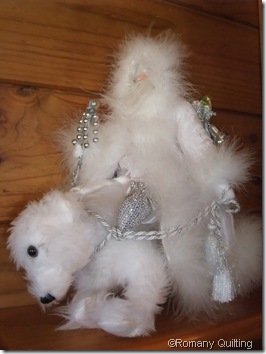 Polar Claus with his polar bear

There were Santa’s of every imaginable style, even a Surfboard Santa. All the items on display are lovingly made by hand and as a crafter myself, I can appreciate the time involved. Thank you Moira and Allen for so generously sharing the magic of Christmas. 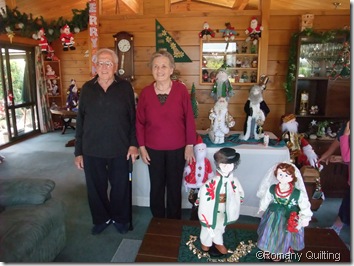 Love your blog! Amazing Santas. We have a fluffy cat but she has just been shorn for summer and lots of knots (14years old) She looks like an alien cat now!