It’s good to be back in the swing of Sew Wot (fortnightly) Tuesdays again, after missing the last one while we tripped here and there in the caravan.  Today Heather was our hostess, in her rural hillside property.  Two of the household’s three cats deigned to put in an appearance – sometimes they just can’t be bothered with visitors. 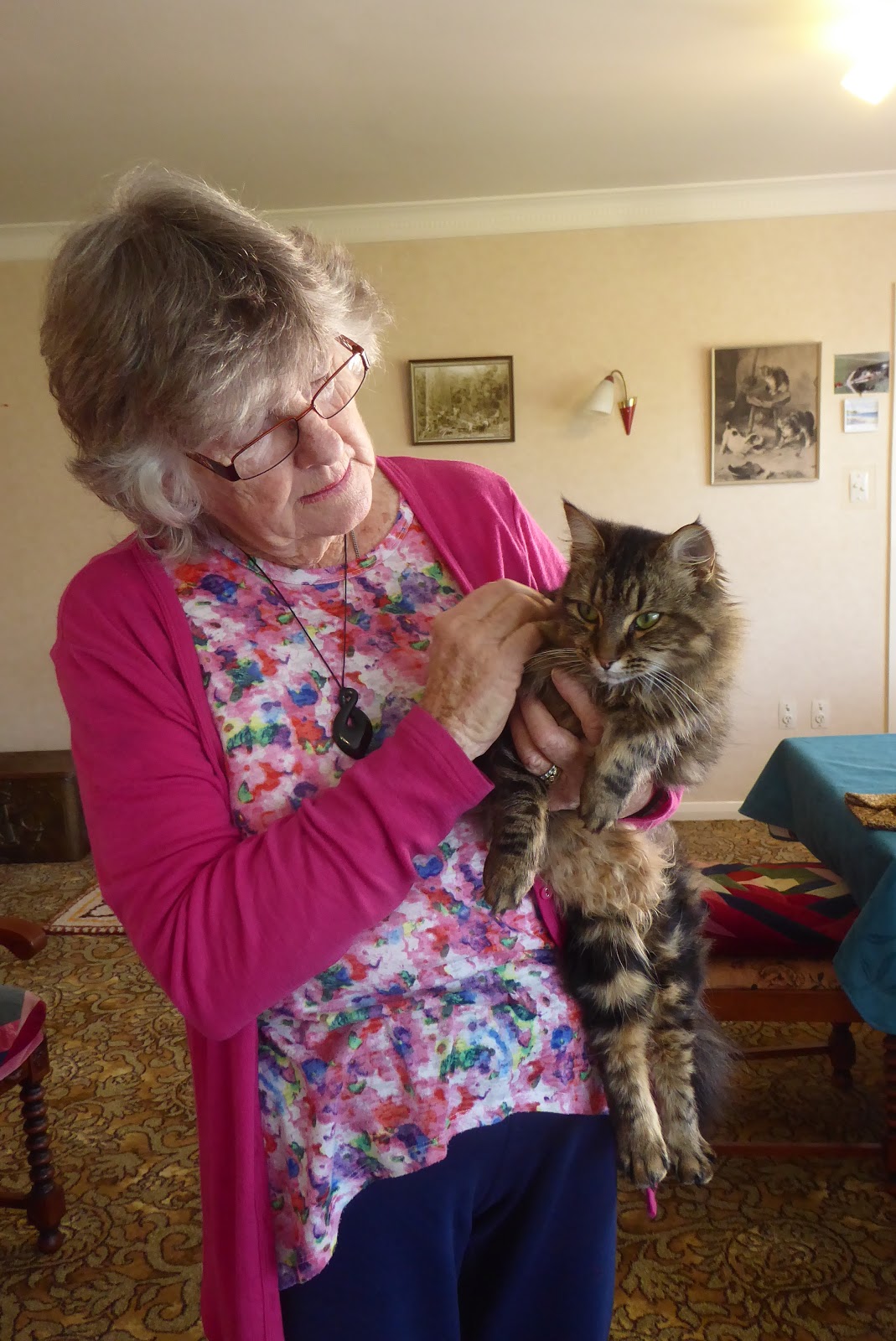 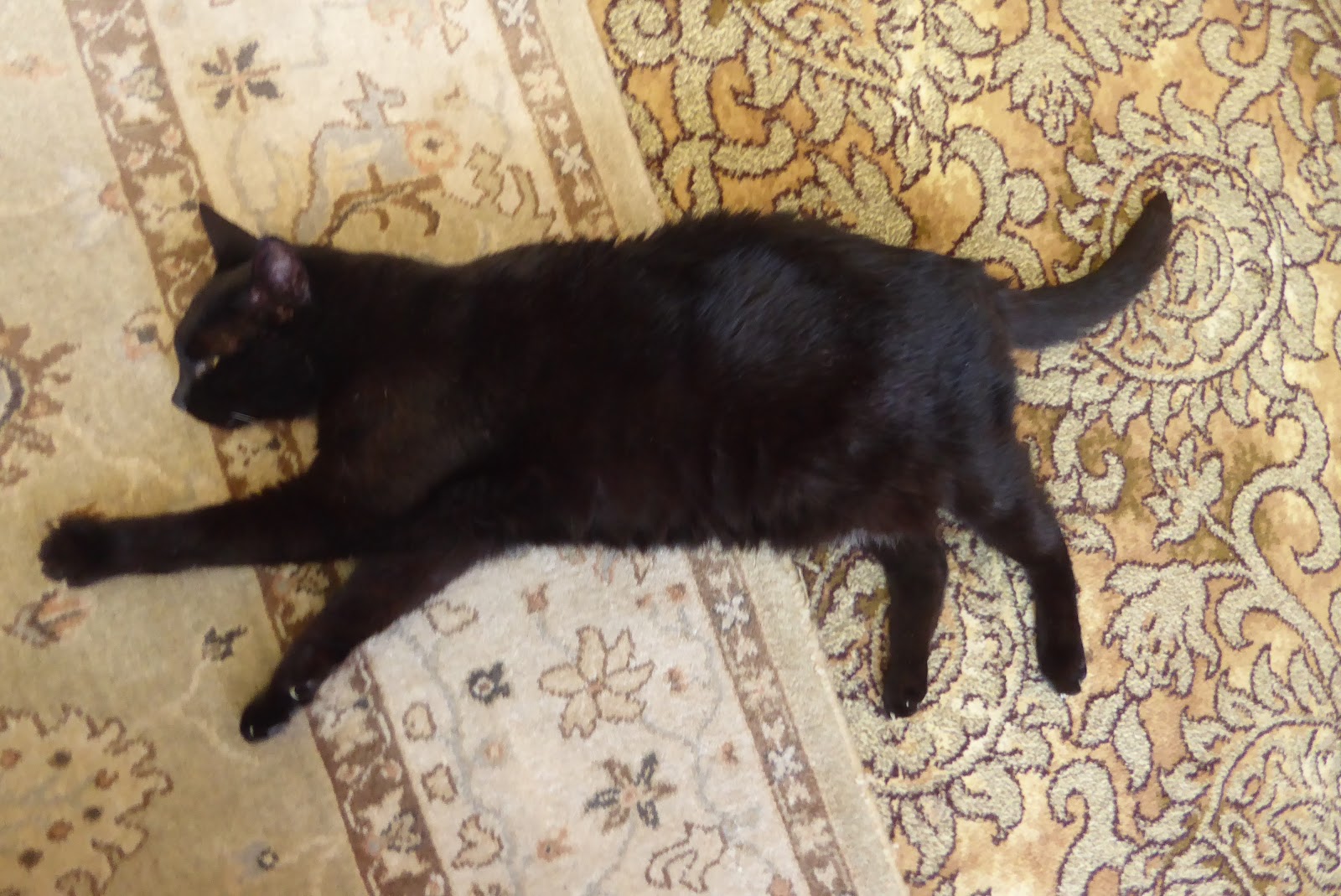 The old boy Walther stretching out

There was some show and tell to admire, and a story behind this quilt.  Mary’s sister found these panels in an Op Shop over in Australia, and passed it on to Mary.  She made short work of assembling it, adding extra blocks, and quilting it, all in the space of a couple of weeks.  The quilt will be gifted to one of Mary’s grand daughters. 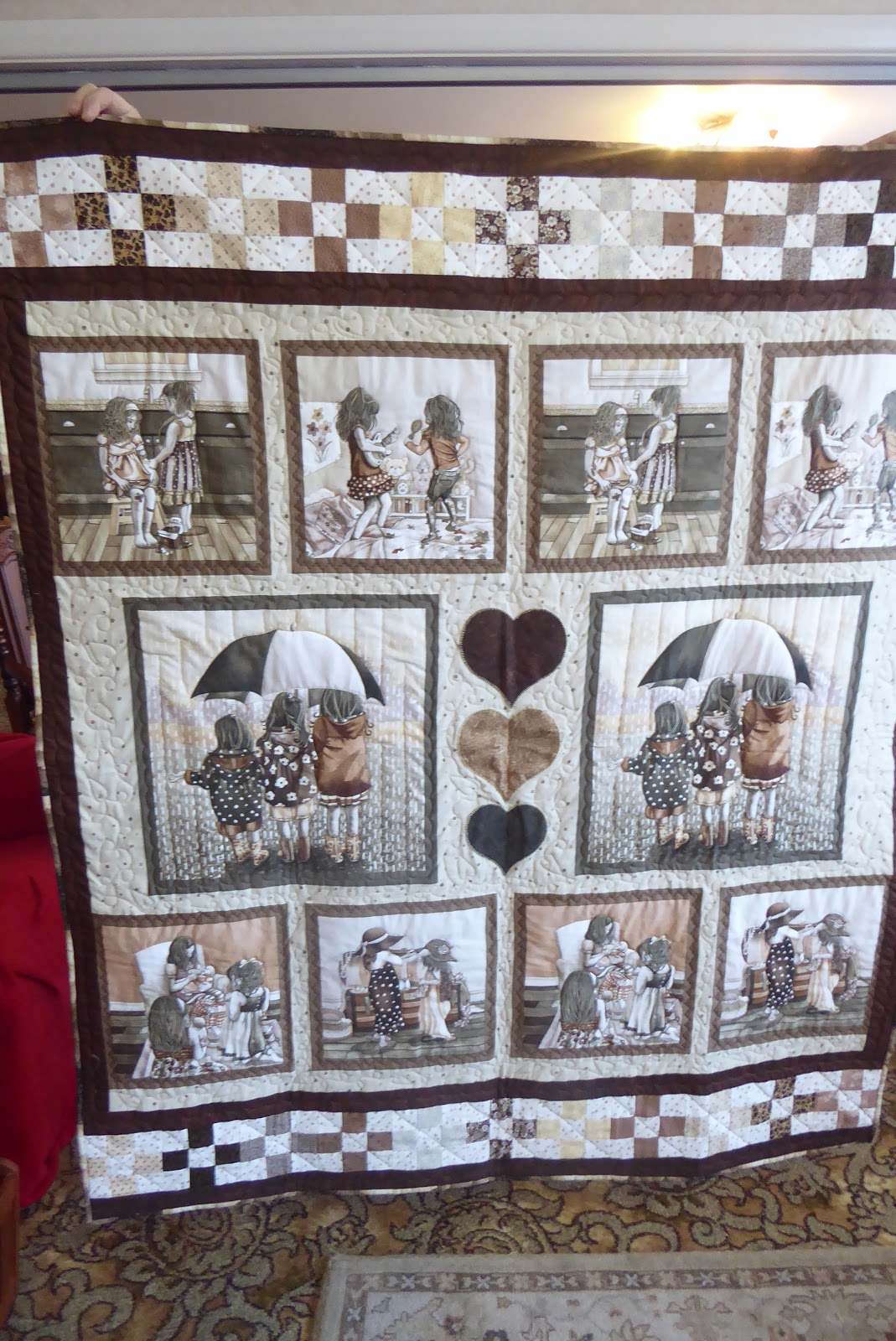 Pretty quilt made from panels

Moira had a pretty cushion to show.  Made with a pretty stitchery edged with cotton lace, it is lovely indeed. 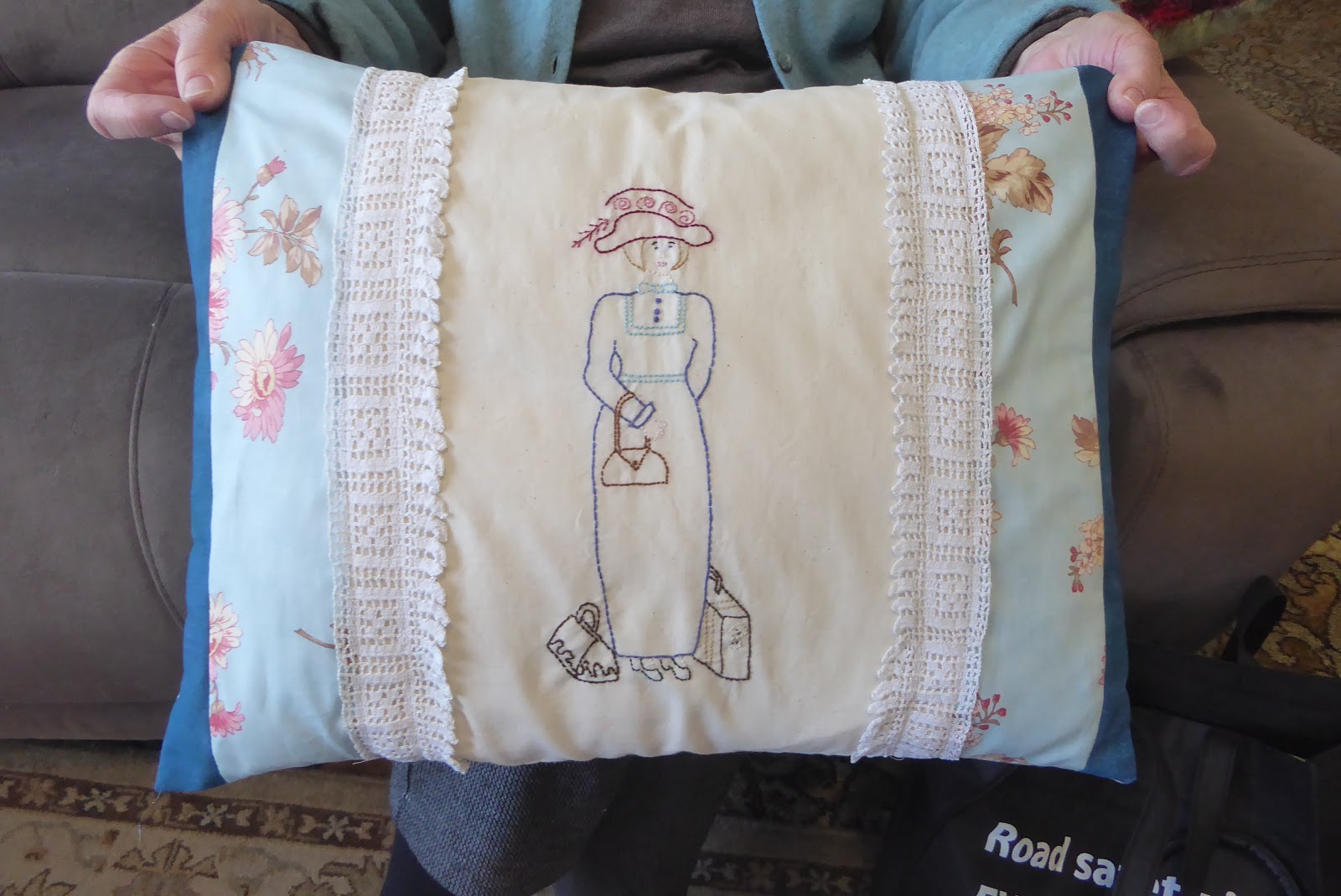 There had been a bit of knitting happening too.  Carol knits little vests to go overseas to a charity, and this one is so cute made in such pretty colours.  And Heather had been busy knitting too. 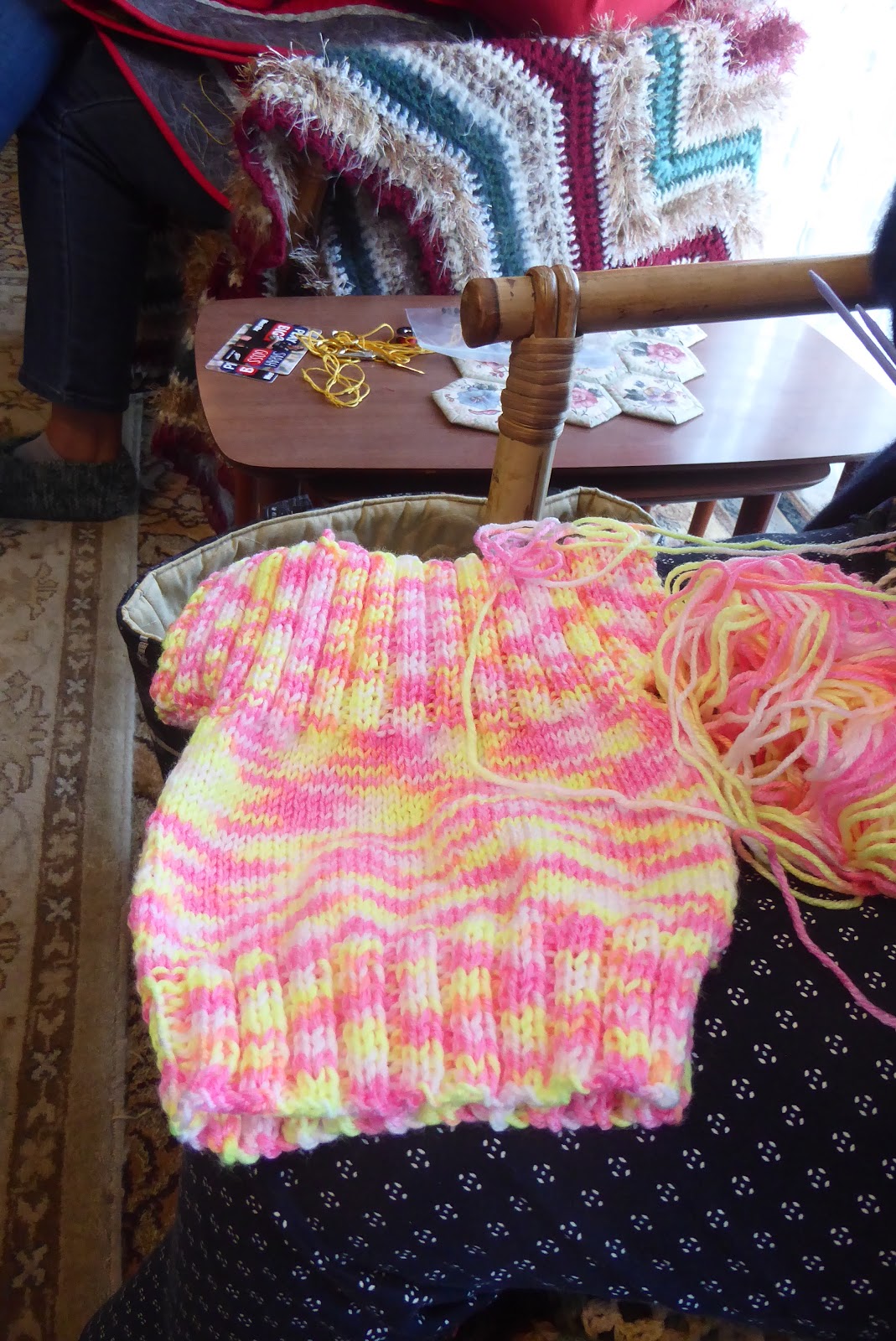 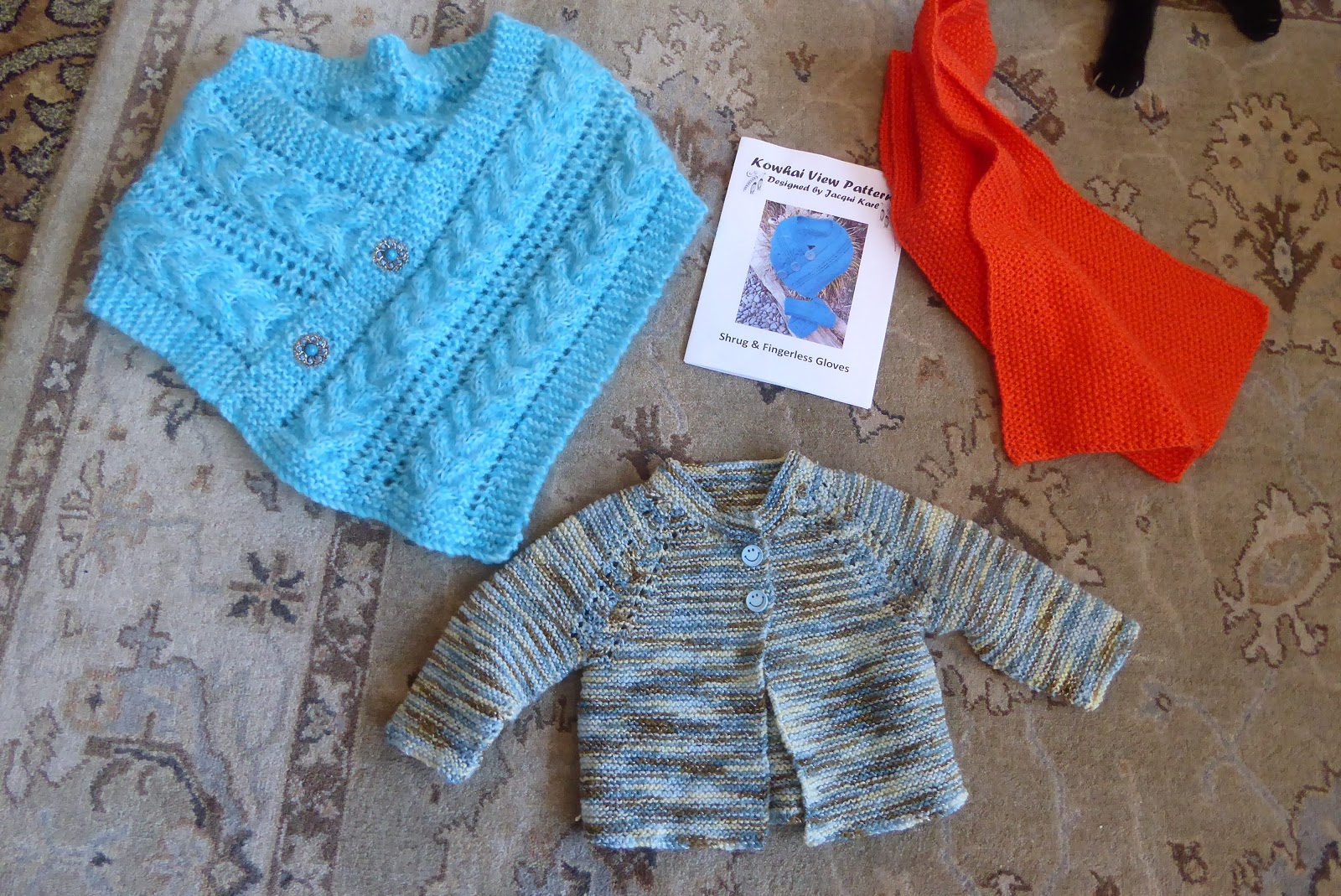 Heather had finished four knitting projects – hasn’t she been busy!

As well as a delightful morning tea, we all came away with some goodies.  Heather had been clearing out some of her sewing room “stuff” and there were patterns and other bits and pieces looking for a new home.  She also donated bags of feijoas for those of us who wanted them.  Mary had home grown goodies to give away as well, apples and peppers from her garden.  Thank you, much appreciated.

I did a little stitching on my second Santa block, he’s coming along nicely.  It’s always great to spend an inspiring morning with the Sew Wot ladies, and it doesn’t really matter if more talking than stitching happens!
Posted by Jenny at 4:50 PM

Fabulous show and tell... the panels came together nicely and has made a beautiful Quilt.
Sweet cushion, cute knitted projects too.
Relaxing and catching up with your friends is great, can always stitch at home...

Great show and tell...nice to be back into your routine of stitching with friends again. I love hte wee poncho - now that's a great idea..!

So many lovely goodies. Great to be back with friends.