Our two-weekly get together rolled around again, and this time we met at Carol’s home.  Carol lives down a long driveway, and I have to admit that I couldn’t quite remember which flat was hers, and knocked on the wrong door!  Silly me, I was lucky that Carol was keeping an eye out and rescued me.  Navigation is not my strong point - I’m the type of person who loses their car in the big car parks.  Please tell me that I’m not the only one who has this problem. 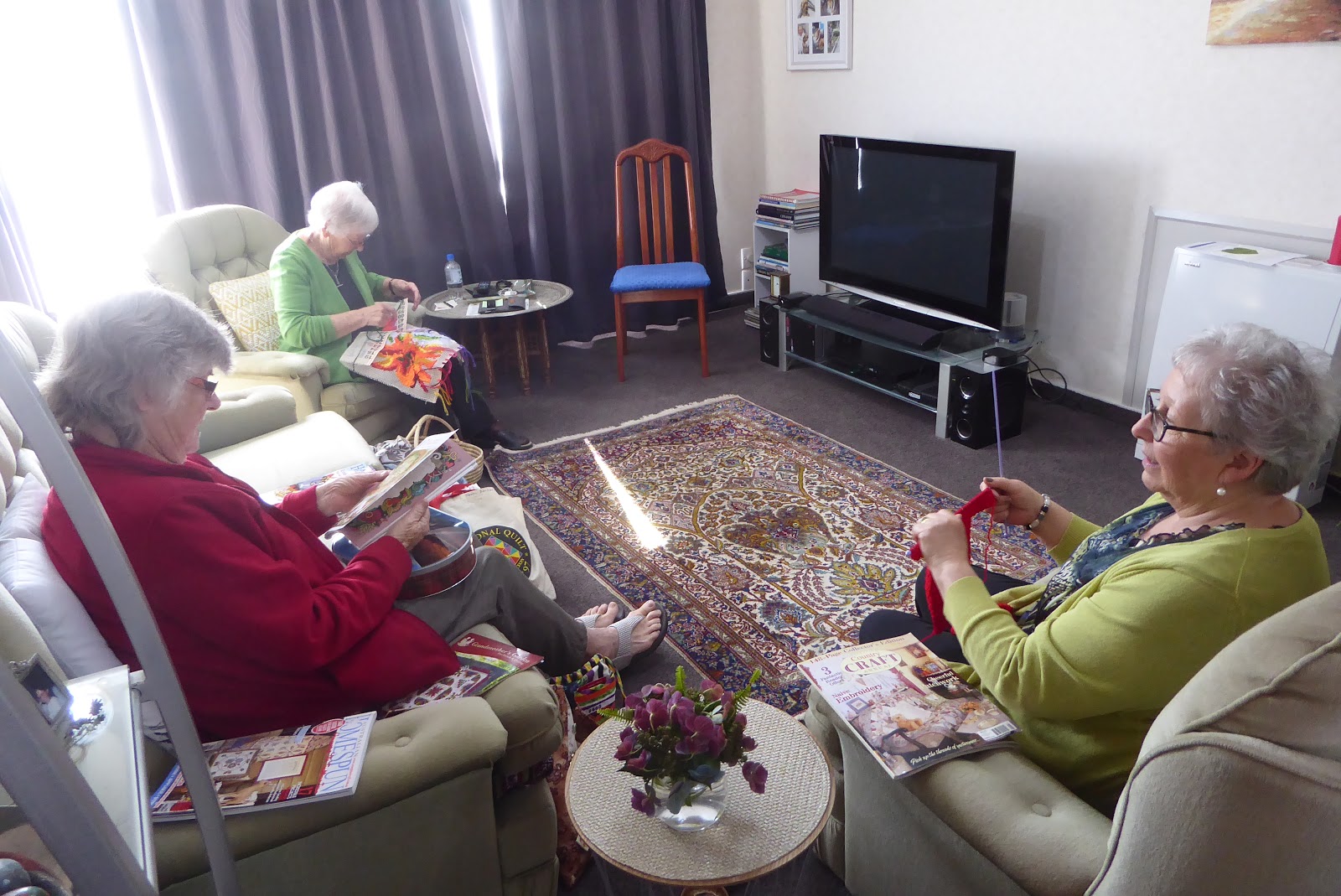 With a couple of our ladies away, there were just four of us.  We spent the morning chatting, catching up with news, looking through the pile of quilt magazines, and doing a little stitching.  At least, the others did, I didn’t even get my project out of the bag.  But I did have my two little cot quilts for Show and Tell.

Morning Tea was delicious.  We were the guinea pigs to try Carol’s new savoury pinwheel recipe and they were so nice and tasty, and hot from the oven. So tasty, that one wasn’t enough! 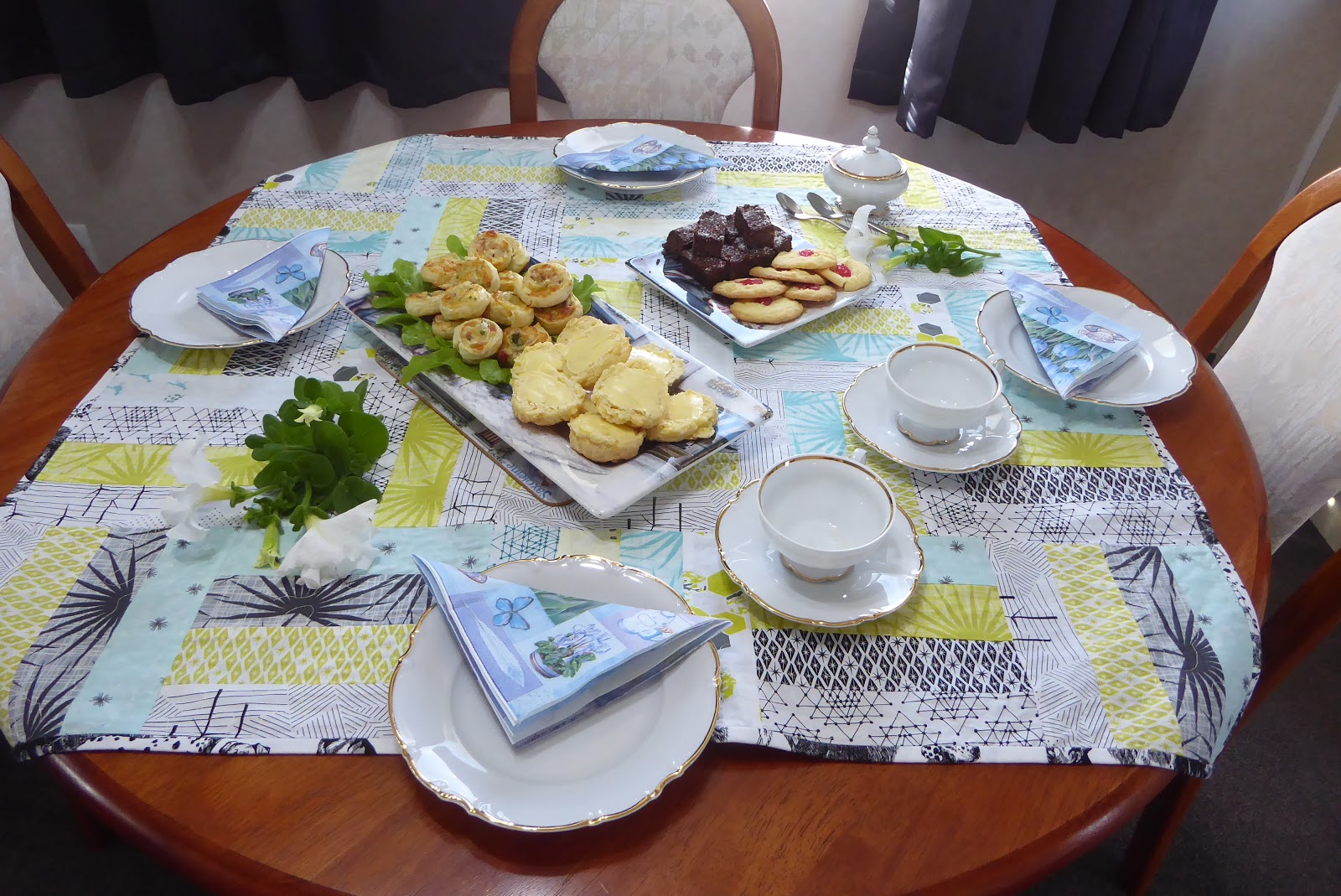 Morning Tea for the ladies

There was no more Show and Tell from the others, so Carol brought out several tops which she had stitched and tucked away, and were waiting for the next step.  The House Quilt was done as a “sew-along” group project, and will be going to a grand-son, I was told. 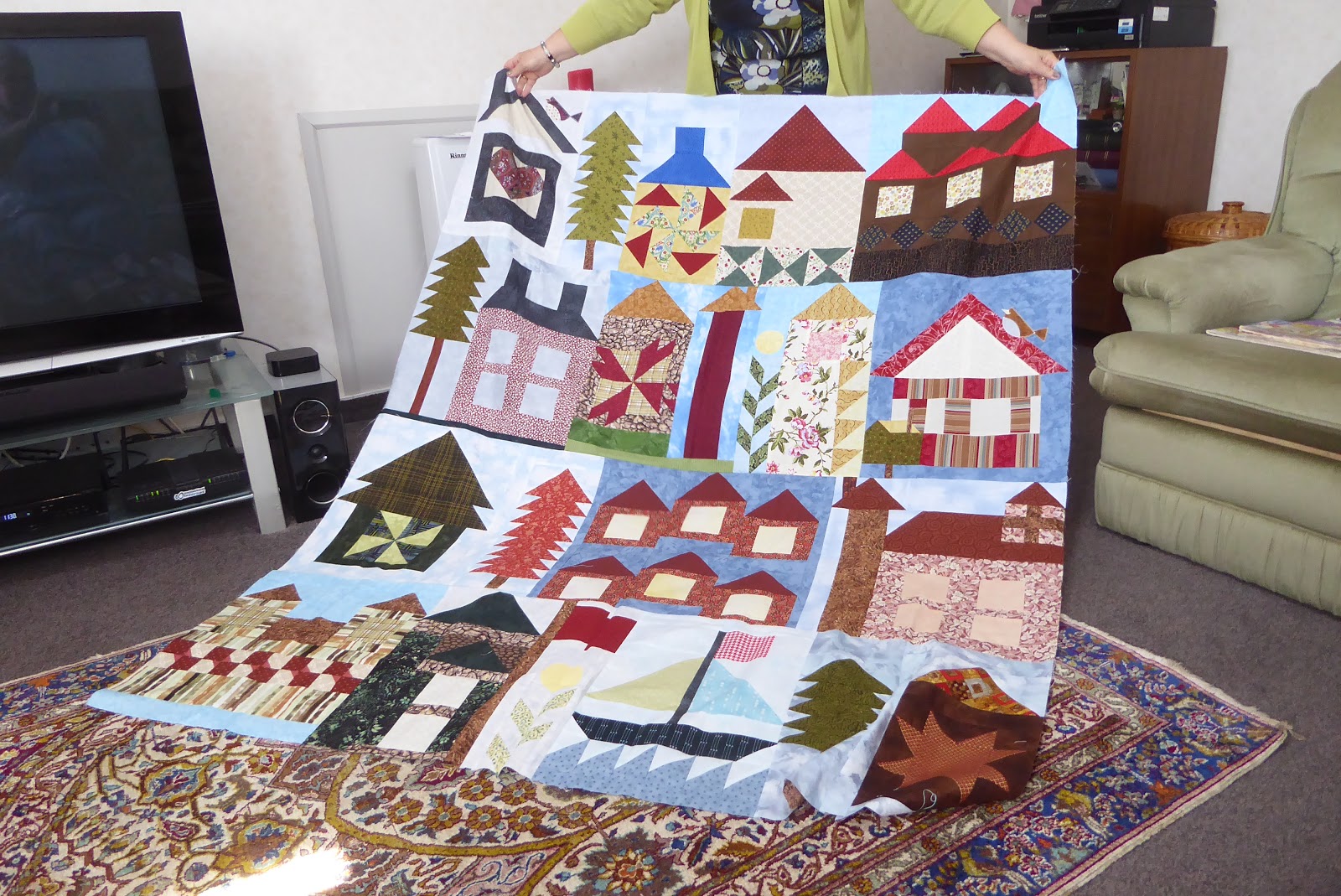 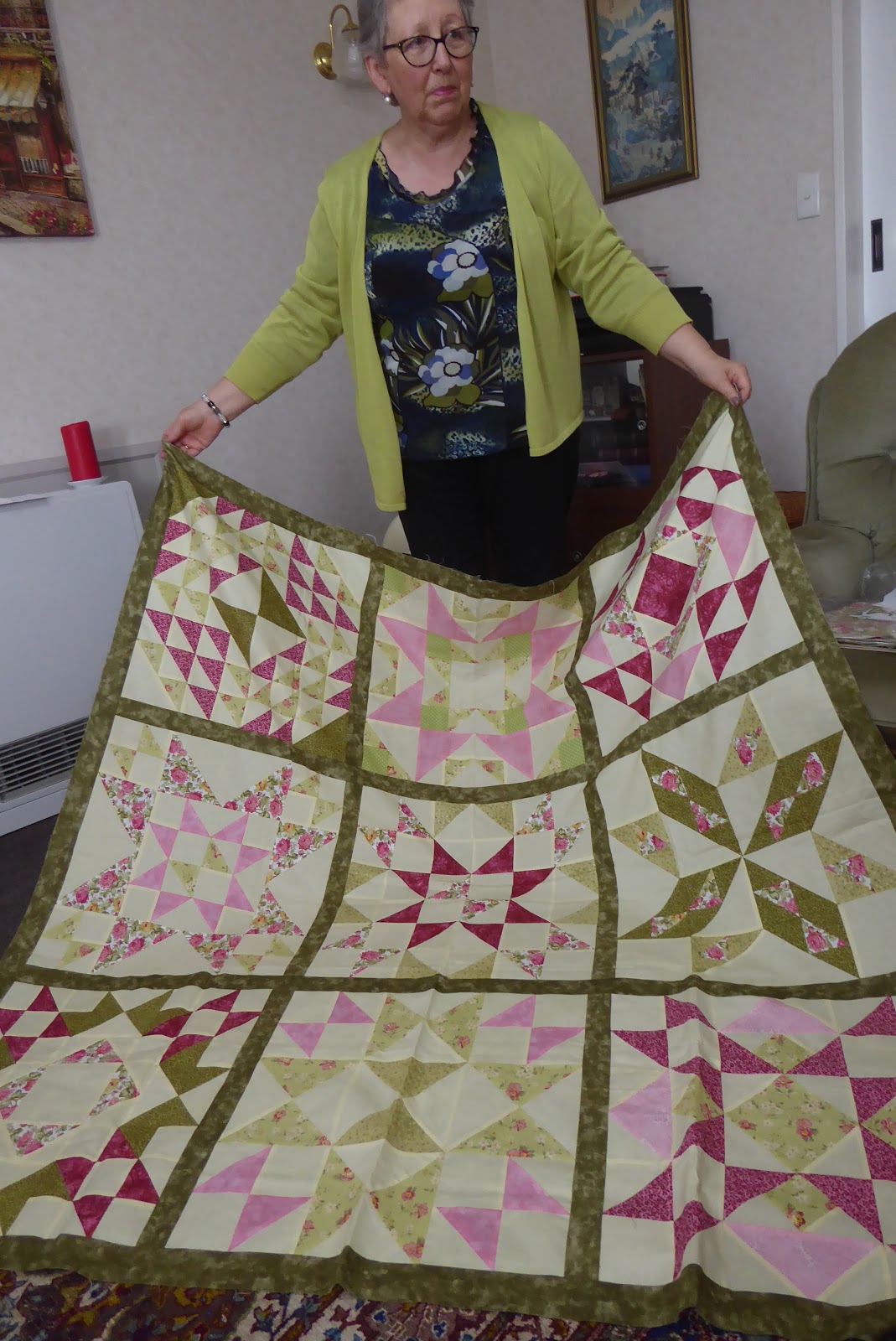 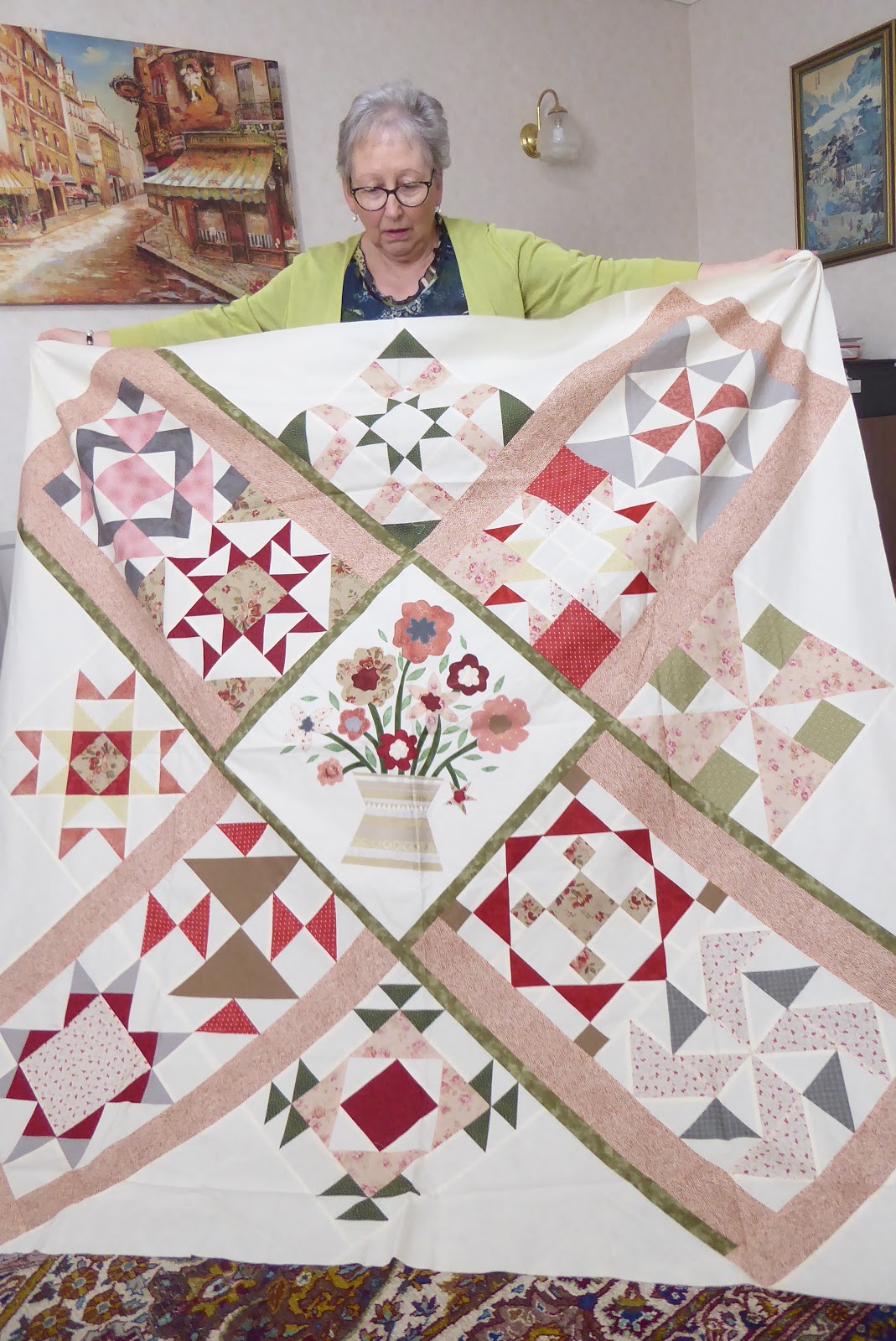 Carol’s tops, waiting to be finished

This will be my last Sew Wot Tuesday for a wee while, as we are heading off on a three week road trip very soon.  I’ll be sure to pack my stitching bag, but I may or may not have any spare time.  But it is better to have a hand stitching project or two, just in case, I always think..
Posted by Jenny at 4:18 PM

What a great way to spend the day! Morning tea looks amazing and the quilt tops are wonderful! Have a lovely and safe trip.

Stitching days are the best. What beautiful show and tell from your friends. Enjoy your travels xx

What a nice way to spend the morning. The table of food looked delicious. I agree that you have always got to have some hand stitching while travelling. Some of mine has travelled all over the place and not been worked on, while at other times I’ve been quite productive.

Always lovely to get together even if you do not stitch.

have fun on your upcoming road trip - for you it is autumn and that is a wonderful time of year to travel usually.
Your morning quilt group with tea looks nice and enjoyable. I too tend to get lost in large parking lots and have now tried to park in generally the same row at the grocery store so I don't forget where my car is LOL - straight out the door and almost to the very end of the row to get more steps in!! For each store that I am a fairly regular customer at I try to do this and then I don't forget where I am!! LOL - some of the parking lots are just so big

Such a lovely set table with delicious treats for your morning tea ...
Great show and tell.
Have a fun trip...

No, you are not the only one who can lose a car in a parking lot, as I've done that myself a time or two. The gathering and tea at Carol's looks like it was very enjoyable. Safe travels on your next adventure.

Lovely quilt tops show!! i hope you have a fun trip...hugs, Julierose