Gemma is doing her bit to help me while I’m blogging.  As I’m tapping away on the keyboard she is keeping the lap top bag warm and secure as she stretches out on her back.   Basking in the sunshine is something that cats certainly enjoy. 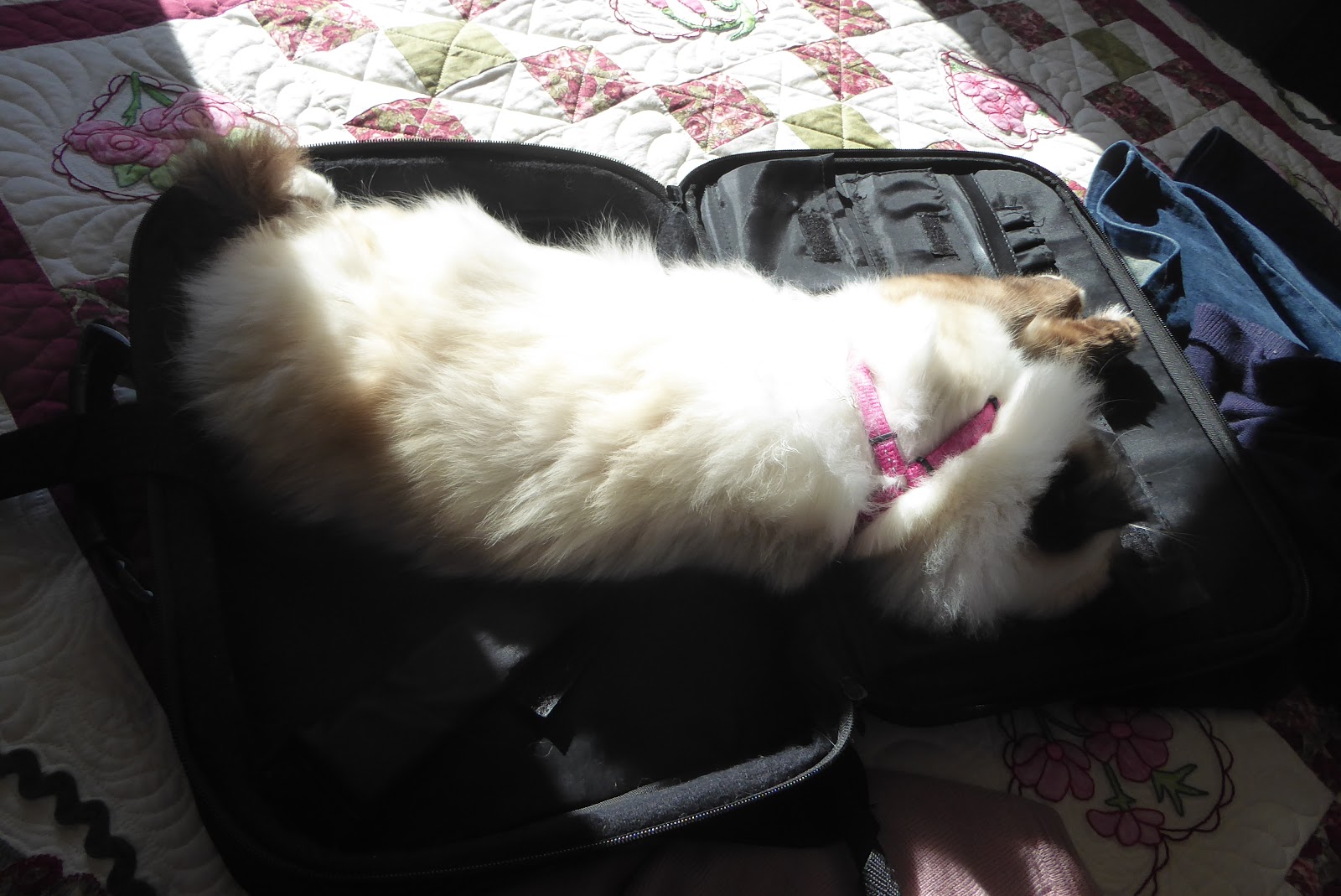 Our road trip continues, and we took a trip to Kairakau Beach, a rather rugged coastline with plenty of good fishing we were told. 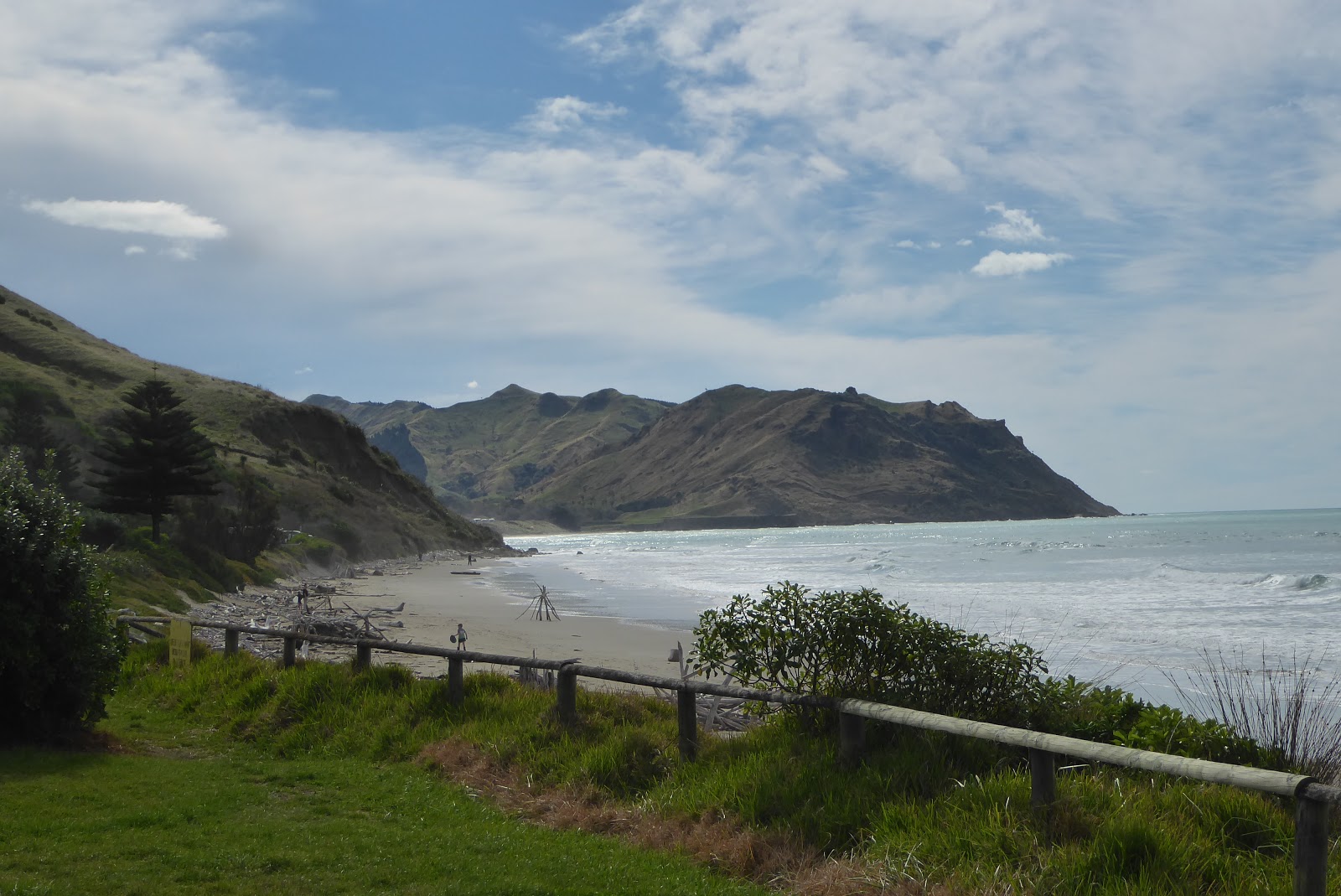 Then stopped off at the local pub for lunch.  Fish Chowder was on the menu so that was what I chose.  So tasty, and served with garlic toast, yummy! 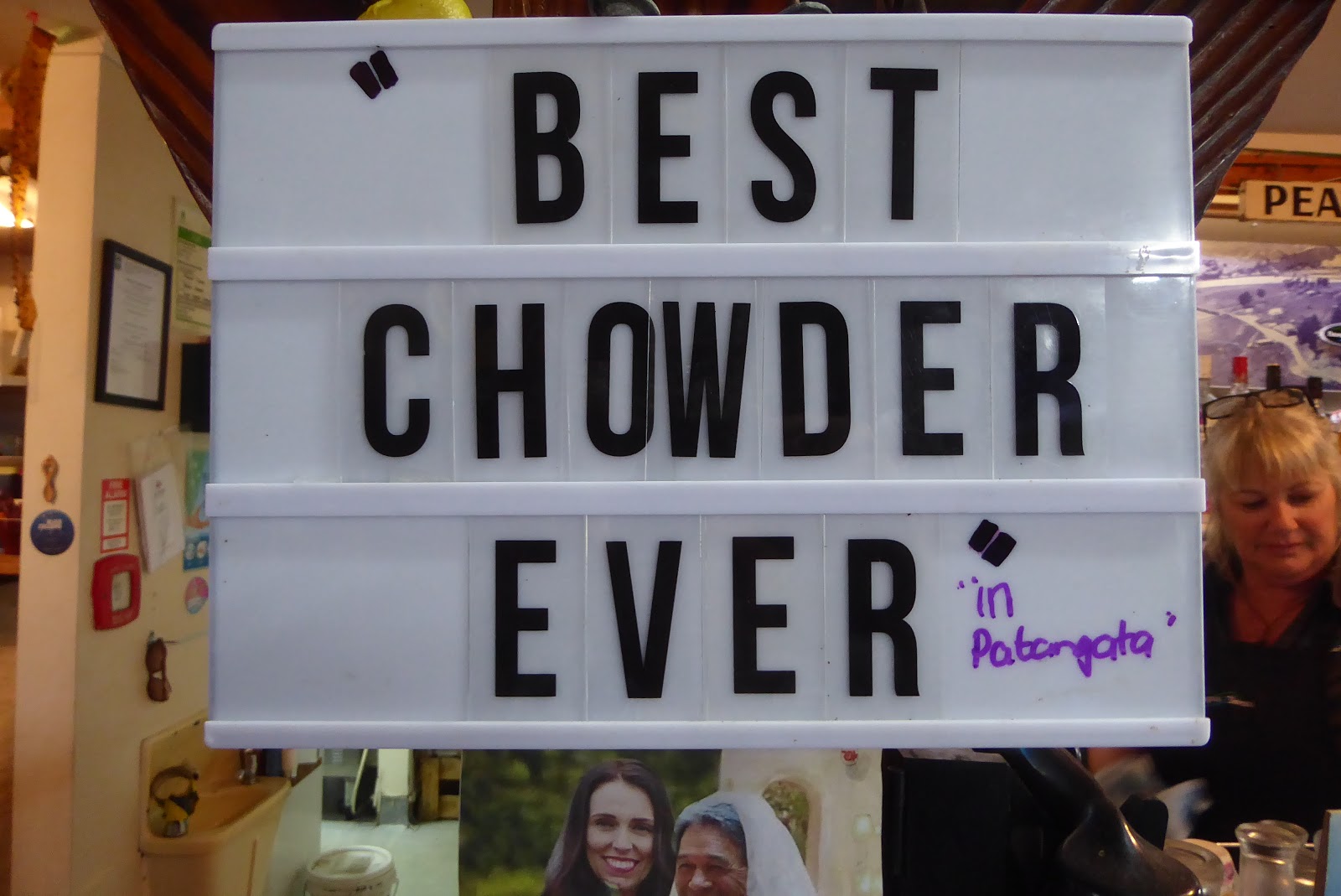 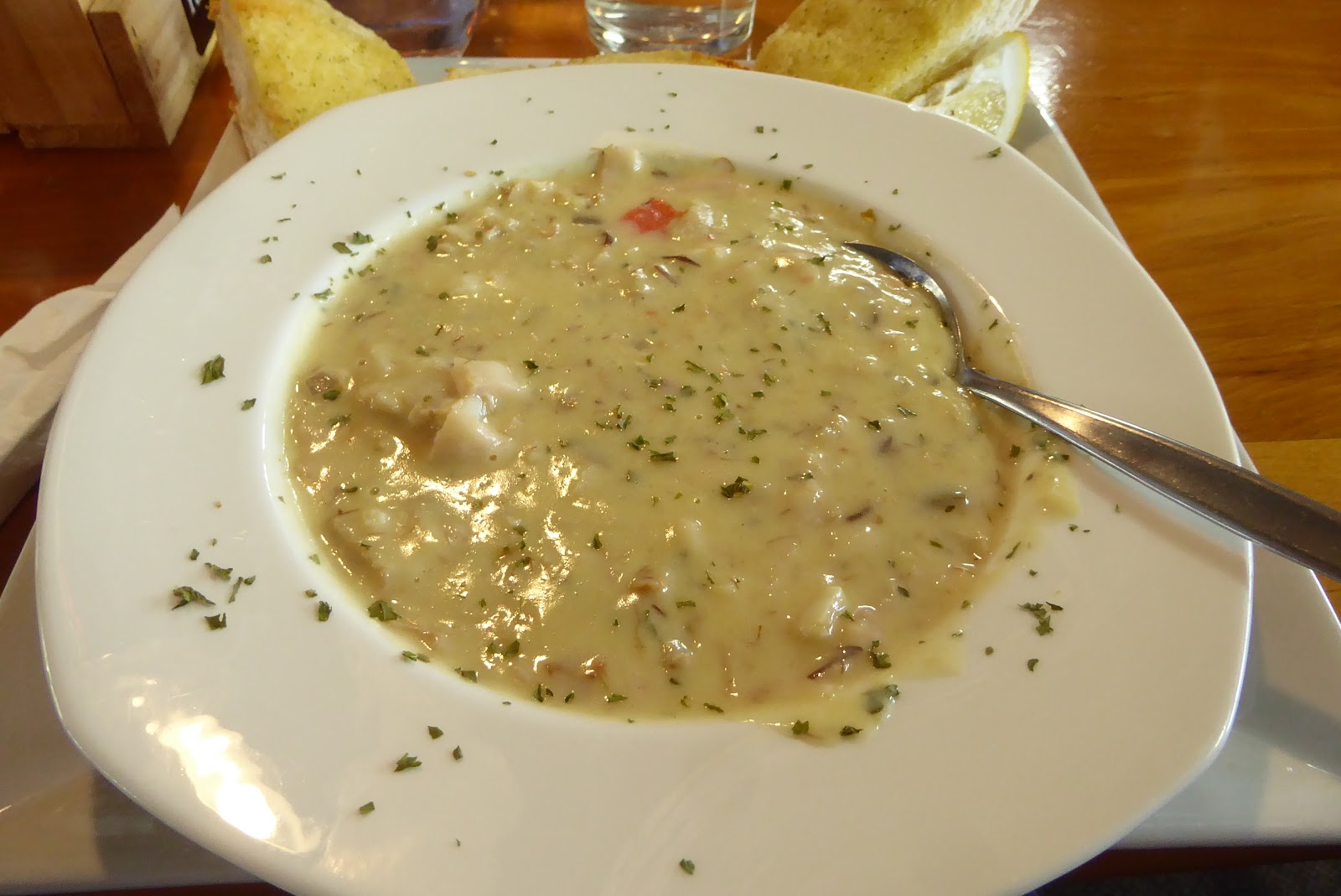 My lunch at the Patongata Pub

A visit to the historic Napier Prison had been on our wish list for some time.  This was the first prison to be built in New Zealand, opened in 1906  and held approximately 50 prisoners.   The historic prison is located on Napier’s Bluff Hill, close to the old quarry where the inmates used to work their hard days’ labour to build the walls that would keep them imprisoned.  Conditions were tough in the early days, and convicted murders paid the ultimate price for their deeds.  It is believed that there was a Circuit Judge who travelled around the country delivering the hanging judgement to convicted criminals.  He was accompanied by a horse and cart, several workmen and court officials, and the materials to built a kit set gallows at each destination. 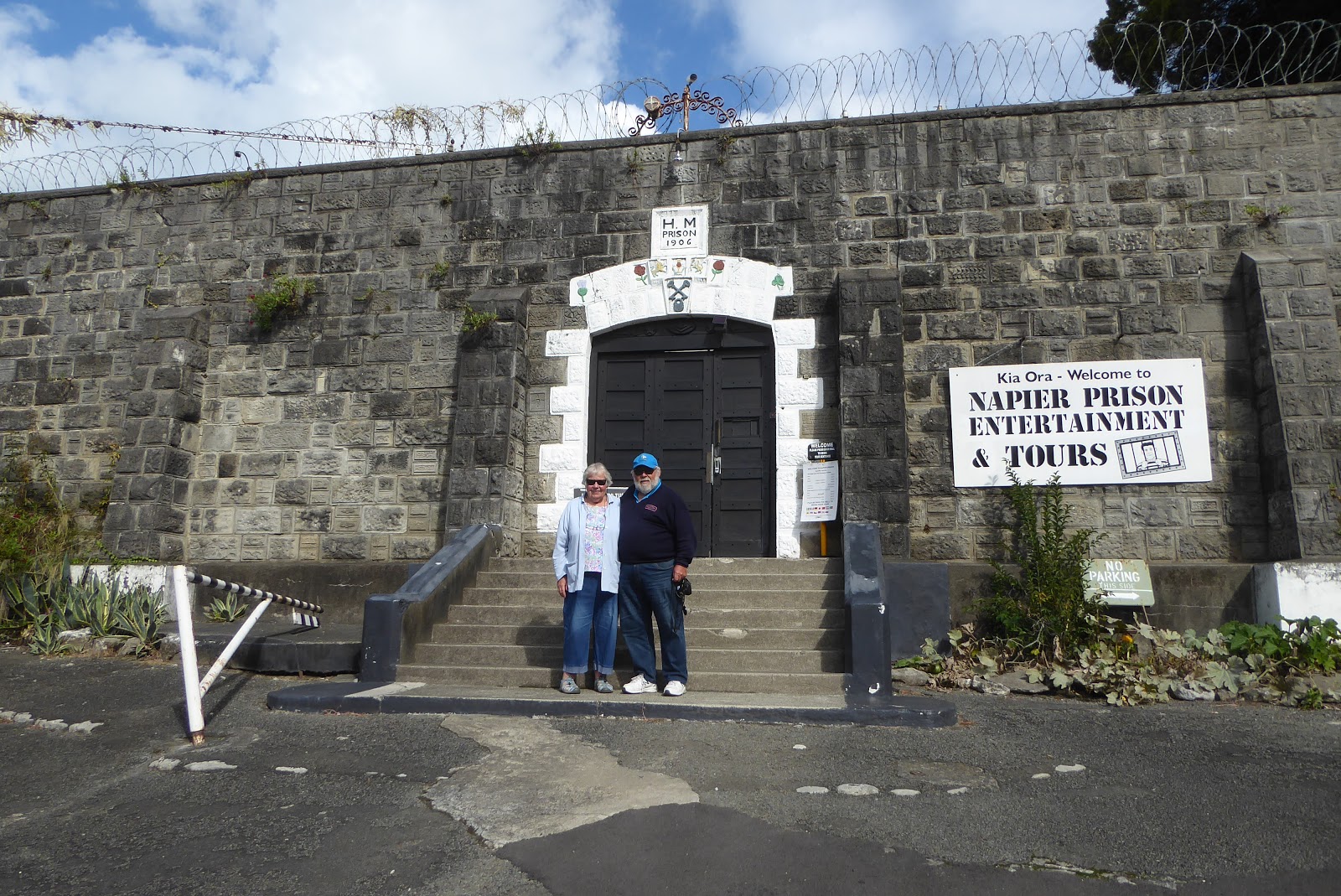 On a lighter note, we heard of prisoners making a break to freedom.  In order to aid escape one prisoner left his boots as a decoy in front of the toilet, and escaped down the drain.  This scheme was attempted later by a particularly fat prisoner who got stuck in the drain for three days.  He had to be rescued by the fire department using copious quantities of detergent to get him out.

Traveling on to Taupo, we stopped at the Lookout over the lake at this glorious view.  Looking across Lake Taupo at the mountains in the distance. 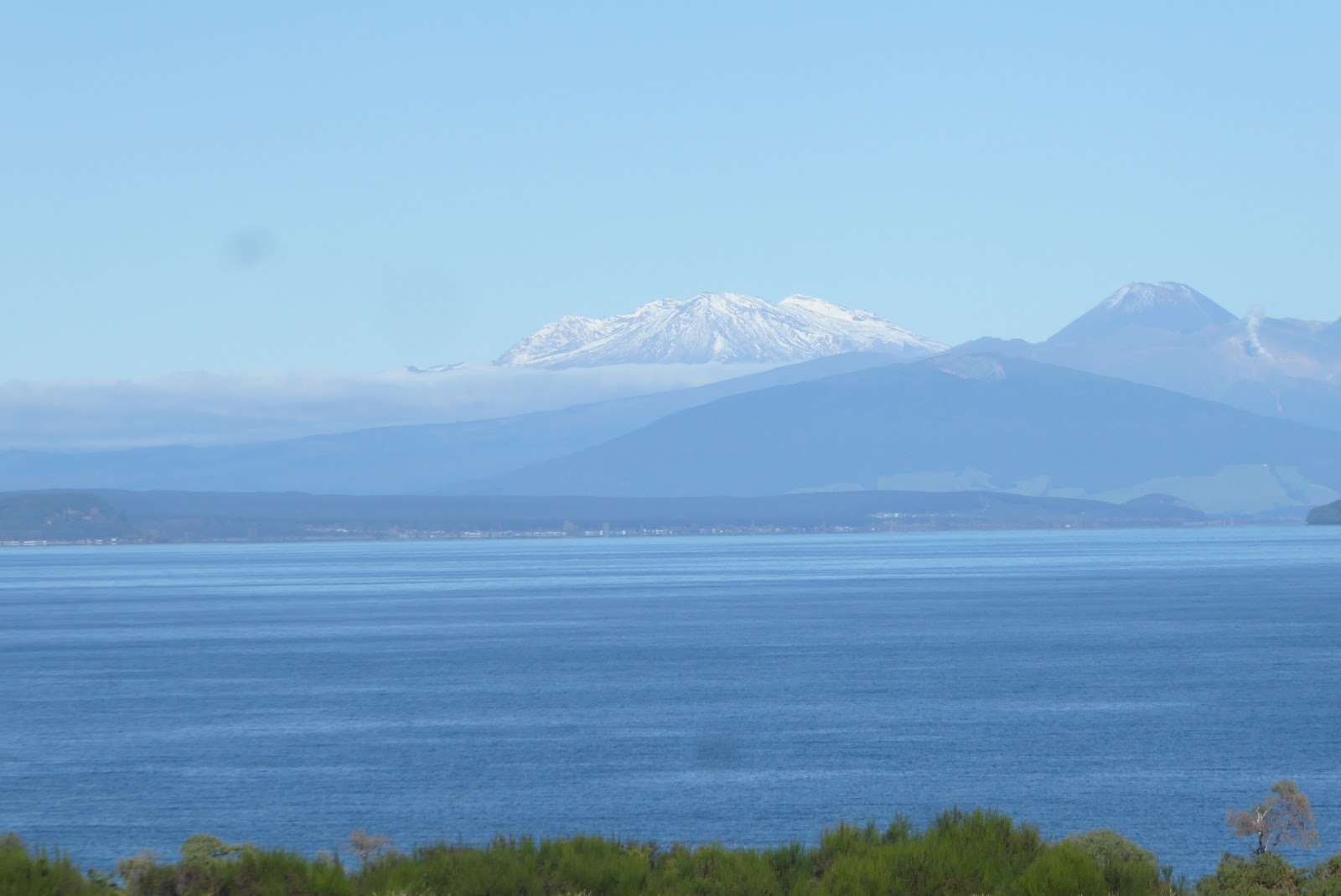 Lake Taupo and the mountains

Next stop was Rotorua, and I couldn't put it off any longer, it was time to find a laundromat.  It was another lovely sunny Autumn day and the laundry soon dried on the clotheslines in camp. 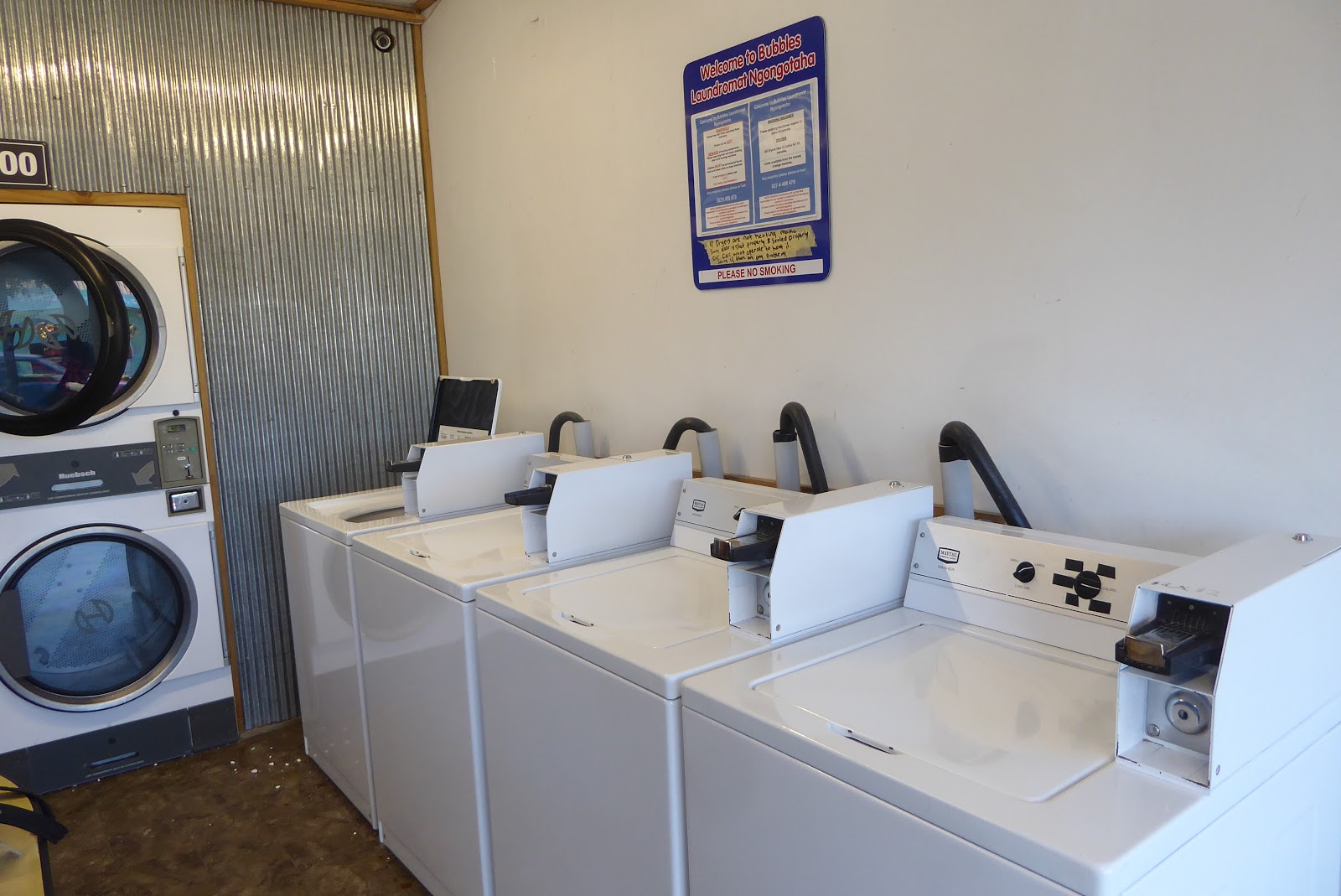 Rotorua is a very active thermal area.  After doing a little shopping, we stopped off at Kuirau Park and joined the many tourists walking around admiring the hissing, steaming, bubbling vents.  Back in 2001 there was a hydrothermal eruption in Kuirau Park with mud and rocks the size of rugby balls flying in all directions. The rocks snapped branches off nearby trees like they were mere twigs and the nearby road and cars were covered in mud. Keep to the paths, the signs say. 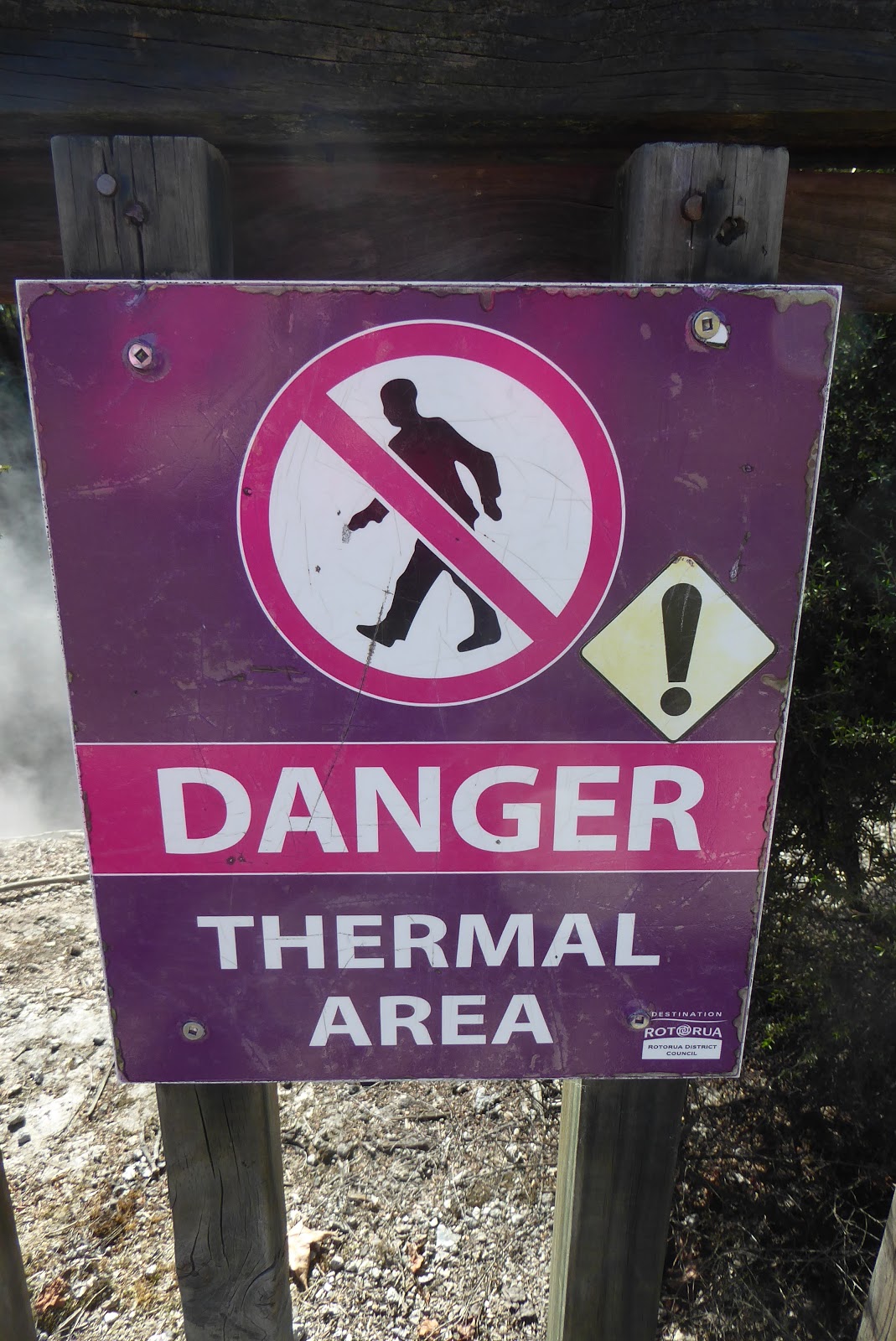 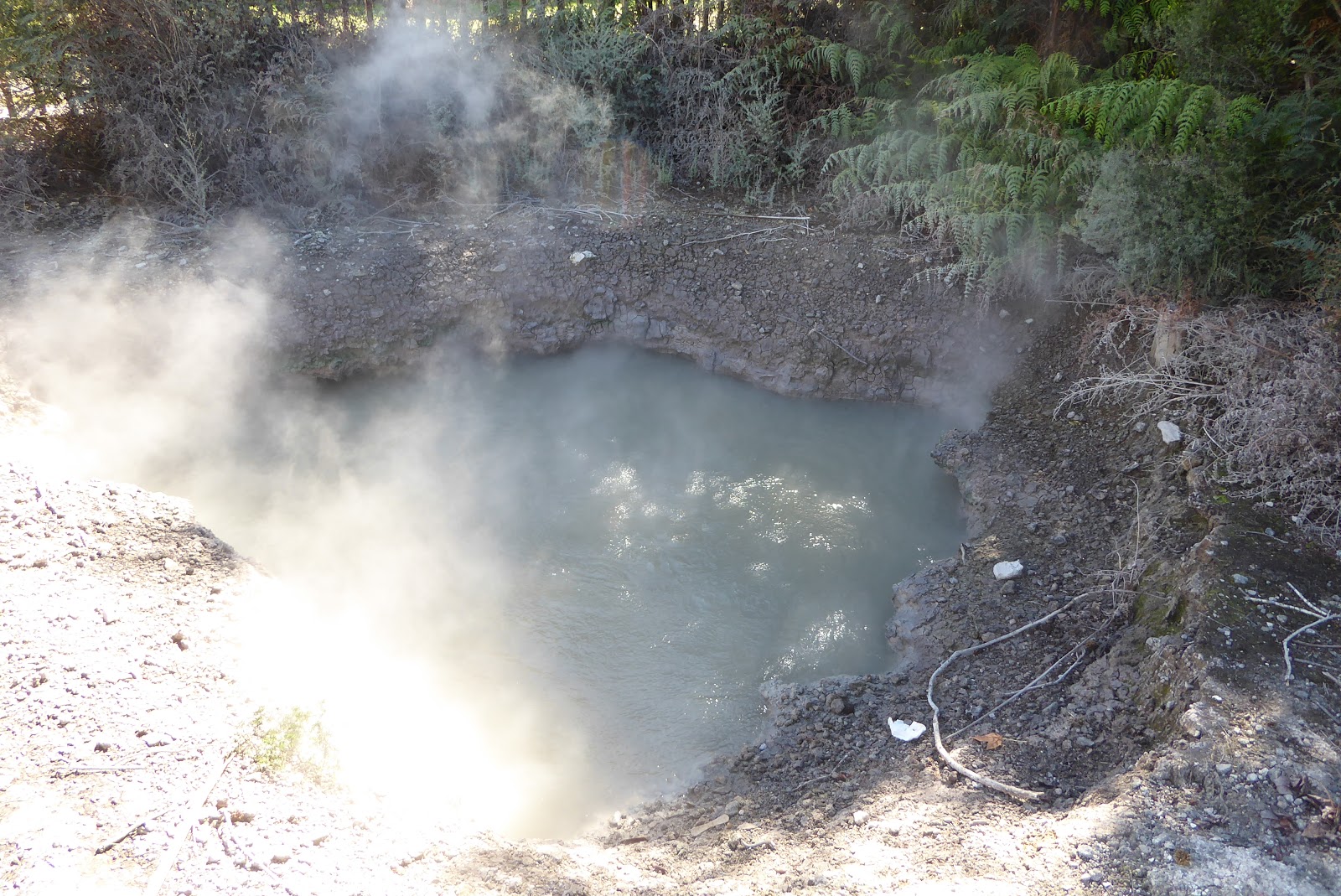 Hard to see, but there is a boiling pool of water under this steam

I’ve only done a tiny bit more stitching, not enough to show really, so no photos just yet.  We will be moving on tomorrow to stay at Mt Maunganui over Easter, so I do hope the Easter Bunny comes calling.
Posted by Jenny at 3:21 PM

it looks like you are having a great trip. We too have found some interesting sites when we travel like old prisons and forts and things - some have some humorous stories
like the prisoner stuck in a pipe - guess he should have measured it first LOL

Beautiful scenic views! Happy to see the weather is cooperating with your road trip. Wyoming (my state) has numerous thermal areas. Unfortunately, many visitors don't take the warning signs seriously.

Gemma has a good spot to take a nap.
Lovely scenery on your trip and pleased you enjoyed the fish chowder for lunch.

I tried to look closer at Santa's Beard in your last post Jenny, to see how it is stitched. Is it filled in with running stitches, very small? Looks perfect.
As always, I love seeing your travel photos...yummy chowder as well. Prisons are actually fascinating places surprisingly.

Looks like lovely travels. Great area to be in.
The chowder looks delicious!