Did you know that New Zealand can claim to have a modern day dinosaur?  We saw one of these living fossils recently when we visited Nga Manu Nature Reserve.  Peering into an enclosure, we saw  one sitting still, as they do, basking in the sunshine.  There were several young ones in another enclosure, but they we too small for us to spot as they hid amongst the greenery. 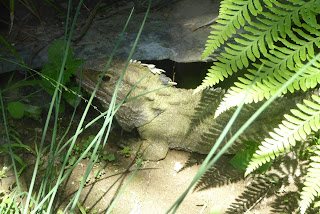 Tuatara showing the spines on his back

Tuatara are the only surviving members of the order Sphenodontia, which was well represented by many species during the age of the dinosaurs, some 200 million years ago. All species except the tuatara declined and eventually became extinct about 60 million years ago.  The endangered Tuatara are New Zealand’s largest reptile, with adult males measuring up to about a half metre in length and weighing up to 1.5 kg when fully grown.  The male has a distinctive crest of spines running along the neck and down the back, which he can fan out to attract females or when fighting with other males.

Another rather rare species was the Tecomanthe vine which was climbing all around a frame by the entrance to the tuatara display.  Amazingly, we read that only one plant has ever been found in the wild, on Three Kings Islands.  Luckily it survives as a popular garden plant, and this well established plant was covered in clusters of large cream flowers. 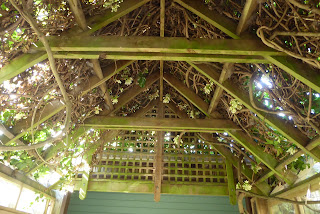 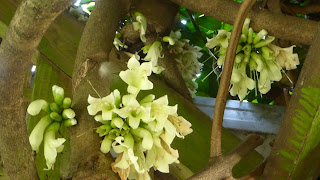 A charitable trust, Nga Manu Nature Reserve has become a sanctuary for up to 60 different bird species, many free to come and go as they please. It plays an important role in wildlife breeding programmes, working alongside DOC and the SPCA to provide recovery care for injured native birds.  Walking through the aviaries we came face to face with a Kaka enjoying his breakfast.  The kaka is a large forest parrot and feeds on a wide range of fruit, insects and nectar.  His neighbour, the Kakariki,  a small parrot with  bright green plumage and the red pattern on its head was also enjoying the morning sun shine. 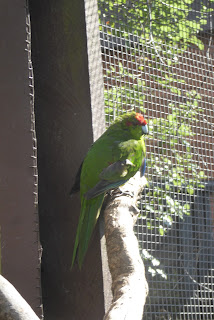 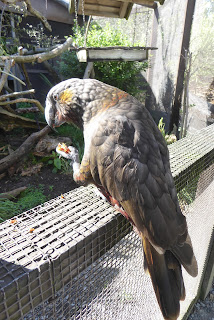 Some of us walked up the hill to the Lookout.  From here we had great views over the reserve, and waving back at us were our friends down on the flat ground.  The reserve is set in the remains of lowland swamp forest and is full of native birds flying free.  We couldn’t leave without a group photo, and arranged ourselves around the swan sculpture.  As you can tell by Robin’s shorts and the men in hats, it was warm and sunny, and we couldn’t have had a nicer day for a visit to the reserve. 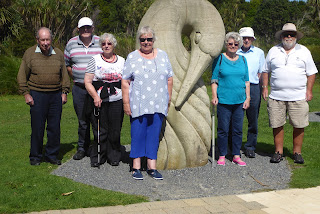 Proudly hanging in the Visitors Centre was a quilt featuring New Zealand wildlife.  It’s always a bonus to see a quilt when we are out and about. 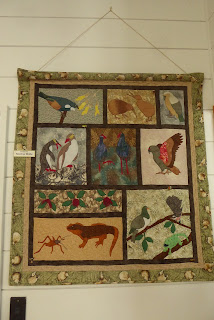 No wonder it looked familiar, I have one just like it at home!  Arranged slightly differently, and done in different shades, they both show case our native birds and yes, that is a tuatara on the quilt. 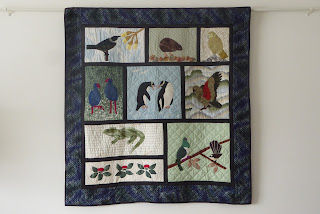 My quilt at home

Lunch in a local café followed our visit to Nga Manu Reserve, the weather was excellent, the food and company were great, and it was fun to catch up again with everyone.
Posted by Jenny at 3:38 PM

Hi Jenny oh what an interesting post and those quilts are stunning,thankyou for sharing your wonderful time,great post my friend xx

How lovely to go to the sanctuary. Right up my street. Neat to see your quilt twin there too. Beautiful sculpture! Thanks for sharing your day xx

we love visiting those type of places - preferably on a cooler day - the heat can really get to me and I have to keep seeking shade! The little green "lizard" is really cute isn't it

I enjoy reading of your trips and adventures. Seeing a quilt, similar to yours, "in the wild" is great fun.

You always have such great days out and show us lots of interesting things you see, thanks...

A lovely day out. Beautiful setting and the quilts were a bonus.