I was getting near the end of machine quilting Summer Kites, it just  needed some more quilting in the blank spaces surrounding each kite.  But what to do?  In the end I decided to straight line quilt this way and that as suggested by the nine patches in the kite block. 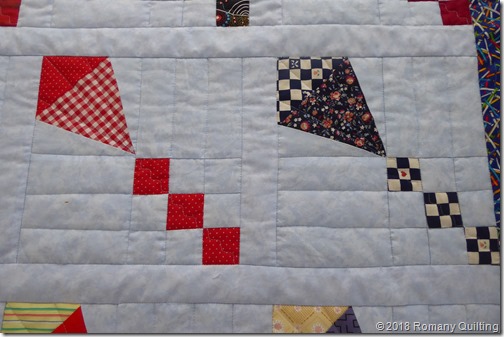 Blocks all quilted
With the borders quilted, and the binding attached,  I turned the binding over and pinned it all down.   Really, I reminded myself,  I must invest in some of those binding clips which everyone except seems to use, one day. Then I was all ready to sit and hand stitch the binding down to the back side of the quilt in the evening, keeping Robin company as he was engrossed in a rugby game on TV.  And got this last job done in the evening, thank goodness. 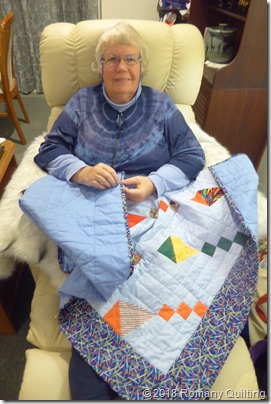 I’d rather be stitching than watch sport on TV
So here it is, Summer Kites, all finished. Rather a long winded UFO, if I do say so.  I took part in a BOM competition way back in 1995, and won half of the blocks. The pale blue fabric was supplied, and it was suggested that we incorporate spots, stripes, or checks in our block. After the excitement of the win, they were put away and forgotten about till earlier this year, when they were rediscovered, and added to my List of Six.  I received ten blocks back, and made two extra to make a three by four block setting.  Luckily I had purchased a little extra of the background fabric way back then.  The kite blocks make a nice cot sized quilt, and I will tuck it away until a baby boy quilt is needed. 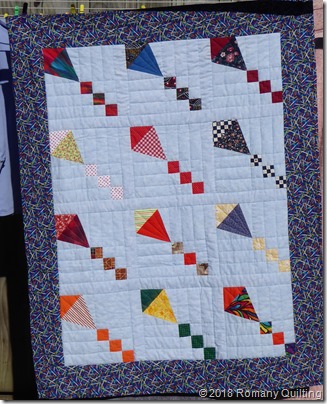 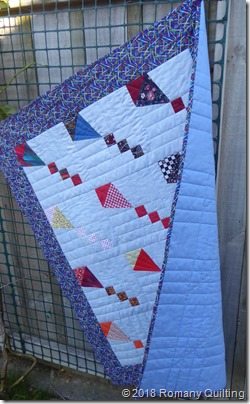 it turned out really cute and I bet you are glad for it to be finished! I rarely watch sports and lucky my DH doesn't either

I love how your quilt turned out Jenny. Hopefully, you don't have to wait too long for some lucky little boy to show up. :)

I have seen photos of the binding clips, I think they would be so handy instead of pins. Love the blues, all good quilts take time.

It's lovely! The straight lines adds and accentuates to the design. I recommend the clips: I use them for binding, for keeping block pieces together, for marking the end of stitching and much more. The clips rarely fall off like pins often do.

Oh you really did a lovely job on this;))) I really like that blue (sky) fabric in the background--how apropos!
I like to quilt at night watching baseball--but have to have really good lighting to quilt at night I find...(these olde eyes and all)
Hugs for a lovely weekend...Julierose

Love the photo of you stitching, Jenny. And Kites is wonderful!

What a lovely finish.

summer kites a fresh and summery project and lovely to see you stitching away Jenny. You are an inspiration with your UFO finishes. Looking forward to meeting Gemma. Heather B

A great finish. The extra quilting was all the blocks needed and not too difficult. It’s the perfect weather for sitting under a quilt to sew on the binding. I wonder how long it will be before you get a certain little lady wanting to help with such projects.